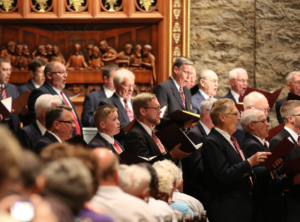 No seat was left unfilled at the Grace and Holy Trinity Cathedral Friday night, with the standing-room only crowd anticipating the singing of 125 members of the Kansas Mennonite Men’s Chorus.

“I’m thrilled with the turnout. It was an energized concert. I’m excited for the men,” group director Greg Bontrager said.

The group sang a variety of traditional hymns, gospel songs, and newer contemporary music in four-part harmony. For several songs, they were joined by the brass group, Menno Brass. The performance ended with a standing ovation and the crowd clapping and singing along with a rendition of “I’ll Fly Away” and “By and By.”

The chorus in its entirety is composed of 300 men from Kansas and the surrounding states and was formed in1969 in connection with the Mennonite Central Committee (MCC) to raise money for the organization’s service work. The group has raised over $700,000 since their formation through donations and the sales of their albums.

The group is diverse in both age and denomination. According to director Greg Bontrager, “There are many Mennonites [in the chorus] but also many men from other Christian denominations. The men in Kansas can join us no matter who they are.” Member Harold Bray stated that he enjoyed, “Being in fellowship with a bunch of Christian guys. The Lord is here with us.”

According to member Marvin Schmucker, members join the group for, the enjoyment of singing. “There are times when I just get goose bumps from being part of a large group praising the Lord,” he said.