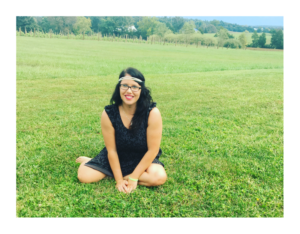 Tiara Coleman lives in Harrisonburg, Virginia. She is a nurse and single mom to two beautiful babies. Tiara loves working on her Jeep and going off roading in it. If she has to be indoors, she loves watching football (the Dallas Cowboys to be exact). This past fall Tiara organized a suicide prevention and awareness vigil in Harrisonburg to support those who have lost someone to suicide and those who struggle with mental illness on a daily basis.

Tiara first shared her story during chapel at Eastern Mennonite High School (EMHS) in Harrisonburg, Virginia and appeared first online on the Anabaptist Disabilities Network’s Opening Doors blog. Her willingness to share candidly about her experience with bullying, depression, self-harm and suicide is courageous … to put it mildly. When asked what led her to share her story with others, Tiara said that the negative attitudes and mistreatment of those who have attempted suicide, even within the church, is so painful. She hopes that by sharing her story more people will be able to find help and support.

Encounters with Bullying, Assault and Depression

I grew up in Harrisonburg, Virginia, and come from a well-known Mennonite family. I moved from the local public high school to Eastern Mennonite High School (EMHS) at the start of my sophomore year. This is when I remember life started getting really hard for me.

Even though, like many of the kids at EMHS, I came from a respected Mennonite family (my grandfather was the high school principal, my uncles were well-known soccer stars and my mom was a teacher), I felt different than the kids at EMHS immediately.

I felt pressure to be smart, athletic, popular and overall successful. I just could never fit that mold … and I became singled out.

Students made cruel assumptions about me and picked on me incessantly. Classmates called me awful names like, “The Harrisonburg Whore.” I went out for the women’s soccer team, but the girls and even the coach talked about my body, telling me my weight made me slow. I was told that if I “tried harder” to lose weight, I’d be a better soccer player. I was so embarrassed and ashamed.

To add to the torture, some of popular and well-loved guys would harass me, grabbing my butt or trying to grope me when adults weren’t around. When I protested, telling them to stop, I was mocked and made fun of by them and their friends. You see, when you’re not popular or respected, people don’t seem to take you seriously.

I was so sad during those times. I didn’t realize I had depression and how serious it was.

Under the weight of my misery, I started cutting. I needed some way of externalizing the agony of my internal pain. The cutting started out on my wrists. I would be alone crying, just sobbing, in so much distress. When I cut myself, I experienced a flood of immediate release. I felt like I could understand something about my life again. It gave me the sense of control that I desperately yearned for.​

At one point, a classmate saw the scars on my wrist. She told me that she “knew” I was cutting in order to get attention. But she didn’t understand that cutting for me wasn’t about attention … it was about coping. From that point on, I started cutting under my breasts and on my thighs so that the marks wouldn’t be visible and draw suspicion.

At this point, my only friend at EMHS was a classmate who also cut. We found solidarity in our struggles together. However, when the school counselor found out that we were both cutting, she demanded that the two of us be kept separate at school. I guess she thought this would help and discourage the cutting behavior, but it only made my isolation and grief all the greater.

I attempted suicide twice in my junior year, both times by swallowing a bottle of pills. The first time, it turned out that I’d only swallowed a vial of vitamins … so nothing happened. The second time was scarier. I swallowed a bottle of pain killers. Looking back at that moment, I know that I didn’t actually want to die, but I didn’t know what else to do. My grades at school were miserable, and I couldn’t handle the constant disappointment I felt that I was to my mom. Feelings of failure and worthlessness had taken such a strong hold that I believed that everyone would be better off without me.

Swallowing the pills calmed me down enough to realize that I didn’t want to die. I told my mom what I’d done, and she rushed me to the hospital where nurses shoved charcoal down my throat.

It was eerily silent when I returned to school after being hospitalized. Not a single teacher or student asked me about what had happened. Maybe they were told not to talk to me about it? I don’t know. But it would have been a lot easier if I’d had support at school.

How Things Got Better

Being hospitalized made my youth pastor realize how severely I was struggling. He reached out and became the one safe and consistent person I could cling to. He did a lot of things right, and my relationship with him marked the beginning of getting the supports I needed.