Race in the parking lot 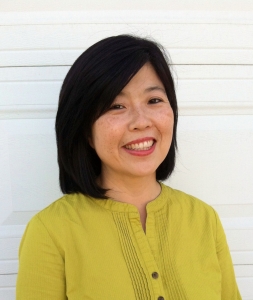 Sue Park-Hur is a Korean-American mom of a high schooler, middle schooler, and a transitional kindergartener.  Between the pick-ups and the drop-offs, orchestra concerts, and basketball games, she with her husband Hyun, co-pastor at Mountain View Mennonite Church in Upland, California .  Sue and Hyun also co-direct ReconciliAsian, a peace center in Los Angeles that promotes exploring what it means to participate in the ministry of reconciliation in the Korean and Asian American communities.

The story I’m about to share is about racism, and it’s complicated. It’s going to be long. And let me warn you, I’m angry. But oddly, anger sometimes gives me the energy to unleash the frustrations that have been in me with more clarity.

My husband and I just returned from encountering the police in front of a restaurant we frequent. Hyun had been away for several days, and to celebrate his return, the family went out for dinner. We were forty minutes into our meal when two strangers approached our table and asked if we owned a red van. When Hyun said yes, the man said that Hyun had hit his car in the parking lot. Immediately, Hyun went outside with the couple while I sat with the kids trying to finish dinner calmly. But I was anxious. I could barely swallow my food trying to figure what was going on.

A little later Hyun called me out and asked me to call the police. We needed to make a report. The couple believed that when we opened our car door, it had scratched theirs. But Hyun opened our driver’s side door to show that there was no way for the door to hit the side of their door, and clearly there was no damage to their car. The couple then changed their story and said that they now saw a scratch on their side mirror. But they wouldn’t let us see the scratch. I was puzzled at their behavior. If there was damage, wouldn’t one want to show it to the person you claim had done the damage? Hyun and I then decided that it would be best to call the police to help resolve this situation. They both looked wild-eyed and said if that’s what we wanted, to call the police. We asked what they wanted. What was it that they really wanted from us? They said they had already told us what they wanted and didn’t want to repeat it. The conversation was going nowhere.

The police didn’t come until 50 minutes later. Those 50 minutes felt dreadfully long and uncomfortable. We had three worried kids, so we called our neighbor to come and take them home. While waiting, we heard taunting remarks. They seemed to be trying to provoke us, and most certainly to hurt us. They were “talking to each other,” making racial slurs, saying,    “They just don’t understand this culture. This is America. They need to learn the culture and show a little respect.” I wanted to react to their offensive remarks, but Hyun sensed my anger and told me to stay away. I walked away from the car and went into the restaurant where we had been eating to look for any witnesses who might be willing to talk to the police when they arrived. Later, I heard from Hyun that they made many other very offensive and even violent comments “to each other.”

“If there were guns, this would have been easily solved.”

When Hyun remained silent, they laughed and said “he probably doesn’t understand what we’re saying.” How sad that when violence grows, silence is translated into permitting the other to be more vicious and debasing.

Finally the police came – a male and a female officer. The male officer took the couple aside and heard their story. Then he came to us and heard ours. He basically told us that the man wanted an apology and that no report needed to be written out since that was all they were asking for. We could make a civil report, but that meant we would have to exchange information and they would get all of ours. He told Hyun to be the bigger person and apologize. Although there was no reason to apologize, my man did say that he was sorry for the situation. I was really proud of him for keeping his cool.

It would have been good if it ended there. But the story didn’t stop there. This was the part that really got me angry. Another police car came to the scene – one male officer. The officer approached our accusers. The man said to the officer, “all I wanted was some respect and apology.”

Then the officer commented,

“You know, some cultures don’t know how to apologize. You just have to understand.”

And upon hearing that, the couple drove away.

I couldn’t believe what I heard from the officer. Before hearing our side of the story, he made a judgment. He validated the perpetual foreigner mentality that people have of Asians. He affirmed the stereotype that the couple has of Asian-Americans – that we are culturally so unassimilated and different that we don’t know how to apologize civilly in an “American” manner.

The officer claimed that he tried to de-escalate the situation by talking to them, but he in no way de-escalated the situation. He failed to recognize that in the future, when this couple encounters conflict with other Asian-Americans in their community, they will continue to express words of hate and anger with the confirmation that they received from this officer. Their attitude and actions may grow more violent the next time.

Although the officer’s intentions may have been good, the impact of his comment was hurtful and in no way helpful.

In contrast to the first team of officers who handled the situation professionally, the officer was partial, unprofessional, and shortsighted. The officer did apologize for his comment, but that was not enough. I asked the officers to make note of my comments in their report as I would also contact the police station and write to them about it.

And there is for me yet another layer to process as a person living in Los Angeles. The couple that accused us of hitting their car were African-American. The woman may have been Latina. The officers who came to the scene were Latino presiding over a city that was predominantly Asian. What we experienced tonight was complex. How do we go about naming such experiences? How can we address the complexities in a community that involves so many people of different ethnicities? Did we experience racism or did we just have an encounter with ignorant people? Am I racist for calling this African-American couple ignorant? Would I have been so bold to share my anger and articulate my frustrations to the officers if they were white?

How much does race play into this encounter in the parking lot?

Iris de Leon-Hartshorn, the director of Transformative Peacemaking for Mennonite Church USA commented that we cannot ignore the dynamics of internalized racism. People of color perpetually hear the same messages about themselves and other groups. They then internalize these massages and act out of them. She also pointed out that people of color may be bicultural – possessing a combination of two cultures – but they are not necessarily always intercultural – having the ability to intentionally engage in different cultures to build mutually respectful relationships. I think this is a crucial skill that we who are bicultural need to hone. We need to be interculturally competent.

One of the proactive actions people in communities can take is to address the need for more intercultural competency training, not diversity training, for our police departments. But we shouldn’t stop there. We need this in our schools, our workplaces, our churches and our communities. I can pursue this. I’ll start with the police. This I can do. This I will do.