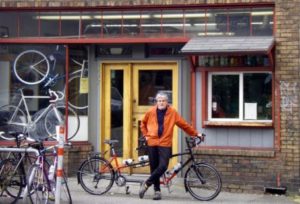 Larry Hauder is a member of Mennonite Church USA Executive Board. This post originally appeared on TheMennonite.org as part of its Seven Questions series. Seven question interviews are compiled by Hannah Heinzekehr.

1. What’s your earliest memory of church?

Sitting in a country church in the high plains of a Nebraska panhandle. My father was on one side of the aisle and my mother was on the other side. I was sitting with my mother and wanted to go sit with my father, so I’d switch places and go sit with him. They would be entertaining me with their various tricks while keeping an eye on a pastor. My dad would break off pieces of licorice and my mom would make a mouse run up her sleeve made out of a hankie.

That particular church was in Chappell, Nebraska. It no longer exists. When I was 10 or 11, my family was part of a church start in Julesburg, Colorado, Julesburg Mennonite Church. It’s part of the Central Plains Mennonite Conference. In fact, The Mennonite did an article on the pastor there not too long ago: Art Roth was the longest serving Mennonite pastor in the country at the time. He just retired recently.

2. When did you first realize that you were called to be a pastor?

If you’d read my book, the title of which is Called to be a Pastor, you’d know all this! I was a school teacher in New Mexico for five years. It was out of being a public high school teacher that I had the first inkling that maybe God had another plan for my life. It was out of that teaching experience that we moved to Elkhart, Indiana, to go to seminary. I went through AMBS [now Anabaptist Mennonite Biblical Seminary] still not 100 percent sure I wanted to be a pastor. In fact, it was only when I became a pastor at Hyde Park Mennonite in Boise, Idaho, that that call solidified. The point of my book is that the call evolved over the next 15 years I was there, further refining and defining it.

3. In your own words, how would you say that Mennonite churches west of the Mississippi are different than churches in the east? Are they?

I’ve not had lots of experience with congregations east of the Mississippi. In fact most of my experience is west of the Rockies. You have to remember that in the conference that I was conference minster of for 14 years, we integrated before the denomination did. The old denominational lines are much more blurry. It is an indication that the priorities may be different.

The [Mennonite] churches in the far west are more isolated from one another and there’s more of a dependence on each other. Conferences and gathering together seem to be more important because we belong to the same community of faith. You still have the same dynamics that exist across the country — the similarities of rural and urban and traditional and liberal splits that define all of our church right now. But those challenges have not become as much of a divisive type of issue for us in the west as it has in other places.

4. What would you want people to know about your congregation, Hyde Park?

Hyde Park is one of the few, if not only, faith communities in a city of 200,000 people [Boise, Idaho] where you can still hear a gospel of peace and reconciliation — where peace is a central part of Jesus’ message and a central part of the kingdom of God. I say that with some assurance.

The church is 35 years old. I was the first pastor. It has maintained an orientation towards a peace and Jesus-centered gospel that is unique. It continues to be a church that grows and thrives with that message.

If I had to lament one thing in our denomination, it would be that that message has become less prominent. I think it’s what makes us unique and it’s our contribution to the larger Christian community and it’s often something we hide under a bushel. That makes me sad.

5. What made you feel led to write a book?

Since it’s been published, I’ve had three classroom professors use it as an exploratory text for ministry discovery classes. And I’ve had the opportunity to discuss Called to be a Pastor with some of the students through phone conversations. It’s been such a joy.

I wanted to better understand how I was called to be a pastor. The more I got into the topic, the more I became aware of how my call was so intertwined with the church. The church can both strengthen and weaken that pastoral call. The two are symbiotic in their relationship to each other — pastor and congregation. I was hoping to encourage new pastors who may be wondering about their call. I want to demythologize any mystery between the pastor and the pastoral call, and I try to lay that pretty bare.

6. What made you say yes to joining the Mennonite Church USA Executive Board?

The decision did not come easily. In fact, the invite came as a surprise. I had left my position as a conference minister and was rediscovering who I was apart from the church when the invitation to join the board came. I wasn’t expecting the call. In fact, I needed to ask myself, is this really what I want to do and how I want to spend time? It was not something that I automatically said yes to.

It’s a position I think I’ve grown into. Orlando will be six years I’ve been on the board. I thought I could add something to the board because of my consulting background, my business background and having been a denominational executive. And now that I’m not linked vocationally to the church and don’t receive my salary there, I thought I could add a perspective that I couldn’t have in earlier years.

Our church has been in crisis for the last four years at a minimum. I can look back with fresh eyes and remember when we were dealing with questions about Pastor Theda Good’s licensing. That was a demarcation moment, and since that event I think we’ve been in a significant and almost continuous crisis. That’s been disheartening.

I’m hoping that when we are finally able to see through the other side of these conversations we are going to be a stronger church, a more inclusive church and a more loving and accepting church. That’s my dream and that’s my hope.

One of my goals has been to show the broad diversity of opinions on our board. I think that’s beautiful and I think the church needs to see this diversity.

8. (Bonus Question!) If you could spend one relaxing day anywhere, where would you want to go and what would you like to do?

I’m an avid bicycle rider, both mountain and road. One of my most joyous trips was my wife and I rented a tandem bicycle on the south island of New Zealand and we simply rode a bike for two weeks. We stayed in hostels along the way. It was one of the most joyous, fun experiences we’ve had. That stands out as memorable.