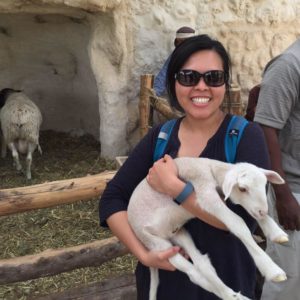 Joyce Kusuma is a member of Mennonite Church USA Executive Board. This post originally appeared on TheMennonite.org as part of its Seven Questions series. Seven question interviews are compiled by Hannah Heinzekehr.

1. Did you have a favorite Bible story as a child? If so, why was that story your favorite?

I liked the story of King David. As a kid, I listened to a lot of Bible stories and I liked a lot of them: Jonah, the story of Esther with Mordecai, and Daniel’s story. But I really liked David a lot because I liked his straight-up humility. He started out as a shepherd and he was small in stature as a kid, but he was chosen by God to be king. It’s amazing to compare him to King Saul. The “king mentality” really got into Saul and he became a different person. In contrast, David, even until the end of his days, stayed humble. He’s just like any of us. He fell into sin, especially with women, but when God told him he needed to repent, he said, “You know what God? Yes, I’ve sinned. Let me make my way back to you.” I really like that.

2. You’ve been a pastor’s kid your whole life. What was that like?

Growing up it can be a little hard. I was in Indonesia for the first 12 years. In Indonesia, it’s a different type of mentality. There’s a lot of expectation. You’re a PK, so you should know the Bible inside out and you should behave like you are the pastor. They watch what you say and what you do.

Here in the United States it’s more relaxed. Kids are kids. If PK’s are being naughty, people are like, “Well fine, they’re kids.” But in Indonesia it’s like, “Oh no, I can’t believe she did that.” Sometimes they talked to us like we were adults and expected an answer like we were the pastor.

My parents first came here to the United States to study. In Indonesia, there was a big riot in 1998. Around that time, I had just finished high school and we were all going to go back to Indonesia. But the riot was a big one. If you Google Indonesian riot of 1998, you’ll find a lot of information.

I’m Chinese Indonesian. If you were Chinese and you were Christian in Indonesia, there was a lot of raping, burning, looting and murder. At that time, my parents decided, for me especially, that they would stay in the States until we saw how things settled down. And then we ended up settling here.

3. You live in the mountains, not too far from Los Angeles. What do you love about the place where you live?

I’ve lived there now for close to six years. I tried to make the move down—I actually moved to the desert, to Palm Springs—for six months. I did not like it and ended up moving back to the mountain.

I also was offered a job two years ago in Los Angeles, but on the way back I realized that it took me two and a half hours to drive home, even without rush hour traffic. I realized that I would rather just go to the mountains and do my work there and then come down on the weekend to attend church. In Big Bear, it only takes me 10 minutes to go anywhere: to the market, to work, etc.

The decision to merge didn’t start until the two churches began to share space. We talked about the idea when we first moved into that space, but it wasn’t anything concrete. After that we started by having joint Sunday services. Then after a year, finally we said, let’s talk about this more and then we started having regular meetings where we had once a month meetings for two years. We spent time talking about bylaws and things like that.

It’s been a learning process for both congregations, because our congregation was an Indonesian immigrant congregation and First Mennonite Church was more non-immigrant. It was established in some ways. It’s been a process, but it’s very enriching and rewarding and I think it adds a lot of spice to the pot.

One thing that we acquired as a habit now is sharing a meal after Sunday morning service. For the Indonesian congregation, this time is very important. As immigrants, we all have to work hard and we don’t have much free time. Sunday is a time when we can sit down together, share a meal and share our stories with our church friends who are like our extended family. So, we always share a meal after Sunday morning service, and lately, we even had more homeless visitors who have come and joined our service and fellowship time (apart from our feeding of the community ministry that we have every other week on Thursdays).

Yes, I do. Actually, I have two stories. I have a classmate from Lancaster,Pennsylvania, but she moved away from church. She says she was a Mennonite and was part of a very strict congregation. She had to wear a head covering. She moved away from home as soon as she was able.

When she found out that I was a Mennonite, she said, “No way. You do not look like a Mennonite!” She hasn’t been to church for 20-some years. I told her she should come and check us out in Upland. She and I hang out and we would sit and do research together, so I invited her to church. She hasn’t come yet. I told her that she didn’t understand that Mennonites are very diverse. If you look at a picture of a Mennonite, it’s not a standard Caucasian person with a head covering. I told her that I am a fourth-generation Mennonite from Indonesia, but she doesn’t believe that there are other Mennonites outside of the USA.

My second story was with a patient of mine. He found out that I was a Mennonite. He’s from Texas and has a country twang and he often talks about his guns. When he found out I was a Mennonite, he said, “Oh, like those who ride buggies?!” I said, “No, not really! But those Amish are our siblings.” I talked with him about pacifism and peace and things like that. It was a good opening conversation. He still likes his Baptist faith and his faith in guns. And that’s not the only time I’ve gotten that question about buggies though. People have asked me if I watch the Amish Mafia show.

6. Why did you say yes to the invitation to join the Executive Board? What are your hopes for the upcoming gathering in Orlando?

When they first asked, in early 2014 or late 2013, I actually politely declined, because I was still in the middle of finishing my degree. But then after that, my constituent group pastors (from the Indonesian Mennonite Association) called me and they said, “Joyce, we need you. We need our voice to be heard.”

That’s the way they put it, so I said, “Let me think about this and pray about it.” I also realized that the term would start after the 2015 convention, about the time I was wrapping up my doctoral studies. So, finally I said, “OK. I will represent us.” And the timing worked out great.

I said yes because I want to make sure there are different representations from across the wider church on the board and I wanted to be present.

In Orlando, I’m looking forward to having a good process. I was not at the convention in Kansas City, but I participated in other conventions and the group processing can feel a little like you’re in a supermarket. It can be very hectic and there can be a lot of information coming at you at once and things are not always clear. I have hopes for ways the process can be improved. Now that those two resolutions [the Forbearance and Membership Guidelines resolutions] have passed, it will be interesting just to see how people interact with each other.

7. What is your go to Scripture passage?

Isaiah 40:31. “But those who wait for the Lord shall renew their strength, they shall mount up with wings like eagles, they shall run and not be weary, they shall walk and not faint.”

But to understand why I love this verse, you have to read verses 28-30 first, and then get to 31.

With all the craziness and the busyness of life, it’s easy to just be tired of waking up on Sunday or maybe tired of being in the world because there’s a lot of politics or maybe you are just tired of doing things that don’t feel like they are for you, but they are for God and his ministry. This verse just reminds me to stay steadfast and that my strength is not my own. Everything I do is for God and I can trust Him to give me the strength to do that work.