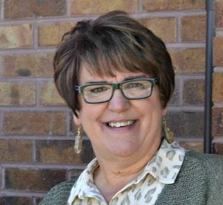 Rhoda Miller Blough lives in Denver, Colorado where she works as a Stewardship Consultant for Everence and is a member of Glennon Heights Mennonite Church. She is mom to two fierce daughters and grammy to two feisty grandsons who live right around the corner from her house. One of her passions is to help educate women about money and finances. In her spare time, she enjoys traveling, reading, conversation and coffee with friends.

The Advent season with its wonder and mystery is here and instead of my usual feelings of expectation and hope, this year I am finding myself crying out in lament.

Lament in a world full of injustice and pain. My heart cries out to God as I learn of mass shootings, policy changes that affect the poor and marginalized and immigrants being turned away from borders. My soul cries out “How long? How long?”

I read the familiar passages about the coming of the baby Jesus and how Mary and Joseph left Nazareth to go to the town of Bethlehem because they were required to be enrolled in the tax lists decreed by Caesar Augustus. While they were traveling, it became apparent that Mary was to give birth that night. Since there was no room in the inn, Mary gave birth to Jesus in a dirty stable with a manager filled with hay for his bed. This story has different meanings for me this year. It is no longer the sterile story of a cooing white Jesus laying in a bed of hay with Mary and Joseph hovering by him. I see now a brown-skinned Mary and Joseph both frightened as they anticipate an uncertain future.

When immigrants live in your land with you, you must not cheat them. Any immigrant who lives with you must be treated as if they were one of your citizens. You must love them as yourself, because you were immigrants in the land of Egypt; I am the Lord your God.

Last fall, I was preparing for an Everence presentation and one of the scripture references I was using was Leviticus 19. I did a bit of research to find out the context of these verses. In this passage, God speaks to the Children of Israel through Moses explaining what it means to be holy as God is holy. Evidence of holiness is seen in how we treat those close to us (our mother and father in verse 3) and the vulnerable in our midst (the poor and the immigrants in verse 33). I was struck by these verses in relation to what was playing out in my own world mostly in the political arena of our country.

So how was I going to respond? What are concrete ways I could treat the poor and the immigrants among us?

I would like to share three stories of how God brought the strangers in our midst into my life.

This past spring I put a  welcome sign in front of my house with the words, “No matter where you are from, we’re glad you’re our neighbor,” in three languages — Arabic, Spanish and English. A couple of weeks later when I was walking to my mailbox, and I met a young woman with her two small children walking towards me. We began talking, and she told me she has lived here now for four years and came from Afghanistan to be with her husband. I told her about my grandsons, and we exchanged names and phone numbers agreeing maybe we could get together. She read the sign and smiled. We made plans to meet the next week.

We went to the park with my daughter Bethany and grandson, Shane. While the children played, she told us the story about her family in Afghanistan and how she is hoping to get her papers so she can stay here permanently. While I pushed her daughter on the swing, she and Bethany talked. Before leaving, we made plans again to get together. As I was saying good-bye to her and the children, she looked at me with a big smile on her face and said, “Now, I have an American friend!” It was a moment I will remember for a long time. All it took to build a bridge of connection were words of welcome on a sign.

My second story took place at San Antonio Mennonite Church. I was in San Antonio for a trip with my Everence colleagues, and we visited San Antonio Mennonite to hear their stories and learn about their congregation. Pastor John Garland shared how in early December 2016, the congregation hosted women and children from detention centers located close by who had been taken by bus to the Greyhound station in San Antonio. They were being dropped off at the bus station with nothing — no money, food out in the cold. San Antonio Mennonite was alerted about this crisis and began the process of opening their church facility. In the course of one week, San Antonio Mennonite hosted more than 500 women and children mostly from Latin America. John shared how one night after having been at the church almost 24/7, he was feeling beyond exhausted, mentally and physically drained and wondered how he could continue this pace when, amidst the clanging of ankle bracelets and coughing, he heard the beautiful sounds of a lullaby being sung by a young mother to her crying baby. John shared how this suddenly changed everything for him — a beacon of light in the midst of such darkness and pain. Listening to John share this story with us made me realize once again the importance of opening our hearts and lives to those displaced and marginalized among us, including the immigrants in our country who are fleeing because of violence and unrest in their own countries.

I was volunteering at Casa de Paz one evening when two young people came to the Casa having been released from detention just that day. The young woman, who looked to be in her late teens/early twenties, from Thailand looked frightened and so alone, immersed in her own thoughts and, because she did not speak English, she was very quiet. Sarah was able to communicate enough to call her family who lived in New York. Her family members were able to procure a flight for the young woman early the next morning.

I did not see her again, because she went to the bedroom and stayed there the rest of the evening. I have thought of her often since that night and have wondered what it must have been like for her to be in detention far away from her family. I wondered how a young woman locked up in a detention center with no way of communicating could possibly have endured the loneliness and pain of being detained.

During Advent, we are singing the song, Canticle of the Turning (My Soul Cries Out With A Joyful Shout) which is a paraphrase of Luke 1: 46-58 (The Magnificat). As I sing this song during Advent this year, I hear my question, “How long?” being addressed.

Each of us has a part to play and my challenge today is that regardless of how small we may feel, God’s mercy will last and God’s justice will continue to burn as the dawn draws near because, “the world is about to turn.”

In the midst of the injustices in the world, we are commanded to love the “immigrant in our land,” and each of us are called to do our part in providing mercy and love. Will you join me?  May it be so.

My heart shall sing of the day you bring.
Let the fires of your justice burn.
Wipe away all tears,
For the dawn draws near,
And the world is about to turn.

Though I am small, my God, my all,
you work great things in me.
And your mercy will last from the depths of the past
to the end of the age to be.
Your very name puts the proud to shame,
and those who would for you yearn,
You will show your might, put the strong to flight,
for the world is about to turn.

Though the nations rage from age to age,
we remember who holds us fast:
God’s mercy must deliver us
from the conqueror’s crushing grasp.
This saving word that our forbears heard
is the promise that holds us bound,
‘Til the spear and rod be crushed by God,
who is turning the world around.