This post was originally published in Goshen College’s Advent Devotionals. Goshen College students and employees are reflecting on the theme: “What are you waiting for?” from Mennonite Church USA and Mennonite Church Canada worship resources. Daily online devotionals are available during Advent 2019 at www.goshen.edu/devotions, or you can subscribe to receive them as a daily email. 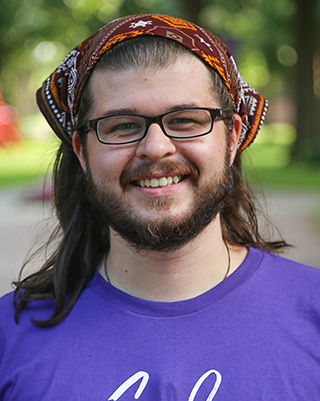 By Stephen Lowe, a junior music and secondary education major at Goshen College from Dayton, Virginia

I am someone who is uncomfortable with fire and brimstone. When I think of fiery sermons on salvation and damnation, I honestly get a little sick to my stomach. At first glance, however, John’s admonition of the Pharisees and Sadducees has a lot more in common with the hellfire preacher than many of the long-winded and meticulously wordsmithed sermons of my Mennonite upbringing. I have always admired the zeal of the prophets. Their ability to speak truth to power, as well as their general foolishness for God, has been something I have sought to emulate in my own life. Yet if I have this admiration for the prophets’ calls to repentance and justice, why is it then that I am so uncomfortable with John’s speech?

When the Pharisees and Sadducees come to see John, you can hear the sarcasm and vitriol in his voice. “You brood of vipers!” he spits. “Who warned you to flee from the wrath to come?” John’s preaching has brought so much attention to him that the highly religious establishment has decided he is worth listening to, and it angered him. I think John sees through the Pharisees and Sadducees. He sees that maybe they only showed up to be seen, to see what all of the racket that this wildman is making is all about. They are not here to listen to his message, but while he has them here he’s going to let them have it. John calls them out on their hypocrisy. He tells them that the Messiah is coming and just because they are the children of Abraham doesn’t mean they are saved from the wrath. He says that unless they change their ways and bear good fruit they will be consumed by the wrath to come. To answer my earlier question, maybe the reason I’m uncomfortable with John’s speech is that fact that maybe I’m a Pharisee or Sadducee.

I’ll admit that I have often found myself grumbling at church politics. Often times they seem to be more focused on the minutiae of church functioning and theology than on the lives of the people affected by our actions. I have fallen victim to saying “I am a Christian and that’s enough,” without considering if my actions speak true to my beliefs. I have often forgotten to bear good fruit, and I think so has our church.

In the midst of our divisive culture, we have become more concerned with ourselves and our situation than with those who are marginalized, victimized and dehumanized by our world. We have become the religious establishment that has deafened ourselves to the “voices of the wilderness,” and I think John speaks to us.

John calls us to repentance. To actively think about our actions and whether they cause pain, division and brokenness, or whether they bring hope, healing and restoration. My hope is that this advent season we may do as John asks, and “Repent for the Kingdom of heaven has come near.” Because the Messiah that John proclaims is near is coming, and the mercy, grace, love and justice he offers us is open to all, all we need to do is repent.

In those days John the Baptist appeared in the wilderness of Judea, proclaiming, “Repent, for the kingdom of heaven has come near.” This is the one of whom the prophet Isaiah spoke when he said, “The voice of one crying out in the wilderness: ‘Prepare the way of the Lord, make his paths straight.’” Now John wore clothing of camel’s hair with a leather belt around his waist, and his food was locusts and wild honey. Then the people of Jerusalem and all Judea were going out to him, and all the region along the Jordan, and they were baptized by him in the river Jordan, confessing their sins.

But when he saw many Pharisees and Sadducees coming for baptism, he said to them, “You brood of vipers! Who warned you to flee from the wrath to come? Bear fruit worthy of repentance. Do not presume to say to yourselves, ‘We have Abraham as our ancestor’; for I tell you, God is able from these stones to raise up children to Abraham. Even now the ax is lying at the root of the trees; every tree therefore that does not bear good fruit is cut down and thrown into the fire. “I baptize you with water for repentance, but one who is more powerful than I is coming after me; I am not worthy to carry his sandals. He will baptize you with the Holy Spirit and fire. His winnowing fork is in his hand, and he will clear his threshing floor and will gather his wheat into the granary; but the chaff he will burn with unquenchable fire.”