Beyond that ocean is North America 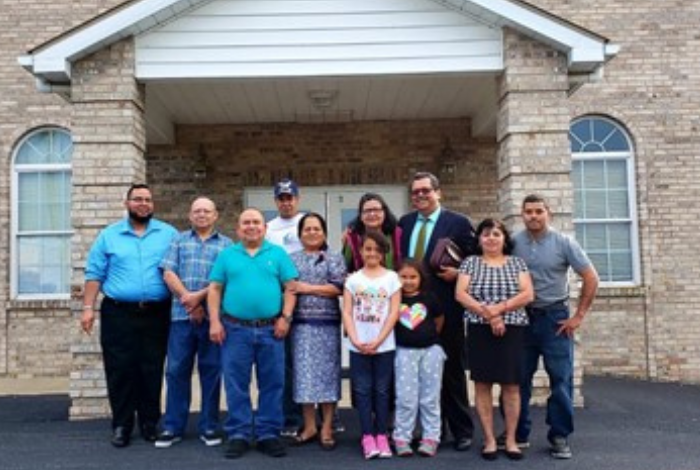 By Adriana Celis for MenoTicias

Alfonso Alvarado arrived in the United States of America, with many dreams, while also facing many challenges. Originally from El Salvador, he left behind his family and culture to begin an adventure that would lead him to be a pastor and, later, a church planter — a task that is not at all easy, especially when the wind blows fiercely onto a vast ocean.

One day I will leave El Salvador and stop eating beans

In his younger years, Alvarado eagerly dreamed of traveling to the United States. The beloved North America that he glimpsed from far away in his college geography books, when he was studying for a bachelor’s degree, was, at the same time, so close in his dreams while he slept. Passionately, he longed to leave El Salvador, perhaps due to the lack of opportunities left in the aftermath of violence and war. That is why he constantly repeated: One day I will leave El Salvador and stop eating beans. He told his story between laughs and tears in his residence in Harrisonburg, Virginia, where he lives with his wife and two daughters, 20 years after having fulfilled his dream of stepping onto North American soil.

During his interview for MenoTicias, the following questions came up: “Do you miss the beans from your hometown? What do gringo[1] hamburgers have that the local food from your hometown does not have? How can you not feel sentimental after leaving your native country and arriving in a different nation?

Amid laughter he told us, “Of course I miss the beans from my hometown. These are the words that I said, but I wouldn’t know the weight that they held until years later. When I arrived in the United States, I felt, as they say in my hometown, as ‘pollito comprado’ (roughly translated, newest chick in the henhouse). It was incredible; this was something that I deeply longed for, but once here, my perspective changed, and it is because of the fear and shame of feeling inferior in a country with huge buildings, imposing companies and large highways. Not having friends is an enormous challenge, since human beings were born to be a part of a community. Some say that days past were better, and I felt that, especially in those moments when I had a deep longing to eat my native food again. How I missed those good dishes that were prepared with so much love. These are some of the thoughts that I had when I came to this land.”

Alvarado comments, “The issue of racism also digs deep – not only from having a different skin color but also from not speaking the same language, not sharing the same culture, and not doing things in the exact way it is done in this country – and it runs without rest.”

Employee in a turkey processing factory

As time passed after he arrived in the United States, Alvarado followed a very different path from the dreams of his youth. At first, he had to work as an employee for a turkey processing factory, as well as in other physically demanding jobs, and it is in those moments that the American dream felt very unattainable and distant to him. He said there were many challenges that living here brought, but for each challenge, God helped and strengthened him day after day. Since life is like being in an ocean where there will always be strong waves and great winds and without escape, he said it was like having multiple lives.

The door was opened with the Mennonite church

With strength and courage, Alvarado continued to work with enthusiasm and with faith in God; that’s how, later, a door was opened for him to work as a pastor and church planter at a Mennonite church that had seen potential in him. “Being a church planter is not the same as being a pastor,” Alvarado said. “You need to be quite determined, since it is about putting faith into action. Often it seems easy, but there are difficult moments due to all of the challenges that show up on this road.”

“Being a planter,” said Alvarado, “is like starting a journey. When beginning a new church-planting project, the planter starts from scratch. And the planter’s dependence is directly on God, and they trust that God will open paths where there are none, as when the Creator made the universe — the constellations and planets, including the Earth — out of nothing. God has the power and the magnificence to enact a new work.”

Alvarado shared a part of his history as a planter and how he has seen providence throughout this journey. Providence, he said, is the sovereignty and power of God to provide for every need, in the most unique way.

His work as a pastor and church planter has been a long journey, full of very valuable moments when listening to the correct voice — the voice of God — has been key to staying firm and focused, because as is well known, working as a planter is not a path without thorns. Often it is painful and tiring, according to Alvarado, but when you learn to listen to the voice of God, the path becomes bearable.

The joy of God certainly strengthens those called to carry out the Creator’s work, said Alvarado. For this reason, in his walk as a planter, he has experienced moments where he has had to make the decision to put his faith into action, having the certainty that — for God — there is nothing impossible.

Alvarado affirms that when you love people who come to church, and you work hard on visitations, fellowship and showing God’s compassion for them, something wonderful happens, because the word that is sent never returns empty. Isaiah 55:11 Thus, for example, the church that he pastors is the result of the wonderful work that God is doing in each one of the people who arrive there to give glory and honor to the name of God.

[1] “Gringo” is a term that Latin American people often use to refer to North Americans and especially those from the U.S. This term is used interchangeably with the word “American” and should not be taken as offensive. It is intended to have humorous effect.