(Mennonite Church USA/Mennonite Mission Network/Mennonite Education Agency) — Nearly 70 pastors, leaders, directors, coordinators, educators, change-makers and others with connections to Mennonite Church USA (MC USA) met together Feb. 8-11 at the Hyatt Regency Riverwalk Hotel in San Antonio, Texas, for the seventh annual Hope for the Future (HFF). HFF brings together leaders of color from across MC USA to explore the ways that power, privilege and racism function in our denomination. 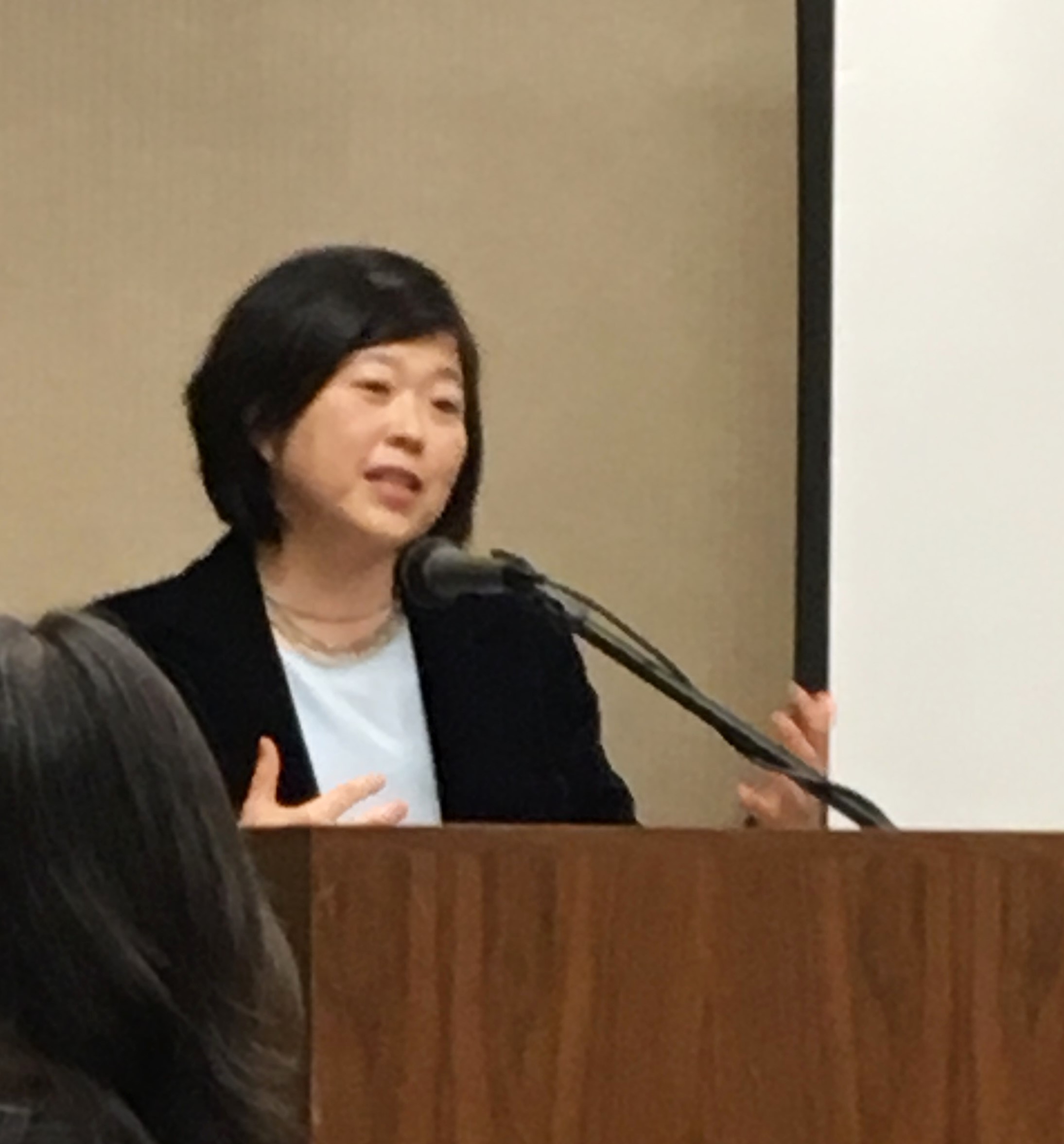 The gathering was framed by the words of Dr. Vincent Harding in an address to Mennonite World Conference in 1967. Harding, a former Mennonite, said, “Rise you saints. Get out of your homes, out of your groups out of your churches … Get out of conformity to the world and out of the fearful, noisy night. You have nothing to lose but your life to win the world. Rise you saints, spring forth and start marching. The Master is already on his way saying, ‘I am the way, follow me.’”

In this spirit, participants at HFF were invited to imagine together what is possible for MC USA in this moment in history. According to Iris de León-Hartshorn, director of Transformative Peacemaking and member of the HFF planning team, the struggle for justice and peace within MC USA and the world has faced setbacks recently as divisiveness, suspicion and targeting have become the norm.

A call to dream and action

Through their varied vantage points, the speakers explained the work of people of color within MC USA as they explored scripture, research, poetry, history, sociology and more.

Park Hur challenged the group to imagine and name what we can create together, instead of focusing time and energy on what we are against. She dared participants to become courageous conspirators like the Egyptian midwives who defied Pharaoh in Exodus 1.

“The exodus from slavery to liberation began with these women,” Park Hur said.

Guyton spoke to the manner in which we must work to effectively change unjust systems, based in Jeremiah 22:1-3. 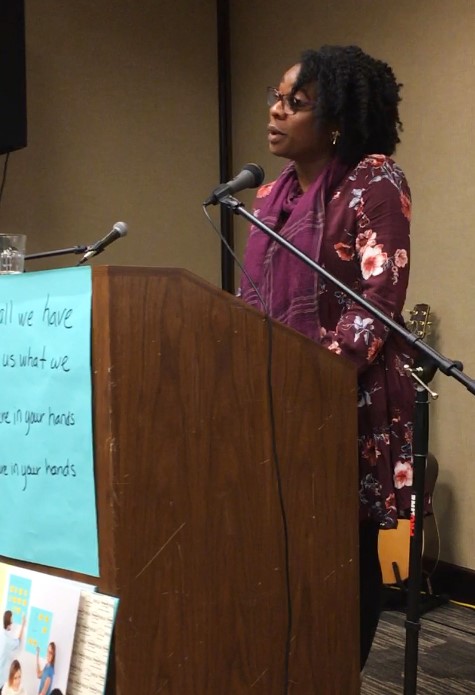 Chantelle Todman Moore speaks at Hope for the Future. Photo by Jenny Castro.

“In order to bring change to a system, you must examine it from the bottom up,” he said. According to Guyton, when speaking truth to power, we must listen to God and make sure we speak clearly so that we’re heard. We must do what is right, even when — and especially when — it is costly.

Dr. Juan Martinez began with an adage: La esperanza es la última que muere (Hope is the last to die). He challenged participants to “look for hope in the right places,” to let go of the models of Western Christianity and look to margins.

“What can we learn about being Christians from those in the Global South?” Martinez asked.

As the conference concluded, Chantelle Todman Moore addressed disagreements faced by the group and challenged them to be beloved community together.

“I saw us struggling [this weekend] to figure out what it means to belong to each other as church,” she said. “I wonder if in our quest to live out the Gospel we know each other’s names and each other’s stories.”

Todman Moore invited participants to truly see one another beyond the labels of marginalization that are often used among us, to see one another’s humanity.

The conference room erupted in shouts, clapping, and cheering on Friday morning, after MC USA issued a press release announcing the decision to name Guyton executive director of MC USA, effective May 1. Guyton will be the first African American to serve MC USA in this role.

“Who’s got the oil?” one participant asked aloud as the entire group circled around Guyton in prayer.

“The timing and location were pretty amazing,” said Guyton. “It was wonderful to be surrounded by friends and leaders from across MC USA, to feel the love and be touched by the prayers of people that I have gotten to know over the course of 25 years within the denomination.” 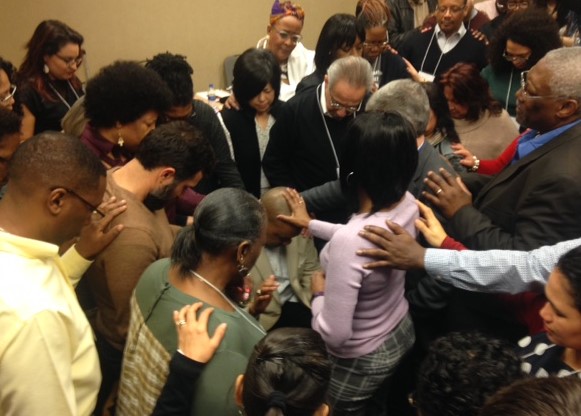 On Friday, participants were encouraged to bring topics that they hoped to explore together with the group, and then formed affinity groups around those topics.

Marisa Smucker, church relations associate for Mennonite Mission Network, participated in a group that explored cultural interactions and language among people of color. The group discussed the challenges of participating in a gathering like this for people whose primary language is not English – what gets lost as well as insight that isn’t shared.

“One thing that stood out to me was the recognition of who wasn’t there and what we might be missing in their absence,” said Smucker. “This felt significant because each of our experiences here in the U.S. is very different and the cultures we come from continue to be a part of us. How would the gathering have been different if more Asians and Native Americans would have been in the room? What about our African brothers and sisters — Congolese, Kenyan, Ethiopian, and others?”

On Saturday, table groups were invited to dialogue together and form a prophetic word for MC USA on behalf of the people of color gathered at HFF 2018. After about an hour of conversation, each table presented their words to the larger group. A group of writers were then invited to pull out themes that arose to compose the letter.

The writing team presented a draft of the prophetic letter to the group on Saturday afternoon and invited participants to offer feedback. The letter called MC USA to recognize the diversity that exists and embrace it as a gift. The first draft of the letter named various identities that exist within the group gathered at HFF and MC USA at large, including LGBTQ as one of the named identities. Feedback became tense as some people expressed concern about the celebration and full inclusion of LGBTQ people in the life of the church. The writing team reiterated that their work reflected what had been named around tables, and committed to revising the letter based on participant feedback.

According to de León-Hartshorn the expectation wasn’t necessarily that the group would speak with “one voice,” but instead that the group could speak to the church and each other with deep love and respect.

“I think the difficult moments reminded us of our diversity — culturally, theologically, etc.” said Smucker. “Initially this may seem like a disadvantage in the sense that we are lumped together as people of color when there are so many differences that are beyond the color of our skin. But we recognize that the problem of racism in the U.S. affects us all. In the coming together out of solidarity and necessity, we will find strength if we work at doing this together.”

“Our struggle together is important work,” added Martin Navarro, stewardship consultant and financial representative for Everence. “We cannot pinpoint a one-size-fits-all identity statement to describe us. That’s the beauty of this group. We have the chance to be a model of what the larger Mennonite church needs — being diverse and okay with different perspectives. We do not need to agree on issues, but we should be able to empower each other to go forward in this work.”

Stanley Green, executive director of Mennonite Mission Network and member of the HFF planning team addressed the group on Sunday. According to Green, the pain and struggle of Saturday afternoon was difficult, but not surprising.

“The test will be how we will move forward from here,” Green said.

The revised version of the prophetic letter will be sent to HFF participants for approval, and then the group plans to release it to MC USA at large. 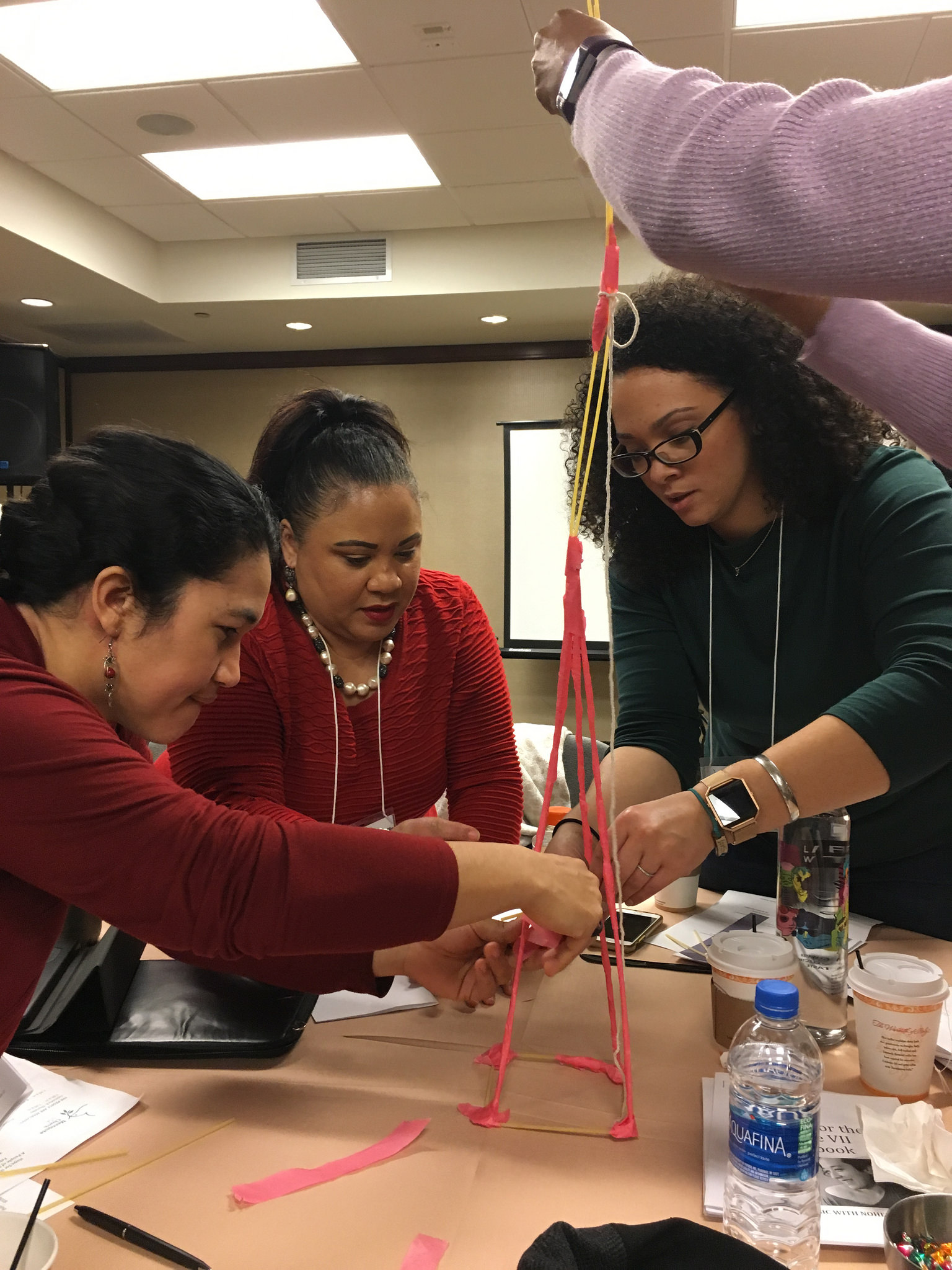 HFF participants work together on a team-building activity. Photo by Jenny Castro

Looking back and looking ahead

On Sunday morning, Carlos Romero, executive director of Mennonite Education Agency and member of the HFF planning team led a time of reflection on the history of HFF, beginning with the first gathering in Tampa, Florida in 2011. According to Romero, sometimes it is helpful to look back in order to figure out a way forward. He reviewed survey results from a HFF survey taken in September which indicated that the majority of past and current HFF participants believe the gathering should be about building capacity among people of color and growing alliances across cultural, ethnic and generational lines for mutual empowerment.

Hope for an unclear future

A cold front blew through San Antonio on Saturday night, and so participants bundled up as they headed for the airport Sunday afternoon and Monday morning. Many left challenged and energized, many were left with lingering questions, some left disappointed.

“I’m thinking that we are at a place of ambiguity,” said Navarro. “For some this is difficult, but I believe this is where we need to be to grow. We came into this conference not knowing what to expect and we did not leave with clear answers. We need to embrace our uncertain future and focus on the now.”

“For the most part, I felt people of color want to stay together no matter our differences,” said de León-Hartshorn. “I realize our theological viewpoints on LGTBQ inclusion are at different places, but if we can continue to move toward a deep love for each other as sisters and brothers in Christ, that in itself can help us move to being church together.”