Carlos Romero talks about extending the table in Mennonite education

By Javier Márquez for MenoTicias 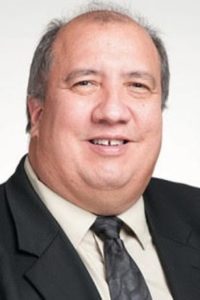 Carlos Romero is the former executive director of the Mennonite Education Agency (MEA), an agency of Mennonite Church USA. Romero served as executive director since the formation of MEA in 2002. When you mention him to people who know him, they have good things to say. For example, Steve Kriss, the executive minister of Mosaic Mennonite Conference, said that Carlos “has provided a lot of blessings for our church.” Violeta Ajquejay, a member of the editorial team for MenoTicias, told us that “he is a leader who inspires confidence from the first moment, someone who has done a lot in the fight against racism.”

MenoTicias interviewed Romero about his work in Anabaptist education, his struggles against racism, and his vocation, which has allowed him to give a voice to those who did not have one in the past.

MenoTicias: We know you are passionate about Mennonite education. Where does this passion come from?

Carlos Romero: “I was born in San Juan, Puerto Rico, into a Catholic family. But, when I was 12 years old, my parents sent me to the Mennonite school in the city because they wanted me to have a bilingual education. When I discovered Anabaptism, everything in my life changed. Knowing how Anabaptist education changes people’s lives — not only in their faith, but also in their professional development — explains my passion better than anything. Latinos in the United States know that a good education opens doors. Another thing is that the church plays an important role in education as a spiritual source. For these reasons, I have dedicated myself to helping others change their lives, just as education helped me at the time.”

MenoTicias: Part of your historic contribution to MEA is that you expanded the vision from “schools for Mennonites” to “Mennonite schools for all.” When we look at today’s world and think about its challenges, such as climate change, the shift in traditional social structures, migratory movements, the resurgence of political extremism and underlying racism, what do you think Anabaptist education is able to contribute in an appropriate and timely way?

Carlos: “I believe that in this world, broken by so many difficult things, Anabaptist education allows us to establish a path forward by presenting us with opportunities to know how to respond to injustices, based on how to relate to others. We also appreciate peace and reconciliation, not like a utopia, but this begins with the establishment of the kingdom of God among us. By giving ourselves an ethical foundation, we also acquire the appropriate vocabulary to express ourselves in difficult moments. And it motivates us because all of us can make a difference. Each person in this world is important.”

MenoTicias: How would you describe the role you had as executive director of the MEA?

Carlos: “I would say, first, that I would not change the opportunity I had to work at MEA for anything in the world. They were the best, and at the same time the most difficult, years as a professional. The most complicated thing was that I was not a white person, and they were not used to a Latino being in that type of role. Also, when I entered, the focus of MEA was on the universities and the seminaries. It was important to expand the vision of education, so that it covered everything from basic and primary education institutions to higher education institutions. This also motivated us to bring Mennonite schools from all over the region to the table, such as the Mennonite school in San Juan and the one in Cali, Colombia. We also included informal education, which I felt was a great opportunity. That’s why we expanded the Instituto Bíblico Anabautista (Anabaptist Biblical Institute, IBA) and the Seminario Bíblico Anabautista Hispano (Hispanic Anabaptist Biblical Seminary, SeBAH).

“Part of my efforts were focused on developing, expanding and transforming the system. I also started bringing in new people — Latino and Black people — people who were not included in the past. We formed a multicultural board. It was an achievement but, at the same time, an achievement that encouraged other future achievements. Although, at the time, it generated resistance. Those were difficult years because many Mennonites did not send their children to Mennonite schools. That’s when the idea of ​​‘Mennonite Education for all’ was born. We thought, ‘If Anabaptist education is a gift that God has put us in charge of, then why don’t we share this with everyone, if it’s the Good News?’”

MenoTicias: You dared to form a multicultural team, distributed responsibilities horizontally and tried to give representation to everyone. You also tell us that by doing so, you generated resistance and discomfort in some sectors and in some people. Racism is a real issue, that, to whatever degree, still subsists in various church settings. In what ways did you deal with it in education?

Carlos: “I would love to say that in the church there is no racism, but it’s not true. It’s a church made up of people, and as people, we are not perfect. But to fight racism, there is no single path. It is necessary to tackle it from every side that we can. For my part, I tried to work in various places: first, to expand the board of directors. In the past, if it was a table of five or six people — where there was hardly a person of color, and even then, as if to cover the quota — now the table would hold nine or 10, and not everyone would be white. We would include as many new perspectives as we could. It had to be a changing table.

“Second, understanding that racism is based on the ignorance caused by not knowing other people, I tried to establish relationships between white people and non-white people. It was important for people to know who I was, the Latino director.

“Third, I put into place specific programs that offer the opportunity to access education at all levels for all people.

“Fourth, when a need for personnel arose, we tried to think of minorities who were also people who had been trained and were qualified. So, if we needed an accountant, for example, we tried to bring in a person belonging to a minority group. Also, if there was an opportunity in a leadership position, we put them on the list. That was key — opening doors of leadership to those who did not have access. It was very easy, and it also enabled me to give back what I had received. I had been able to reach my position thanks to the help and trust of others who supported me. I had to do the same for others. In the past, we had thought that those positions did not belong to us, but it is something that had to change.

“Fifth, I conducted seminars and workshops for board members and leaders in institutions on multiculturalism and anti-racism.

“Sixth, and most important, my job was to always be sure that we had the financial resources. Thus, together with Noel Santiago, we started a meeting that we called Hope for the Future, which was a space to motivate people of color, “who are like me,” and who, in turn, needed resources. I remember that we expected 15 to 20 people the first year, but about 100 came. Donations also came from many places.

“Seventh, I had the opportunity to be trained in a program that measured intercultural skills, through an exam called the Intercultural Development Inventory, which is a program that is used in many countries, and I brought it to my workspaces.”

MenoTicias: Carlos concluded the interview with the following reflection:

“If you ask me if we are where I would like us to be, I will clearly tell you, ‘No.’ We still have a lot of work to do, but we have made progress. The work of transformation never really ends. But I have witnessed countless achievements, such as expanding the table for more people. Many people who are part of minority groups have been accepted into leadership positions. We are no longer silent; now, we are part of the dialogue. From the pedagogical perspective, our institutions are in contact with other contexts, and we seek to learn from others’ experiences. Voices that were not heard before now are heard. Of course, I have had frustrations and failures, but at the end of it all, I am grateful.”

Hope for the Future | January 21-23, 2022 | Collective trauma and hope (Biblical text is Esther) | Location to be announced