The EB spent time wrestling with how to present two polity documents to the Delegate Assembly in Kansas City: the updated ministerial polity handbook, A Shared Understanding of Church Leadership; and the Mennonite Church USA Membership Guidelines.

The EB had invited the Constituency Leaders Council (CLC) to give feedback at its October 2014 meeting on what kind of process would be required for adopting the updated ministerial polity handbook. The revised document, developed in cooperation with Mennonite Church Canada, contains a statement taken from the Membership Guidelines about credentialed pastors not being able to perform same-sex unions. It was included in the polity handbook in 2011 in response to a request written by area conference ministers. 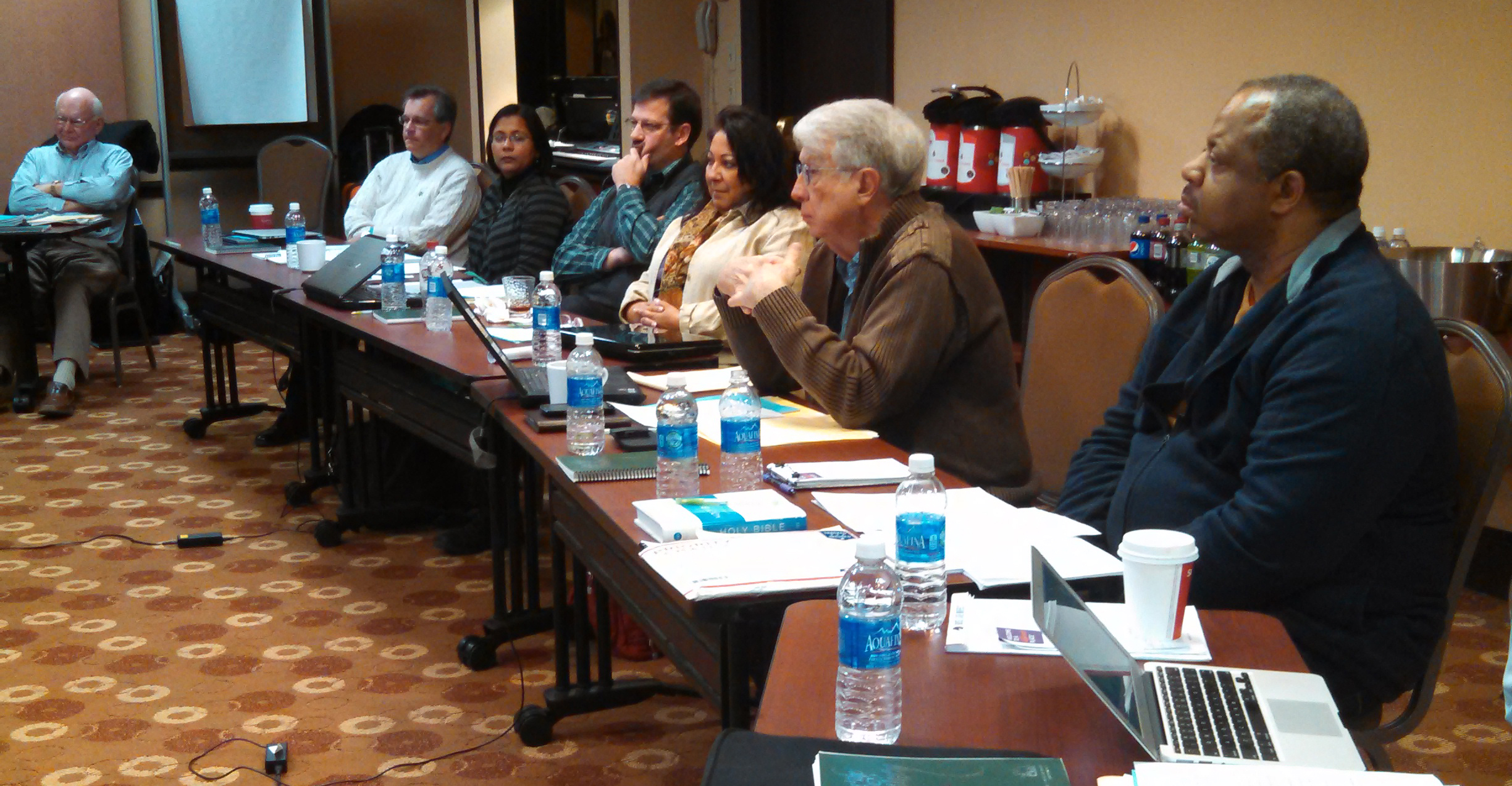 Based on the CLC’s feedback and after extensive discussion, the EB voted on a motion to approve the ministerial polity handbook for implementation, including the section from the Membership Guidelines, and recommend it to delegates for study. Delegates will be invited to review the document and give feedback during the Delegate Assembly this summer and over the course of the next two years, with the understanding that the document could be revised, in consultation with Mennonite Church Canada, by 2017. The motion passed with strong, though not unanimous, support.

The EB also discussed a possible resolution to bring before the Delegate Assembly that would address the ongoing authority of the Membership Guidelines for Mennonite Church USA. At the Phoenix 2013 Delegate Assembly, the EB had shared an administrative update of the guidelines and indicated that the guidelines would come before delegates for further review in 2015.

After much discussion and weighing a number of possibilities, the board recommended that the guidelines remain unchanged and be used as interpreted in the June 2014 action taken by the EB.

In June, the EB had cited the Membership Guidelines as a foundational denominational document that guides the work of Mennonite Church USA and that the EB holds in trust. Based on the guidelines and other foundational documents, the Executive Board noted that Mountain States Mennonite Conference and any other groups who would move to credential persons in same-sex relationships would continue to be found at variance unless the Mennonite Church USA Delegate Assembly changes the stated policy on same-sex relationships. (The full text of the June action is available online.)

This board recommendation will be tested through a survey of registered delegates in February and March and reviewed by EB members at their April meeting.

Resolutions from outside the EB can still be submitted to the Resolutions Committee until March 1, 2015. If affirmed by the committee, resolutions will then be reviewed by the Constituency Leaders Council and the EB in the spring.

In their report, the structure committee members wrote, “In our deliberations, we concluded that there is not a structural change that would resolve the current tensions in Mennonite Church USA. … Our committee recommends that the current Mennonite Church USA structure be maintained. We also recommend that the board clarify, in consultation with the Delegate Assembly, its understanding of how ministerial credentials function in our system, and how the EB understands its leadership function in relationship to area conferences and congregations.”

The board commended the committee members for their extensive work. The EB will use their recommendations, as well as feedback gathered from the August 2014 survey of credentialed ministers and the upcoming delegate survey, to guide future board conversations and preparations for the Delegate Assembly in Kansas City. The full report is available online.

The EB also spent time reviewing proposed questions for a survey that will be sent to all delegates who register in February and March for the Kansas City convention. The survey will include questions about polity; inclusion of people who are lesbian, gay, bisexual, transgender or queer (LGBTQ); and resolutions that the EB is considering bringing before the Delegate Assembly this summer.

During their meetings, the EB also received the resignation of board member Tyler Hartford, pastor of Pleasant View Mennonite Church in Goshen, Ind., due to other commitments, including congregational assignment.

The board also commended a new statement on sexual abuse in the church, written by the discernment group on sexual violence and John Howard Yoder’s abuses of power, for consideration by the Delegate Assembly, and affirmed the appointment of new Mennonite Church USA representatives to the boards of Mennonite Central Committee, Mennonite Disaster Service and MennoMedia.

Board members offered prayers for Mennonite Church USA staff members and spent time in worship through Scripture and song.

The board emphasized the importance of hearing encouraging stories of people following God’s call and seeing lives transformed across Mennonite Church USA. Board members encouraged staff to continue to find ways to highlight things that people across the church have in common and to focus on “Jesus as the center of our faith, community as the center of our lives and reconciliation as the center of our work,” as well as the goals laid out in the Purposeful Plan.