Home / News / From Palestine to Pennsylvania, peacemaking is not passive
Apr 21 2021

From Palestine to Pennsylvania, peacemaking is not passive 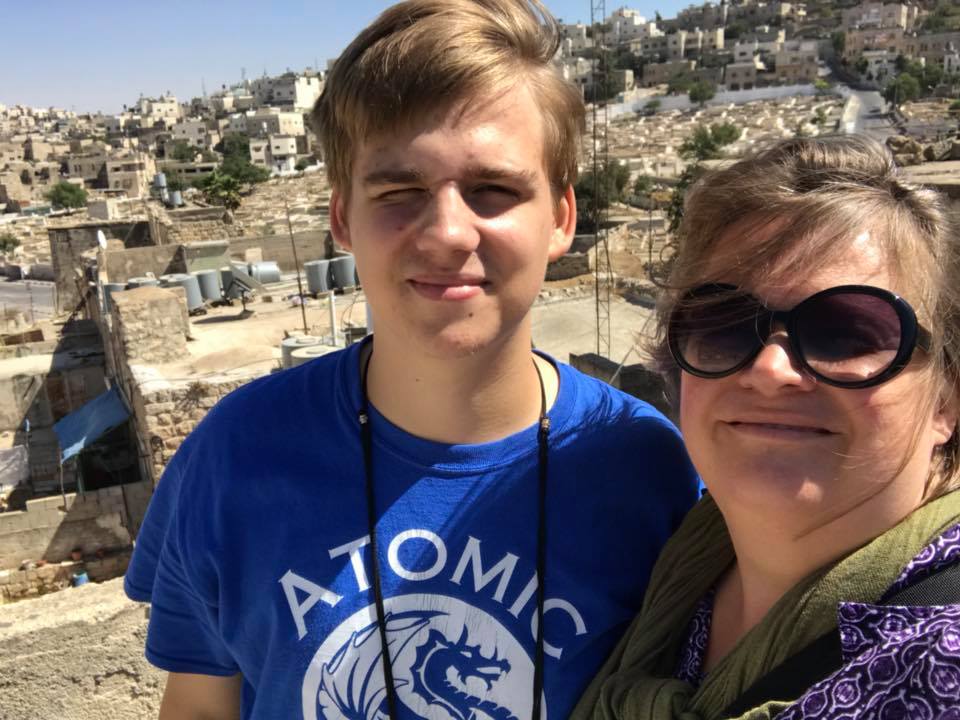 Amy Yoder McGloughlin and son, Will, on the roof of the CPT office in Hebron, West Bank, in 2018. (Photo provided.) 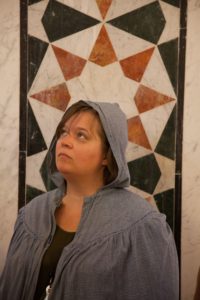 “I hate doing that stuff,” says Amy Yoder McGloughlin, pastor of Frazer (Pennsylvania) Mennonite Church, describing the time she joined protestors to obstruct the entrances of Philadelphia’s City Hall in 2014 during a New Sanctuary movement demonstration. “I grew up in fundamentalism, where you obey authority. If someone tells you to get out of there, you get out of there. And to say ‘no’ went against all my training, but it also felt like a spiritual calling.”

So, how did this reluctant activist get the courage to do this?

“I don’t think of myself as an activist,” Yoder McGloughlin quickly corrects. “I just think, ‘how do I live out the life and works of Jesus wherever I am?’”

The answer has led Yoder McGloughlin to change careers from social worker to pastor, to build powerful interfaith relationships in her community, and to lead a half dozen delegations to Palestine with Christian Peacemaker Teams (CPT).

“For so much of my growing up, Jesus was a symbol of power and, in some ways, was used as a weapon,” she said. “The Anabaptist tradition of talking about Jesus as being in solidarity with us felt like such a different way to understand the call of discipleship. That began my passion for peace.”

After earning a bachelor’s degree in sociology, Yoder McGloughlin served as a social worker in Philadelphia for seven years. “I left because I felt I was bringing more violence to families than I was preventing,” she said, acknowledging the racist underpinnings of the system.

It was when she left her job and enrolled in seminary – with two young children at home – that Yoder McGloughlin made the connection between social justice movements and the gospel.

“To connect these at a visceral, heart level was really important for me,” she said. “That’s when Christian Peacemaker Teams came on my radar, along with the understanding that we can use our bodies, our power and our privilege in ways that intervene in places of violence.”

Founded in the mid-1980s, CPT walks alongside local peacemaking communities to support and amplify the voices of local peacemakers who risk injury and death by waging nonviolent direct action to confront systems of violence and oppression. 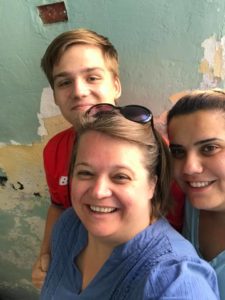 Several years later, while serving as pastor of Germantown (Pennsylvania) Mennonite Church in 2013, Yoder McGloughlin joined four other members of the congregation on her first delegation to Palestine with CPT. She went with the blessing and support of her husband and children, who were 9 and 12.

During the two-week trip, the delegation had the opportunity to talk with Palestinians and to observe the CPT workers in Hebron interrupting violent situations.

“For me, that became a model of what peacemaking looks like,” she said. “Peacemaking is not passive.”

Two years later in 2015, Yoder McGloughlin returned to Palestine with CPT, this time leading an interfaith delegation with a local rabbi. She led four more annual delegations since then and even had the opportunity to take her 78-year-old mother-in-law and son along at different times. In 2019, she joined the steering committee of CPT, representing MC USA. 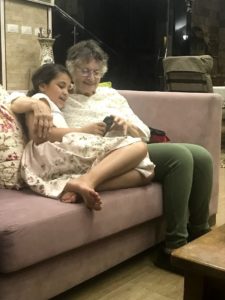 “This is my mother-in-law, Judy McGloughlin (right), visiting with my friends, the Issa family (Sadeen Issa, left), in East Jerusalem,” said Amy Yoder McGloughlin. “They didn’t share a language, but they had a lot of fun together. ” Photo provided.

“I want people to think about what creative peacemaking looks like,” she said, explaining why she continues to return to Palestine. “If we can get a sense through CPT of how Palestinians are creatively resisting the occupation, then perhaps we can transfer some of that knowledge and learning to our own lives.”

Peacemaking in the suburbs

As the new pastor of Frazier Mennonite Church in 2018, Yoder McGloughlin was challenged to apply the peacemaking skills that she honed in urban ministry and militarized zones to her work in the suburbs.

“When I first came to Frazer, a youth in the congregation asked me, ‘What does peacemaking look like in the suburbs?’” she said. “That was a hard question for me because I had so contextualized it to Philadelphia and Palestine. I said, ‘I have no idea.’” She added that the question hit her pretty hard.

“I learned quickly that peacemaking – the way to translate what’s happening with CPT in Palestine to what’s happing in the suburbs – isn’t actually that difficult.”

Despite being stereotypically characterized as more peaceful than racially diverse, urban communities, affluent and predominantly white suburban neighborhoods also struggle with conflict and violence and have a need for peacemaking, as Yoder McGloughlin soon discovered.

A mass shooting at the Tree of Life synagogue in Pittsburgh, Pennsylvania, on October 27, 2018, put Yoder McGloughlin’s peacemaking skills to the test.

“I called the synagogue down the street and said, ‘Our congregation would like to support your congregation in whatever way we can. One thing that we can do is stand outside your building on Friday while you worship together. Can we do that for you?’” She explains that this is a CPT practice – to stand as a protective presence.

The rabbi declined and instead invited the Frazer Mennonite congregation to join them in worship, which they did.

“I quickly realized that the things I’m learning with CPT translate wherever you go,” said Yoder McGloughlin.

“If we seek peace, there are steps we can take and things we can do as followers of Jesus to counter the violence and the militarization of the world we live in.” 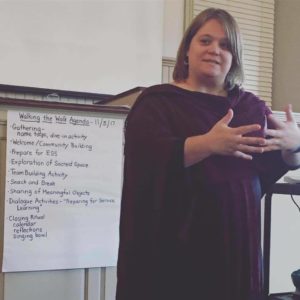 Although COVID-19 prevented Yoder McGloughlin from returning to Palestine in 2020 and possibly 2021, she continues to seek opportunities for peacemaking within her predominantly white congregation.

“This past year after the death of George Floyd, active peacemaking at Frazer Mennonite Church has been about looking at how we see ourselves as white people and how this has been damaging to our neighbors,” she explained. “The journey of understanding our own whiteness has been a way to faithfully follow the life and teachings of Jesus.”

Reflecting on her own journey as a peacemaker, Yoder McGloughlin said, “It’s easy to get overwhelmed with the fact that the world is a mess and broken. I try to just do what I can where am. It didn’t start with me doing a yearly trip to Palestine. That feels huge,” she continued. “It started with small things. It started by just examining, with my family, what does peace mean for us? What is Jesus asking us to do? And taking those small steps.”

This year, 2021, Christian Peacemaker Teams is celebrating its 35th anniversary of peacemaking solidarity, building partnerships, undoing oppression and confronting war. CPT traces its origins to the mid-1980s, when members of the historic peace churches (the two largest North American Mennonite denominations, Church of the Brethren and Friends/Quakers) were seeking new ways to express their faith. MC USA continues to be a sponsoring body of CPT.

Mennonite Church USA is the largest Mennonite denomination in the United States with 16 conferences, approximately 530 congregations and 62,000 members. An Anabaptist Christian denomination, MC USA is part of Mennonite World Conference, a global faith family that includes churches in 58 countries. It has offices in Elkhart, Indiana and Newton, Kansas. https://www.mennoniteusa.org/

Interested in engaging in the peacemaking work of CPT?