This article has been translated from an article first published in Spanish on the MenoTicias page. Read in Spanish here. 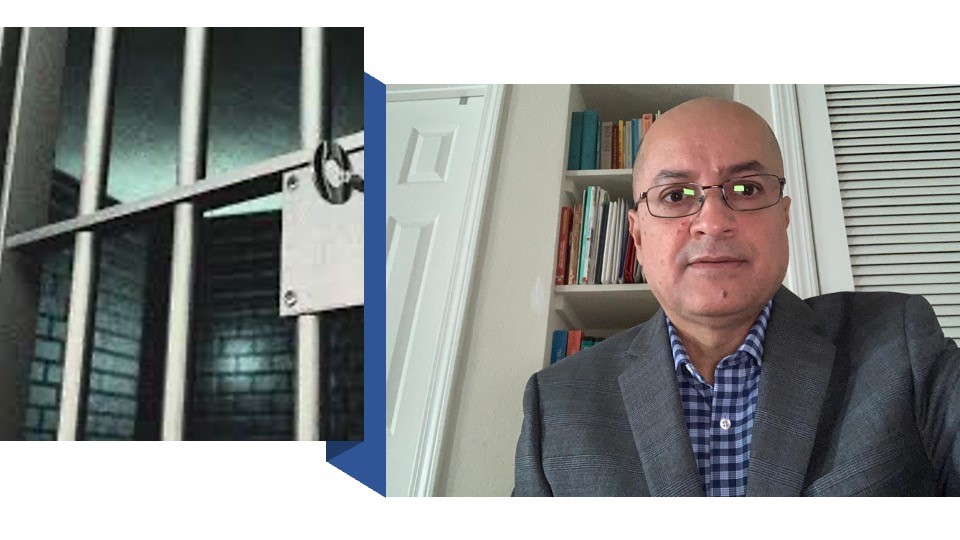 It all started when he was a teenager. Luis Alvarado longed to serve in the pastorate through chaplaincy. Deciding what he wanted to do was not easy. In Alvarado’s case, his decision to become a chaplain has been one of his best life choices. He was aware that chaplaincy was not typical pastoral service, and perhaps, it wasn’t entirely accepted by everyone, but this was his calling.

Alvarado was born in Puerto Rico more than 50 years ago. He is a pastor and chaplain at South Texas Detention Complex, an immigration detention center in Texas. He received his Bachelor of Arts in Social Sciences from the University of Puerto Rico; he has a Master of Divinity from McCormick Theological Seminary in Chicago. He is an ordained pastor for the South Central Conference of Mennonite Church USA. Additionally, he is a chaplain, certified by the American Correctional Chaplains Association.

He is the youngest of nine siblings. He gets up very early, and he likes to start his day with giving gratitude to God, through prayer and biblical meditation. Then, he quickly prepares to go to work at the immigration detention center. He spends long hours on his phone. He never disconnects from reality, not even on vacation. He has a special ability to work as a facilitator, connecting people with his beliefs while they are detained in the immigration center.

Chaplaincy is not typical ministry

Alvarado decided to dedicate himself to chaplaincy and help all people, without exception. But why in an immigration detention center? Alvarado said that he is inspired to work in the detention center by the opportunity to connect people with his religion, regardless of whether or not they profess the Christian faith.

Alvarado said, “I am faithful to my convictions.” Chaplaincy is not typical ministry, even though it finds its support and foundation in the Bible. Its main objective is not to question the faith of others. On the contrary, the objective is to serve society in terms of human needs, both spiritual and physical. Alvarado said, “I am there to create bridges, not to build dividing walls.”

The other people’s stories have made him a better person

A long time ago, while he was in his office doing administrative work, Alvarado was struck by something. There was a new group of immigrants who had been brought to the detention center. They had been captured and detained. The underlying motives and probative arguments for detaining this group was that they had entered the country illegally. This is a situation that is very common, especially when many people leave their home countries and decide to cross the border, regardless of the cost and the consequences.

Alvarado, with his typical respect and professionalism, approached this group of people and greeted them with a kind and friendly voice and offered them his help. He started a conversation with the newcomers. One of them commented on the overwhelming anguish she felt. She was a young, professional woman who had decided to leave her homeland in Latin America to create a new future in the United States. She, tearfully, shared the pain and humiliation she felt coming to a country where she did not speak the language and where she performed unskilled labor that she had not done before.

She remembered how, in her country of origin, she was a professional with a house and a family. Here, she was one more Latina among thousands and thousands who are “undocumented.” Alvarado recalled that the woman would not stop crying, and in the midst of sobs, she said, “Now I can’t believe that I am going to be deported, as if I was a criminal. I never imagined that this would happen to me.”

While Alvarado listened to her, he was surprised by how a person was able to bear so much pain. This reaffirmed, in him, his deep love for the service in which God had placed him, working with these people. In this way, he is able to give them a voice of comfort when no one else can. These are the stories that have given Alvarado a tender heart. It is not about judging the decisions that others have made, because some decisions are easier, others are simply difficult to understand.

According to Alvarado, it is in those moments when we recognize that we must be faithful to the call that God, with infinite love, has given us. True compassion and Christian service go beyond mere words; they are acts of love that are born from risk and are refined in the depths of the soul. Love, then, should be the natural result of compassion.