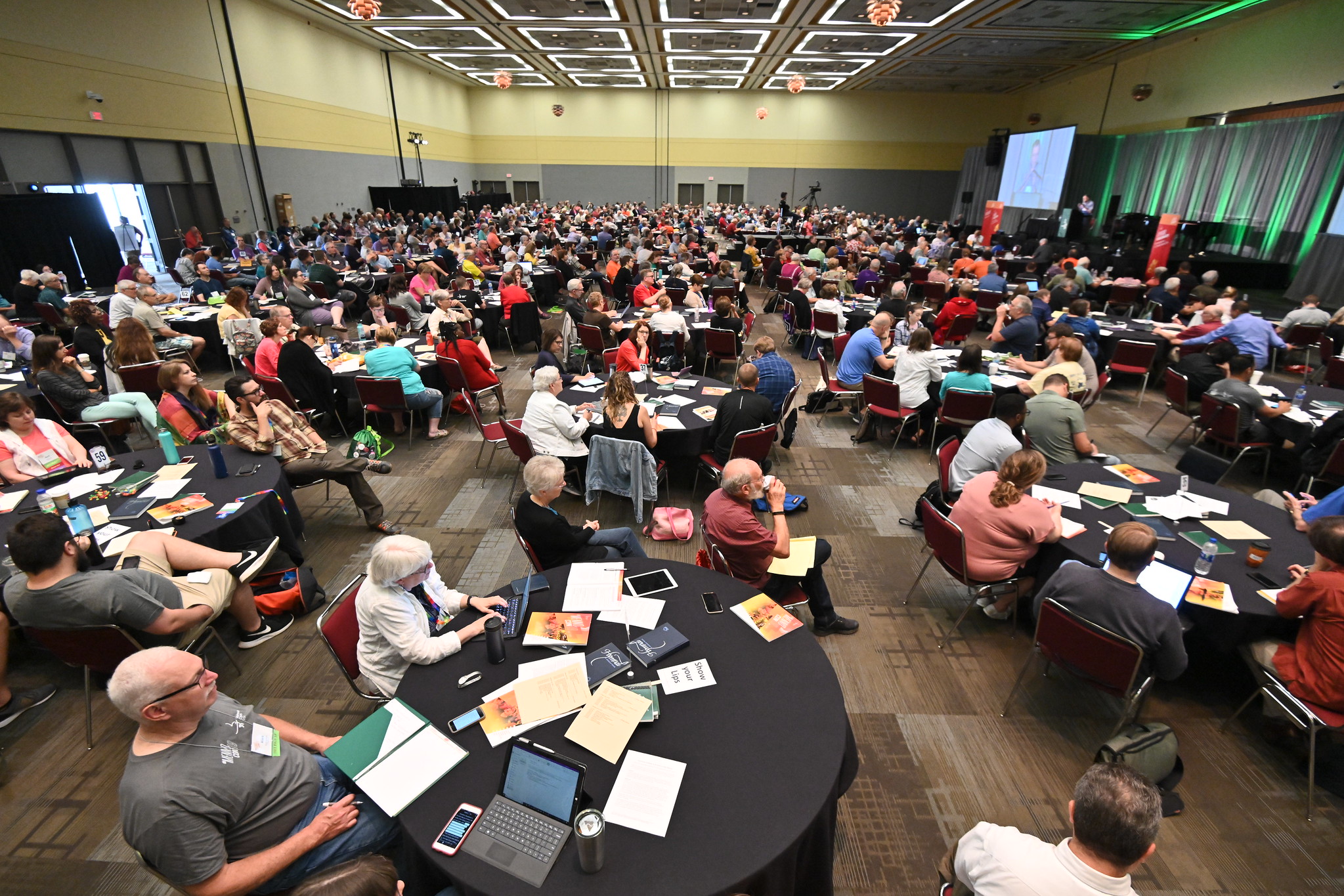 MC USA delegates vote to pass a chuchwide statement that condemns the treatment of migrant children on Sat. July 6.

KANSAS CITY, Missouri (Mennonite Church USA) — Early Saturday morning on July 6, the 495 delegates from Mennonite churches around the country gathered at the Kansas City Convention Center to discuss and vote on the Churchwide Statement on the Abuse of Child Migrants, which had been introduced to the Delegate Assembly a day earlier. The resolution passed with just two people dissenting.

“As a historic peace church founded on the principle that Jesus’ life, death and resurrection call Christians into reconciled, righteous, and right relationship, Mennonite Church USA finds the treatment of immigrant families and children at the border, as well as around the nation, a horrific violation of the Image of God and God-given human rights,” the statement’s summary reads.

The statement says that Mennonite Church USA delegates “stand against the traumatic separation of families” and “call for a change in policy and action by the United States government.”

“This resolution gives us language that we can use with confidence that we are expressing the corporate witness of our church in our work,” said David Boshart, moderator of MC USA.

Boshart noted an article in that week’s New York Times that shared the stories of immigrants who have received enormous fines from ICE for taking sanctuary in churches, including Columbus Mennonite Church in Columbus, Ohio, and Chapel Hill Mennonite Church in Chapel Hill, North Carolina. Samuel Voth Schrag, chair of the Resolutions Committee, gave a short presentation around updating the resolution’s language after receiving feedback.

After delegates discussed the final resolution at tables, several responses were raised at the mic that illustrated a diversity of perspectives from across the church, though nearly everyone began by noting their support of the resolution.

Several people advocated for including a list of resources for how to get involved and actions that could be taken along with the resolution, encouraging the group to take action when they return to their home churches. A delegate from San Antonio Mennonite Church offered the church’s Facebook page as a place to find resources on how they have been working to assist migrants. One question centered on why the resolution focuses mostly on children when parents and single adults are suffering as well. Another delegate led the group in prayer over the document.

One delegate shared that while he supports the resolution because of how he understands Jesus calling us to treat individuals, he knows that a significant minority of his congregants will be unhappy with the resolution due to their concerns with what they see as the bigger issue of a broken immigration system. While one person expressed that they felt the word “condemning” was not in line with being a peace church, another person expressed that the language was too weak, that the church should use stronger language to name the ways the government is endangering children.

“As disciples of Jesus called to care for those in need, we believe the actions of the U.S. government are unconscionable, and we condemn these practices and commit, as peacemakers, to building better processes for migrants,” the statement reads.

The role of MC USA moderator was ceremonially transferred to Joy Sutter of Harleysville, Pennsylvania, who has served as moderator-elect for the past two years. Linda Dibble of Albany, Oregon, a chaplain and Pacific Northwest Mennonite Conference leader, was introduced as MC USA’s new moderator-elect. The assembly prayed for “clarity, wisdom and good counsel” as they lead, and presented Dibble with a prayer shawl.

“This is only the second time in our history that two women are leading Mennonite Church USA,” said Sutter as delegates applauded.

This marked the final day of David Boshart’s term as moderator following 12 years of service on the Executive Board. “Dave’s leadership has been a true blessing,” said Sutter.

Journey Forward: the presence of the Holy Spirit

During their final round of storytelling and table group discussion, delegates shared about where they have felt the presence of the Holy Spirit in their lives.

“We have not arrived. We are not yet fully formed, but God is faithful on the journey,” said Jon Carlson, member of the Journey Forward Writing Team as he introduced the final Journey Forward topic: experiencing the transformation of the Spirit.

“We know that where the Spirit goes may be the wrong direction according to our own understanding,” said Natalie Francisco, discussion facilitator and member of the Journey Forward Writing Team. She said that while it’s important to make plans to know where we’re going, as God’s people we need to make ourselves “open to the suddenly factor.”

Delegates shared vulnerably during open mic time about “holy moments” in their lives.

“I came to convention with a lot of trepidation,” said Scott Peterson, pastor and delegate representing Trinity Mennonite Fellowship in Phoenix, Arizona. “I did not see a way forward for MC USA. I saw a lot of fear and a lot of mistrust.”

“But I have been amazed and impressed,” he continued. “MC USA seems like a place where God’s Spirit is alive, and I can’t put a finger on why that is. I don’t have answers, but I feel like there’s a path. God’s spirit is moving us through the weeds to a place where there is rest and reconciliation available.”