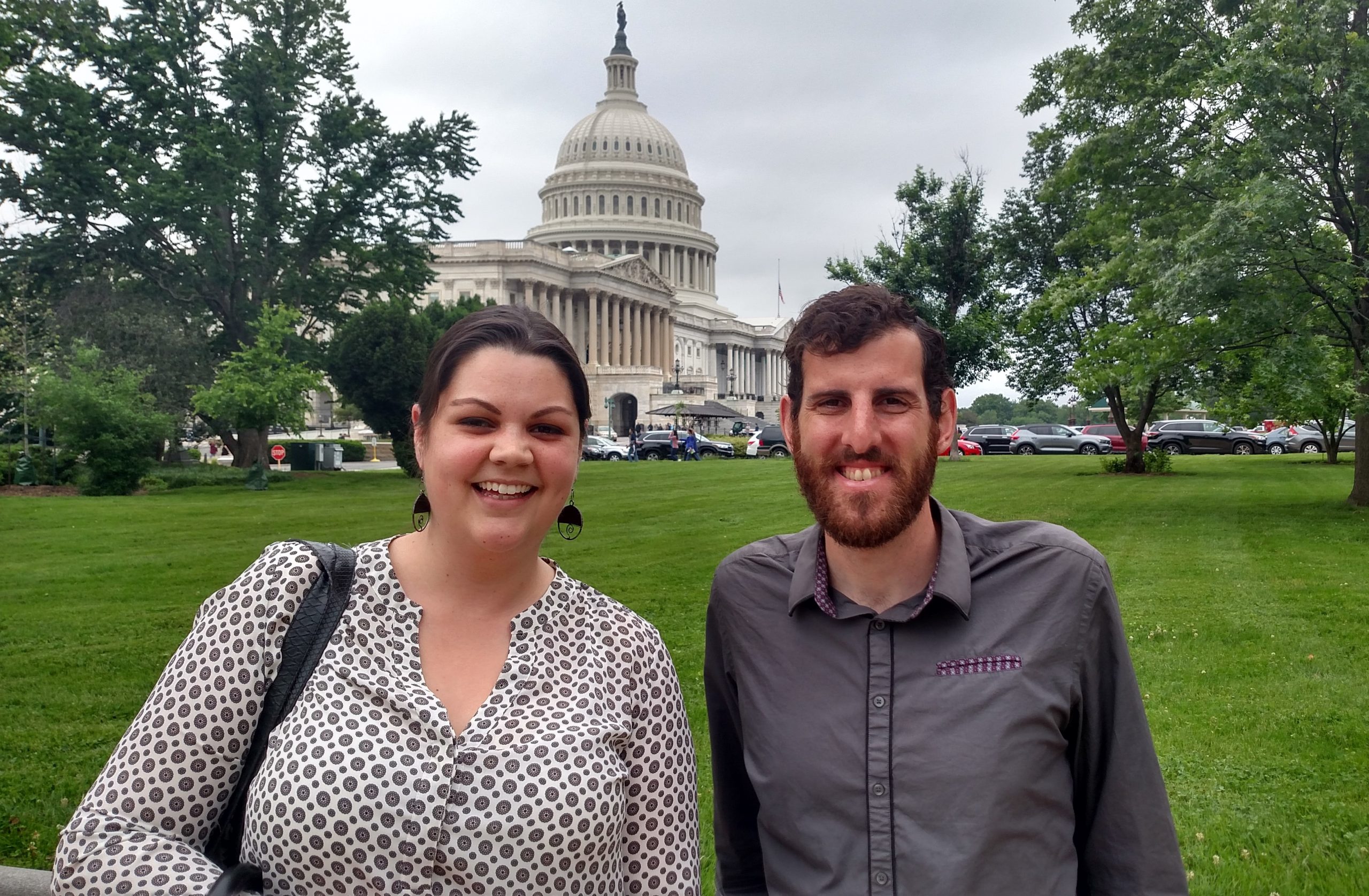 Charissa Zehr, legislative associate for international affairs with the MCC U.S. Washington Office, and Jonathan Brenneman, coordinator of Israel/Palestine Partners in Peacemaking for Mennonite Church USA, head to Capitol Hill to advocate for peace in Palestine and Israel. Photo by Stanley Green.

The visit took place just days after Israeli soldiers killed more than 60 largely nonviolent Palestinian protesters in Gaza on May 14, and many of the delegates asked their representatives to respond to this.

“I relayed my deep, deep concern about the situation in Gaza, asking my representatives to take a stand for the rights of Palestinians,” said Tim Seidel, director of the Center for Interfaith Engagement at Eastern Mennonite University, “and given the significant amount of aid the U.S. provides to Israel each year, to call for an investigation into Israeli military actions.”

Members of the delegation visited 15 congressional offices representing five states throughout the day. The advocacy event was planned and financed jointly by MC USA and the Mennonite Central Committee (MCC) U.S. Washington Office.

They asked their senators and representatives to support legislation protecting the rights of Palestinian children held in detention by the Israeli military, and they raised concerns about anti-boycott legislation in the U.S.

The delegates also shared MC USA’s “Seeking Peace in Israel and Palestine” resolution, which calls for “peace, security, justice, and flourishing of all people living in Israel-Palestine, including Jews, Christians, and Muslims.”

The advocacy visit was organized in response to the resolution, which urges people to advocate with the U.S. government “to support measures that pressure Israel to freeze settlement construction, respect the civil rights of Palestinian citizens of Israel and the rights of refugees, end the occupation, and work for a just peace in accordance with international law.” The resolution was passed by the delegate body at the MC USA convention in 2017.

“We believe this resolution offers a unique perspective based on the well-being of all people in the region,” said Stanley Green, executive director of Mennonite Mission Network, during a meeting at Indiana Senator Joe Donnelly’s office.

Each of the delegates have spent time in Palestine and Israel, some through MC USA’s Come and See tours.

“It was important that delegates were able to speak from firsthand experience in the Middle East,” said Lyndaker Schlabach. “The leaders’ familiarity with the region allowed them to speak authentically and relay the message of the MC USA delegate body to their elected officials.”

One of the key issues the leaders addressed was H.R. 4391, “Promoting Human Rights by Ending Israeli Military Detention of Palestinian Children Act” which would prohibit U.S. tax dollars from being used to support detainment and ill treatment of Palestinian children. At any given time, the Israeli military is detaining approximately 300 Palestinian children, ages 12-17, according to the Israeli Prison Service. Numerous human rights organizations, including Human Rights Watch, Amnesty International and B’Tselem, have documented widespread mistreatment and abuse in the military detention system. 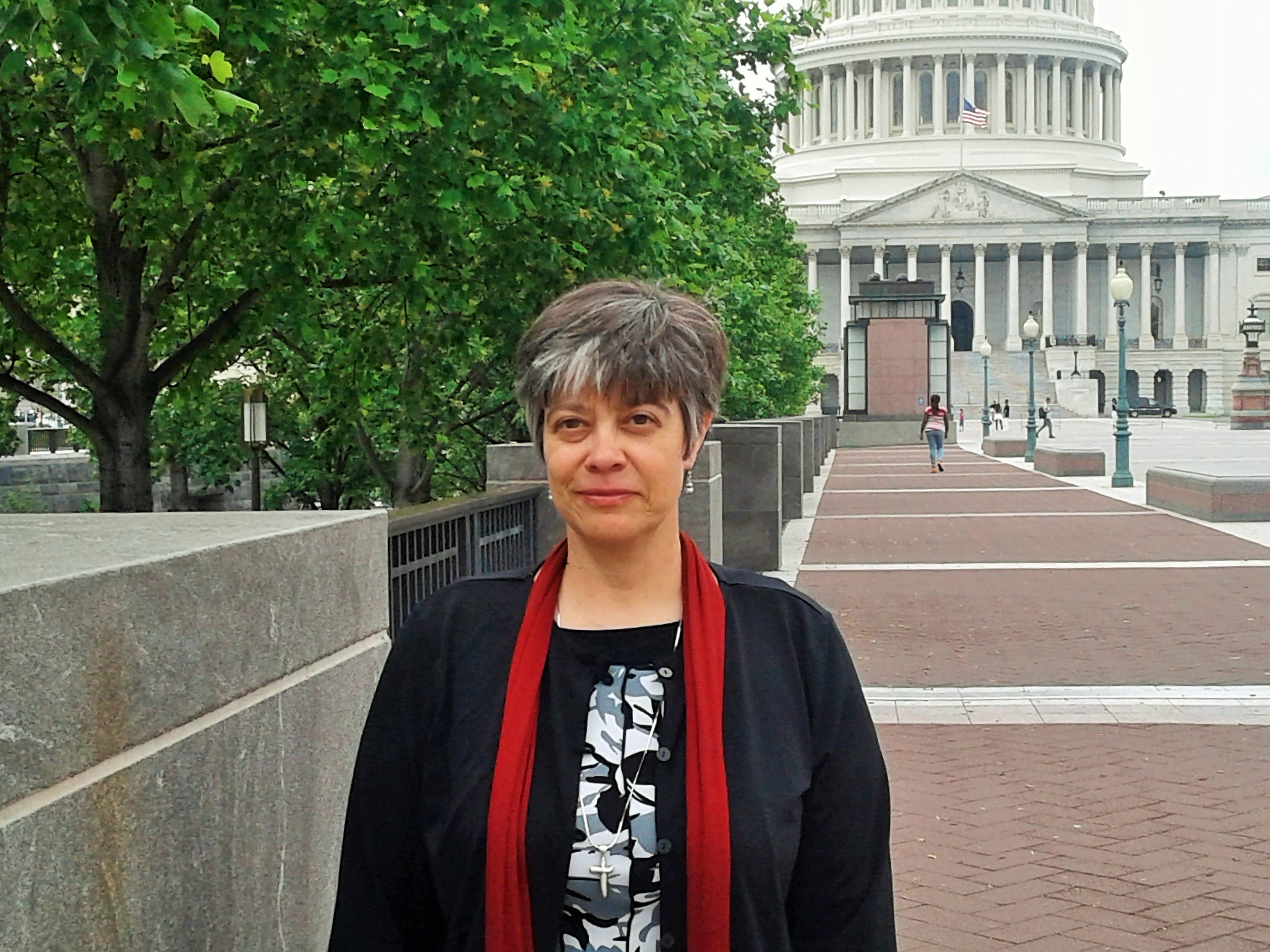 Kathy Neufeld Dunn, associate conference minister of Western District Conference, was one of the leaders from Mennonite Church USA to take part in the May congressional visits. Photo by Rachelle Lyndaker Schlabach.

“Widespread detention of Palestinian children criminalizes the Palestinian people, labeling them as threats to the outside world,” said Cyneatha Millsaps, pastor at Community Mennonite Church in Markham, Illinois, and program director for MCC Great Lakes.

Kathy Neufeld Dunn, associate conference minister of Western District Conference (WDC), shared the story of Esther Koontz, who successfully contested the Kansas law that prohibited her from participating in a state teacher program because Kansas law requires people with a contract through the state to sign an affidavit that they will not “boycott Israel or the occupied territories.”

“Many of us in WDC have begun to struggle with the issues Esther courageously raised,” said Neufeld Dunn. “What happens when my government commands me to take actions that go against how I understand what it means to follow Jesus? How will I respond?”

“We didn’t always agree,” said Boone of his elected officials, “but I believe our concerns were heard and taken seriously.”