KANSAS CITY, Missouri (Mennonite Church USA) — “As a denomination we seek connections with immigrant communities in our contexts and support those in sanctuary and the thousands of families whose loved ones have been deported,” reads one of seven commitments in the Churchwide Statement on the Abuse of Child Migrants, passed by the Mennonite Church USA Delegate Assembly on July 6. Read more about how the resolution came together at the convention here.

Several congregations and organizations shared ways they have offered solidarity with immigrants at seminars during the convention, and delegates called for additional resources and actions on how to respond to the current immigration crisis during their assembly.

Rosa Ortez Cruz took sanctuary from deportation over a year ago through a partnership between Chapel Hill Mennonite Fellowship (CHMF) and The Church of Reconciliation, a Presbyterian church, in Chapel Hill, North Carolina. “When we talk about sanctuary, it’s a specific kind of civil disobedience using the memo that directs ICE not to trespass on church properties,” said Isaac Villegas, pastor of CHMF.

“This feels like a poignant moment in the history of our church’s relationship to the nation state in this country, especially related to the government determining who can be our neighbors,” said Villegas. “As the church, we can’t help but put our bodies where our faith is and say that we welcome as part of the body of Christ the people whom the government wants to deport.”

Edith Espinal has been living in sanctuary at Columbus Mennonite Church in Columbus, Ohio, since October 2017. The church’s website lists ways for others to provide support. Immigration and Customs Enforcement (ICE) recently sent a letter to Espinal, and about ten others in sanctuary including Ortez Cruz, fining her for $497,777 for overstaying her deportation date, said Joel Miller, pastor at Columbus Mennonite Church. 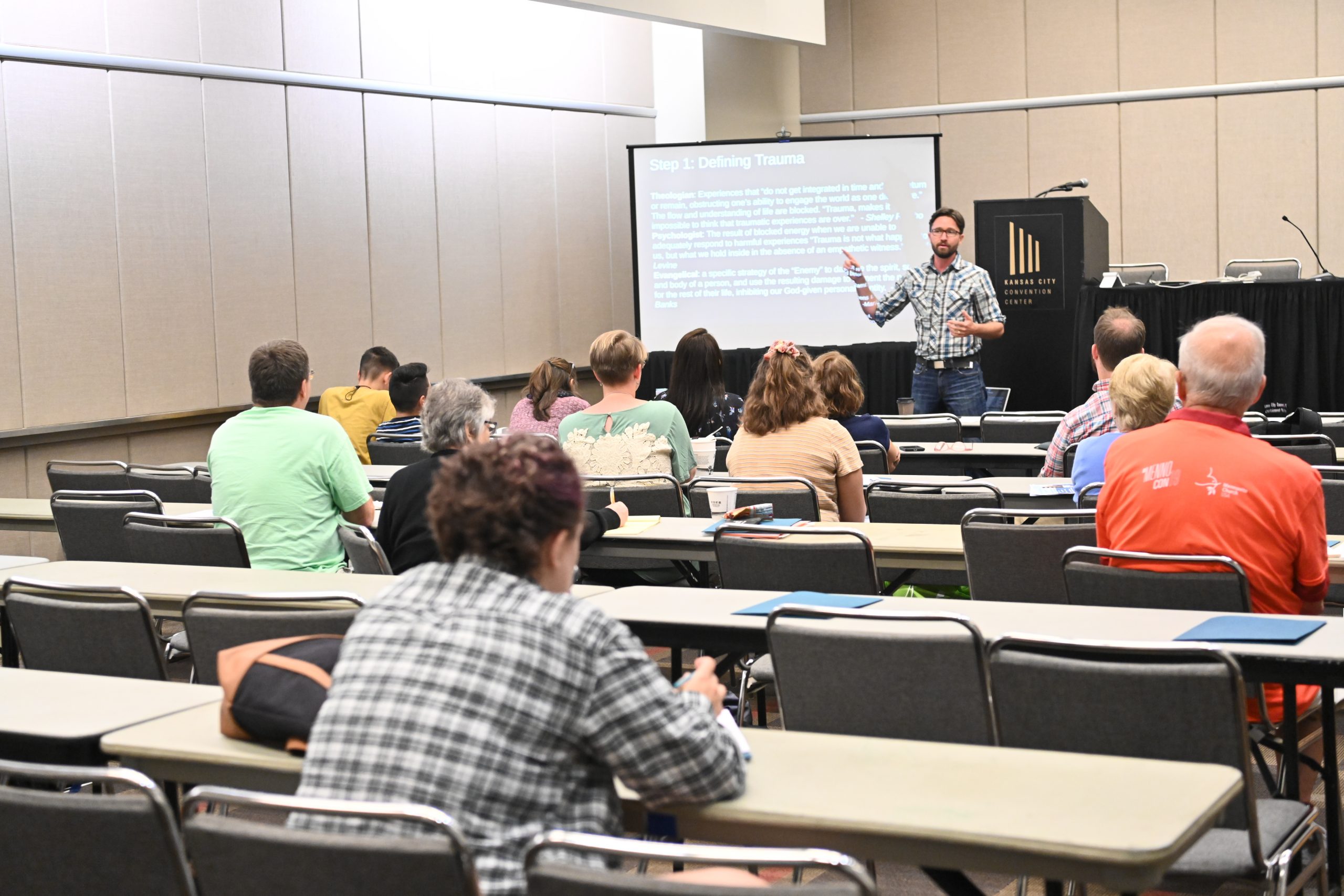 John Garland, pastor at San Antonio Mennonite Church, presents at the day-long training at MennoCon19, Welcoming immigrants in 2019: Tangible ways to put your faith into action.

“I think it’s significant that the churchwide statement recognizes that abuse and family separation is taking place all over the country, not just at the borderlands,” said Miller. “Our experience with Edith in sanctuary has opened our eyes to the extreme measures ICE is taking around our own community in Central Ohio to pursue and deport undocumentable mothers and fathers. It is heartening that we as Mennonite Church USA can have a collective witness of hospitality toward migrants and against cruelty.”

Others who presented seminars at the convention included Rachel Ringenberg Miller, pastor at Shalom Mennonite Church in Newton, Kansas, where they are actively waiting to host someone in sanctuary and are preparing to host Pause for Justice for Immigration, an upcoming prayer vigil in collaboration with local churches in Wichita on July 13. Together with Zion Mennonite Church in Elbing, Kansas, Shalom Mennonite also started a visitation program for women detained due to their immigration status, where they visit Chase County Jail twice monthly to pray, share stories and offer support to the women.

Mitzi Moore also shared from San Antonio Mennonite Church, where the congregation has used space in their building in a variety of ways to respond to the needs of refugees and migrants. RAICES (Refugee and Immigrant Center for Education and Legal Services), which has gained national attention for its work to provide legal representation and reunite immigrant families separated at the border, has a long-term relationship with San Antonio Mennonite Church and Mennonite Voluntary Service, a program of Mennonite Mission Network.

“I find hope and strength in this long history of a people who have decided that they will follow God, follow Christ’s example of love for the world, even if it means getting in trouble with the people who hold power in the world,” said Villegas. “This history of civil disobedience as part of the Mennonite tradition feels like a guiding light to me.”

Mennonite Central Committee (MCC) has been collecting donations for immigration detainee care kits that provide clothes and items for basic human needs to people when they are released after being detained by U.S. Border Patrol and ICE. They have also led learning tours along the border to bring awareness and provide tools for advocacy and engaging others in migration issues.

“We said back when we passed the Churchwide Statement on Immigration in 2003 and 2014 that we would commit to a number of concrete actions,” said Byron Pellecer, associate conference minister for Western District Conference, and a member of the team who worked on the recent resolution. “We have accomplished some of them, but there is still a lot work to do.”

Several of these actions still need our urgent attention, Pellecer said, including learning about the political and economic situations that push and pull people’s migration to the U.S., advocating for just and humane immigration poli­cies for immigrants and refugees by contacting our elected officials, and partnering with immigrant congregations to plan church services or community events.

“The best way for congregations to become involved in immigrant justice in their communities is to form relationships with those most closely affected by and engaged in the work and listen for needs,” said Miller.

For congregations and small groups interested in faith formation resources, MC USA’s Radical Hospitality: Responding to the Issue of Immigration, a free six-week curriculum, is available for use in English and Spanish. Immigration and the Bible, a Bible study produced by Mennonite Mission Network, introduces biblical foundations for the care and support of immigrants.

“The church recognizes our call to practice radical hospitality to the most vulnerable among us in these urgent times,” said Sue Park-Hur, denominational minister for Transformative Peacemaking. “MC USA will prioritize this commitment by continuing to share resources on immigration, offering learning tours, highlighting stories from across the church, and providing worship resources to help connect how our actions are rooted in our faith.”