SUGARCREEK, Ohio (Mennonite Mission Network / Mennonite Education Agency) – Nora Marleni Martínez of Metapan, El Salvador, is in the first group of students in a regional Peace and Justice Institute program of the Seminario Anabautista Latinoamericano (SEMILLA). Many SEMILLA courses are taught in local centers across Central America and Mexico, but this program was designed for students from multiple countries to study together, so traveling to Guatemala for classes was still a requirement.

But now some courses are online, making it possible for Martínez to only travel a long distance half as often. The rest of the time she doesn’t need to travel any farther than her home. 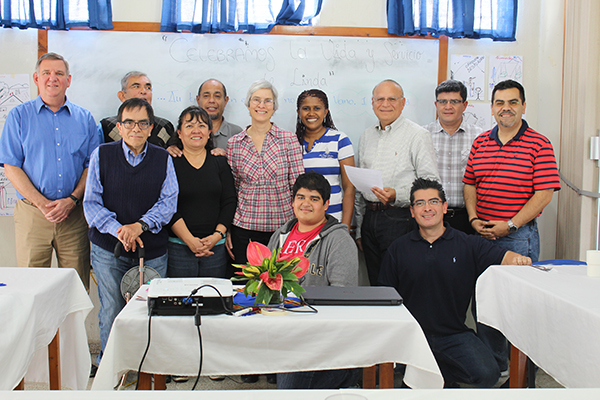 “I can make my own study schedule,” said Martínez, “and find a place where I can concentrate best.” She is also thankful not to have the extra expense of traveling for seminary courses.

Online education means more time with her family and more time to care for women in her church community and to meet with other women theologians.

Her studies are teaching more than facts. Martínez is learning that peace is not the absence of conflict, but rather a way to live in the midst of conflict, she said.

Educators in recent meetings set plans in motion for more seminary programs to be available online in both Spanish and French. The goal? To make Anabaptist biblical and theological education more accessible for the roughly 417 million and 128 million people who speak Spanish and French, respectively.

Spanish Anabaptist educators from Latin America and the United States gathered Nov. 11-14 in Guatemala. Mennonite Mission Network helped bring everyone to the table, and each person brought their energy and experience. The following organizations were represented:

Each of the programs have either started online courses, had students studying online elsewhere, or were requesting funds to set up online theological education programs. At the January 2016 meeting of the Council of International Anabaptist Ministries (CIM), the Latin America Committee designated resources to help initiate Anabaptist online theological education. Mennonite Mission Network added funds from a New Opportunities grant and helped gather people together.

Mission Network’s Latin America Director Linda Shelly reflected, “We felt it was important for everyone to come to the table to be able to envision together the benefits of an integrated approach. The spirit of collaboration was strong as representatives shared about their programs, saw the similarities and differences, and anticipated new opportunities for students.”

The group noted also that there are Spanish-speaking students around the world in places without an Anabaptist leadership development program who will be able to enroll online, plus other programs that can join or connect in some way with this new initiative.

Anabaptist Mennonite Biblical Seminary and the Institute for the Study of Global Anabaptism (Goshen College, Indiana) have taken the lead in setting up an Anabaptist Biblical Library in Spanish. In the meeting, SEMILLA agreed to give direction to a discernment process for priorities in posting books in the new Biblioteca Digital Anabautista, biblioana.org. Emphasis is to be given also to encouraging Latin American authors. 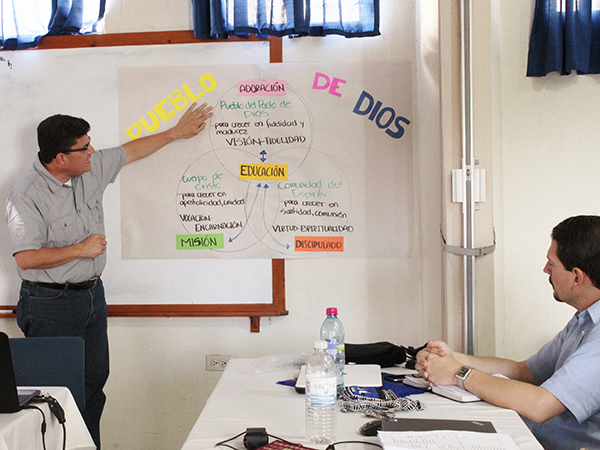 The current programs are initially calling themselves the Comunidad de Instituciones Educativas Anabautistas (CITA). Their vision is to be “an Anabaptist people formed biblically, theologically and pastorally for Christian mission in the world.” The stated mission is: “We contribute to continual biblical theological training in Spanish for the people of God in our contexts.” SEMILLA was asked to give initial coordination to CITA because of its experience in working with multiple conferences. SEMILLA will be responsible to develop agreements residing with each program.

Conversations about online education in French began in Kinshasa, Congo, in 2014 and continued into 2016. Students will be able to study justice, reconciliation and peace theology from an Anabaptist perspective at a master’s and doctoral level. The following schools and organizations committed to make it possible:

FATEAC will take leadership for the program. The seminary is accredited in Africa, Europe and North America and already offers several similar programs. Further steps will be taken after meetings in September 2017.

Online education has the potential to transcend geography and make it possible for many more people to study, especially young adults, Shelly said.

“The enthusiasm and energy that fuels these conversations come from the sense of being on the cusp of doing something really big!” said Steve Wiebe-Johnson, Mission Network’s director of Africa, referring to the response of the African leaders he works with. “Online education will provide professors and students access to articles that they never dreamed of accessing before.”