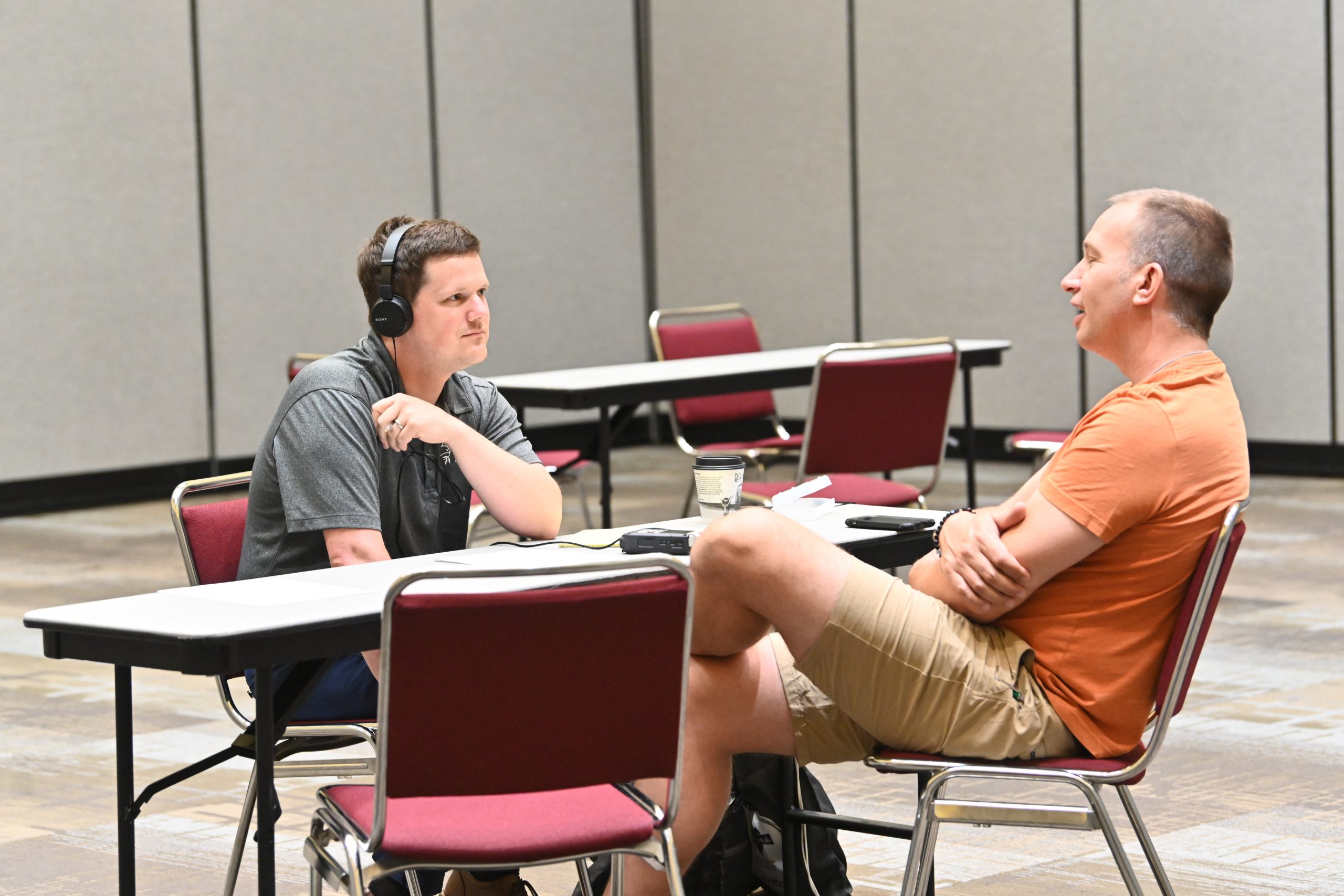 Jason Kauffman, director of the MC USA Archives, conducts an interview with David Nickel for the oral history project at MennoCon19. Photo by Kenneth Krehbiel.

(Mennonite Church USA) — This year, the Mennonite Church USA (MC USA) Archives launched an oral history project to collect interviews of young people within MC USA. The project’s inspiration came from the 100th anniversary of the Young People’s Conference Movement, which was held in June 1919 among Mennonite conscientious objectors in Clermont-en-Argonne, France and focused on priorities for the “church of the future.”

Many of the reforms for which the Young People’s Conference advocated became central to the identities and experiences of multiple generations of Mennonites who grew up in the 20th century, said Jason Kauffman, director of the MC USA Archives. Kauffman saw the opportunity to create a renewed focus on young voices within MC USA that would align with the Journey Forward goal of re-envisioning the church for the 21st century.

“Any efforts to chart a course for the future should pay close attention to the voices of young people,” said Kauffman. “They will lead the Mennonite community forward in the coming decades, and the decisions we make today will affect them the most.”

Archives staff and volunteers began the oral history project by recording interviews with 40 people between the ages of 24-40 at MennoCon19, the MC USA convention that took place July 2-6, 2019, in Kansas City, Missouri. Participants answered questions about their religious background, racial/ethnic identity and hopes for the future of MC USA. Excerpts from these interviews will be regularly featured in the Menno Snapshots blog beginning in November 2019.

The project’s initial goal was to record the voices of young people who participated in MennoCon19 as MC USA’s largest gathering of the broader church. Based on attendance at the convention, these tended to be pastors, congregational delegates, youth group sponsors and employees of church agencies and institutions — some of the people most likely to shape the direction of the broader church in the future, Kauffman said.

“Young people have a history of being catalysts for change in the broader Mennonite community,” said Kauffman. “This oral history project gives us an opportunity to learn more about young people who are connected to the denomination and what is important to them.”

Eva Lapp, former MC USA archives assistant who served as an interviewer, noted that the first round of invitations was extended to anyone ages 24-40 who registered for MennoCon19. Most of the people who responded identified as white. Lapp said she hopes the project will continue to broaden the participants to better reflect the diversity within MC USA.

“I feel so honored to have heard these stories,” said Lapp. “I hope that the project can be used to more readily understand how ‘our’ generation — as a 26-year-old myself — views and engages with the wider MC USA community and how MC USA fits into the global Anabaptist community.”

“We have no way of knowing what the Mennonite church will look like in another 100 years,” Kauffman said, “but I hope this project will capture a historical snapshot, documenting the lives of some of the people who will reimagine and lead the church of the future.”

Find more about the Young People’s Conference Movement in the Mennonite church by Jason Kauffman on the Anabaptist Historians blog:

Toward a History of the Future of Mennonite Church USA

You can support initiatives like the oral history project from The Mennonite Church USA Archives.
Our history shapes and inspires us. Donations ensure that the historical record of Mennonite discipleship across the years is preserved and accessible for many years to come.
Support the Archives today at mennoniteusa.org/give.