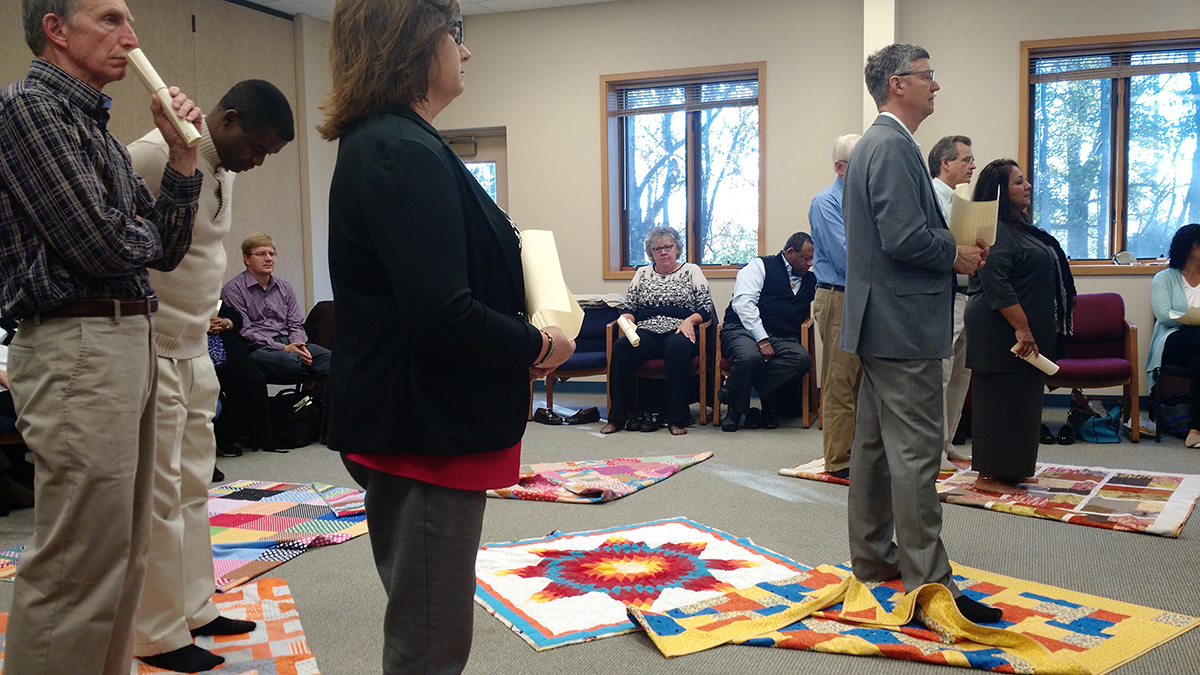 One of the topics covered in the Loss of Turtle Island is the history of forced removal of Native Americans from their land. By the end of the exercise, only a few participants remained standing. Photo by Janie Beck Kreider.

The day began with joint participation in MCC’s The Loss of Turtle Island, an interactive exercise addressing the history of violence and oppression suffered by Native Americans at the hands of the United States government, and the church’s role in creating and perpetuating the Doctrine of Discovery. That activity opened an extensive discussion on how power works in Mennonite Church USA today. (See sidebar.)

“We can be blind to the power we have,” said Jim Caskey, EB member from Goshen, Indiana. “And it’s really important for us to address the question of what informal power we do acknowledge. We have to start naming some of these things.”

By the end of the meeting, the EB had appointed a working group assigned to figure out the next steps in furthering this conversation. Leslie Francisco, David Boshart and Joy Sutter agreed to tackle the assignment using the model of the Powercube to name and analyze how visible, hidden and invisible power flows through denominational structures. Iris de Leόn-Hartshorn, director of Transformative Peacemaking for Mennonite Church USA, agreed to introduce the whole EB to the Powercube framework at its spring meeting.

Femi Fatunmbi, moderator of Pacific Southwest Mennonite Conference (PSMC) and member of the REC, brought concerns to the EB on behalf of people of color in his conference regarding an ongoing restructuring initiative championed by white conference leaders. According to Fatunmbi, the voices of leaders of color were almost entirely absent from the board meeting when the final decision was made, and white conference leaders failed to consider historical dynamics at play and cultural differences that would impact the outcome of the initiative. Fatunmbi noted that leaders of color in PSMC have responded with “frustration and anger.”

“It will take a lot of time to repair some of these relationships,” he added.

The REC reported plans to make itself available to conferences as a consultant in times of major change or decision-making impacting people of color – to equip leaders to be “proactive rather than reactive” when it comes to anti-racism and intercultural competency.

“If you’re going to be involved in relationships with racial-ethnic people you need to go and find out what makes them tick,” said EB and REC member Tina Begay of Bloomfield, New Mexico. “I’m a leader in my church and I’m respected, but yet when I come here I feel so inadequate, and I think other groups feel the same way.” She shared that even after being a part of the EB for the past eight years, she still feels like an outsider. “We need to pay attention to why that is.”

Glen Guyton, chief operating officer and director of convention planning for Mennonite Church USA, brought a new proposal for a large group process in lieu of the traditional Delegate Assembly at Orlando 2017, where agenda would be generated by the people in the room. According to Guyton, this is a process to “get a critical mass of people together, not to map out the entire plan, but to engage the planners.” Key questions up for consideration are: “What do we want to be known for as a denomination?” and “What does the future of the church look like?” 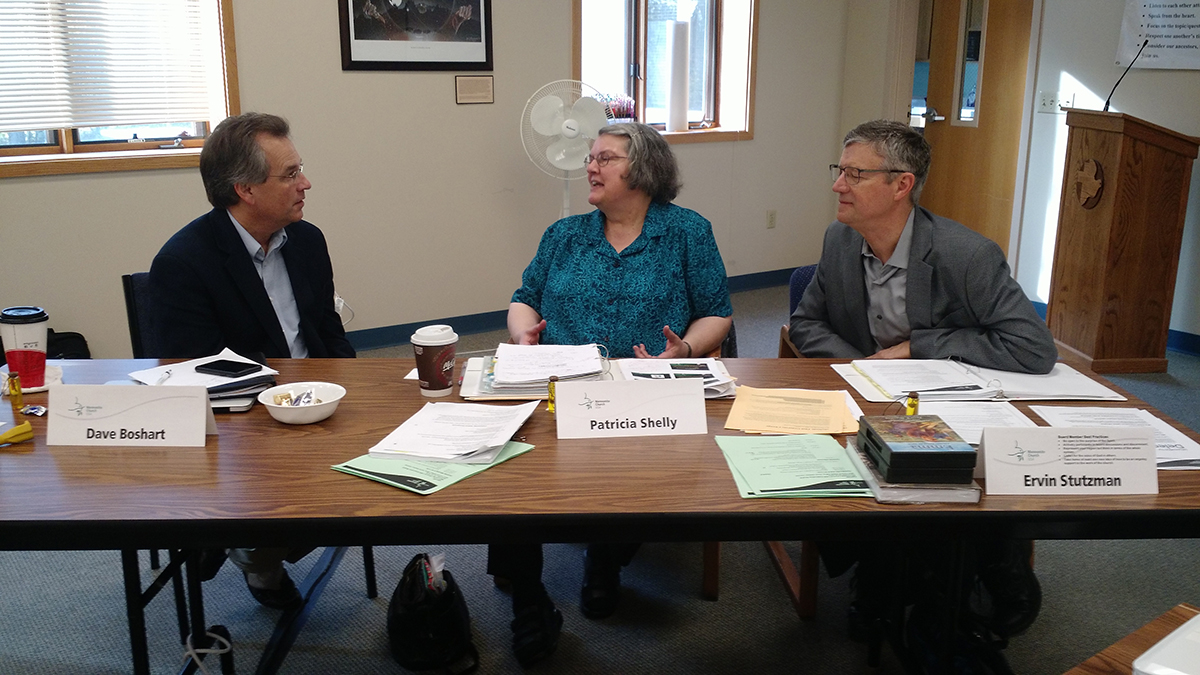 “It’s time to revise the Purposeful Plan, and this large group process is a way to do that,” EB moderator Patty Shelly said.

The process would include the following:

The EB unanimously and enthusiastically affirmed the proposal, while asking questions about whether this plan is in the budget, whether the facilitator can remain objective, who makes the decisions about who is at the table, how to get the people in the room who need to be there, and whether denominational and agency leaders will be “ready to receive what they hear and ready to change based on what they hear.”

“Whether you’re ready to change is not up to me,” Guyton said. “It’s up to our leaders.”

EB members also stressed the importance of communicating this process clearly and broadly in a “compelling way … so that people will knock down the doors down to come and participate.”

In addition to the large group process, some delegate business in the traditional style would be needed in order to officially accept the process and to consider a revised resolution on Israel/Palestine, which was tabled by delegates at the Kansas City convention in 2015. 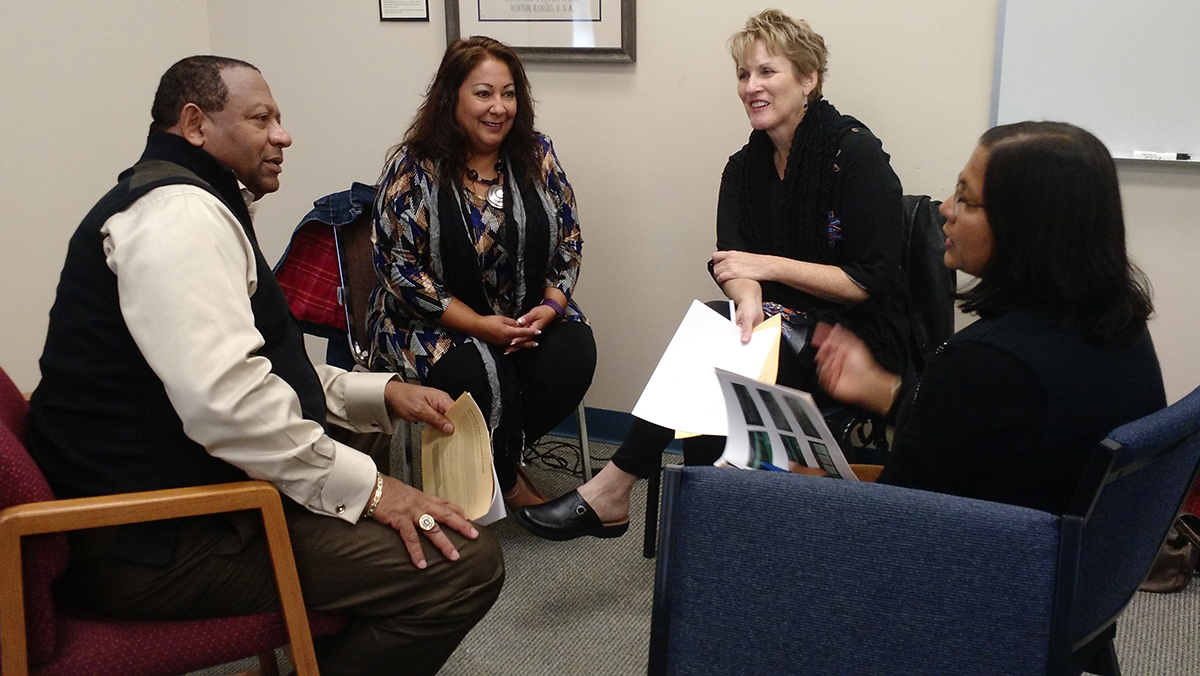 Not all EB members agreed that bringing this resolution before the Delegate Assembly would be best for the church, in light of the decision to commit fully to a new process. Some expressed concern that it might “undermine the spirit generated by the large group process and moving the church forward in a new way.” Significant conversation ensued about whether the resolution would be controversial and create an “unhelpful win-lose dynamic.” But other EB members felt the rigorous revision process produced a “much better resolution” that “more closely represents the voice of the church,” and that the EB is “legally bound” by delegates to bring the revised resolution for a vote.

Ultimately, the EB made the decision to “bring the Israel/Palestine resolution to delegates but will consider carefully how to do that.” Nine members voted yes, while five were unsure.

The EB also affirmed a proposal to appoint a standing resolutions committee that will consider resolutions throughout the biennium. The committee could decide to post some resolutions online for feedback from the church – broadening the pool of engagement beyond delegates, encouraging longer periods of processing with opportunities for education and developing stronger resolutions based on the feedback provided.

Additionally, the EB made a motion to appoint an anti-racism monitoring team for the Orlando Delegate Assembly process.

At the end of the meeting, Nisha Subaiya Springer of Dallas, Texas, commented on the energetic tone of the conversation. “This feels like such a different meeting, and I want to express affirmation for the large group process,” she said. “It felt like my first few meetings as a board member when I would leave feeling energized.”

Changes to the board

The EB discussed clarifying its role as one of visioning rather than regulation; providing oversight for the church and focusing on the things that “lead toward life rather than conflict.”

David Boshart, EB moderator-elect, suggested that the EB move toward “articulating broad understandings and providing more thought leadership for the church” while “differentiating itself from the implementation of those understandings.”

“In a way we’re catching up with practice that’s already happening,” Caskey said. “We’re designing the scaffolding around how it already works in real life.”

With no bylaw changes required, the EB made the decision to limit their numbers to 12-14 members given the financial state of the church, but keeping the same composition with mandatory representatives from four Racial/Ethnic groups. They agreed to encourage future appointments by the LDC to include people with conference leadership experience as well as younger members of the church.

The board decided to periodically appoint project-specific working groups to tackle longer assignments or work that needs to take place in between meetings.

Sutter and EB member Sam Voth Schrag led prayer and singing throughout the meetings, and passed out slips of paper with lines from “Vision: Healing and Hope” to each board member for prayer and meditation. 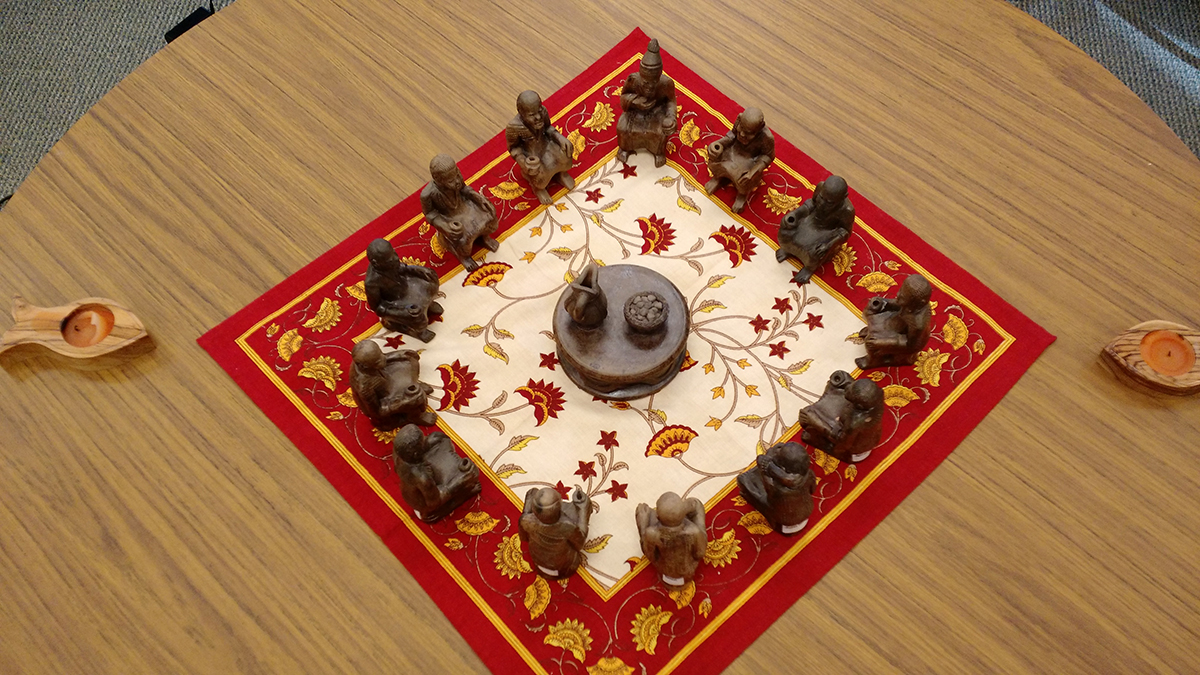 Goerzen brought a centerpiece depicting the Last Supper through the eyes of an artist from Cameroon, emphasizing the diversity of “God’s beautiful image that resides in all people.” Goerzen said that Jesus and the disciples “still made time to gather even in the midst of uncertainty and fear” and that “in moments of great scarcity, God provides in abundance.”