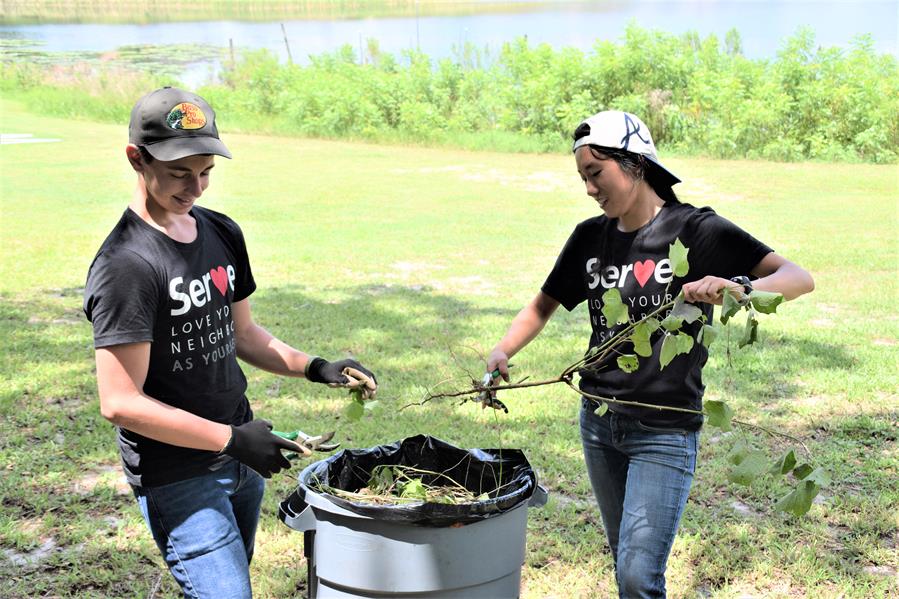 Colin Miller and Tessa Waidelich, of Central Mennonite Church in Archbold, Ohio, help rid Camp Ithiel of weeds during a servant project at the 2017 convention in Orlando. Photo by Laurie Oswald Robinson.

KANSAS CITY, Missouri (Mennonite Church USA and Mennonite Mission Network) – Roughly 3,000 Mennonites are gathering July 2-6 in Kansas City, Missouri as people seeking to be Anabaptist peacemakers in the 21st century. Glen Guyton, the first African American to become executive director of Mennonite Church USA (MC USA), will lead its 500 delegates at MennoCon19 in moving the denomination forward in efforts to promote peace, serve others and equip attendees with knowledge on topics such as planting peace churches, sharpening missional discipleship initiatives, charting a path for the future and centering marginalized communities. The group is the largest Mennonite denomination in the United States.

“Now is an essential time for us to reconnect with one another and remember why we have hope as a community of believers committed to serve as agents of healing and hope in the world,” said Guyton.

In representing the denomination’s commitment to immigration justice, Guyton recently signed on to the Religious Leaders Statement on Child Deaths in Detention, an ecumenical and interfaith coalition decrying child deaths in immigrant detention centers. Several seminars at MennoCon19 will focus on immigration advocacy, the Sanctuary Movement and how some Mennonite congregations are responding to immigrants in crisis.

“We reject our country’s mistreatment of immigrants, repent of our silence and commit ourselves to act with and on behalf of our immigrant brothers and sisters, regardless of their legal status,” Guyton said.

MennoCon19 will also include in-depth trainings around cultural competency and creating healthy boundaries within ministry settings, as well as over 150 seminars that cover topics including planting new churches and revitalizing aging ones, responding to sexual violence and abuse, racial justice, building relationships with Jewish communities, environmentalism and solidarity with Indigenous people.

Delegates will explore what it means to “forbear” with one another through disagreement, which points towards the denomination’s discernment around its policies as they relate to LGBTQ inclusion.

“The peace of Christ is a perfectly messy peace,” wrote Tom Yoder Neufeld, professor emeritus of Conrad Grebel University College in Ontario, Canada, about the sessions he will lead intended to equip convention delegates for discernment together. “To be a peace church starts at home, and is tested there as much as or more than anywhere else.”

** A Journey Forward: Peacemaking gathering planned for July 2 will bring together 45 leaders in the denomination’s conferences and agencies to wrestle with what peacebuilding means for Anabaptists following Jesus in the 21st century.

** Convention attendees are invited to the 75th anniversary celebration of Mennonite Voluntary Service (MVS), one of Mennonite Mission Network’s many Christian service programs that was birthed in the mid-1940s and is still operating today. Other milestones to be celebrated include:

** New vision and training for planting peace churches will be unveiled through the Sent Network, an initiative being launched by Mission Network’s Church Relations in late August. Church Relations staff members will also share highlights from its most recent Sent Conference, held in Denver.

** The latest developments of Mission Network’s Missional Disciple Initiative (MDI) will be shared in several events, including seminars, at the convention.