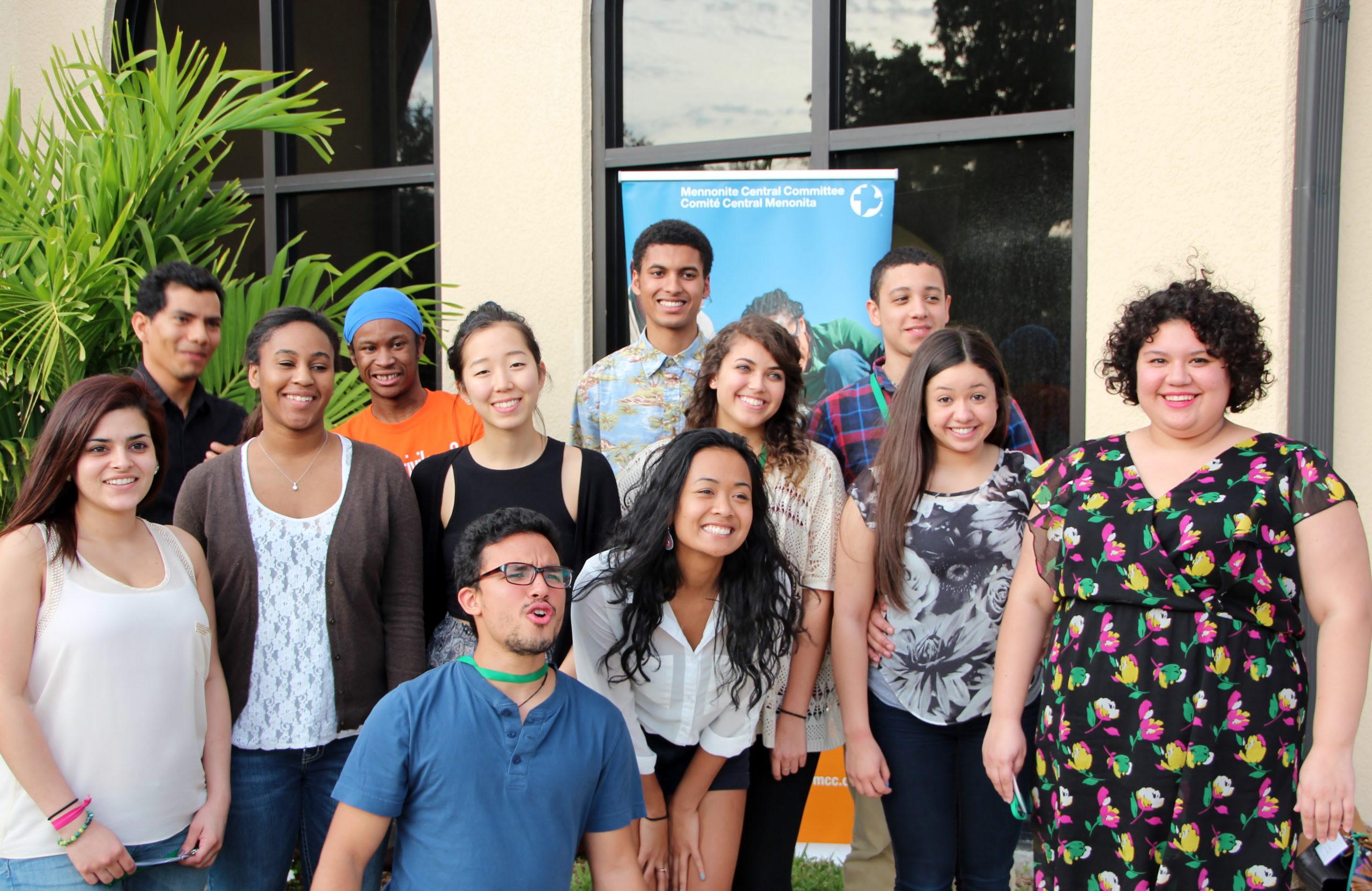 A group of college students who attended Hope for the Future 2015. This was the first year that college students were invited to the event, which seeks strategic ways to help the church embrace diversity in order to thrive. (Photo by Andrew Bodden)

This was the feeling among many young adults from Mennonite colleges and universities who attended Hope for the Future IV, Jan. 23-24, 2015, at Iglesia Menonita Arca de Salvación in Fort Myers, Fla. For the first time, Latino, Black, Native American, and Asian students were invited to the annual gathering that bonds people of color who are in leadership positions in various Mennonite Church institutions. The event seeks strategic ways to help the church embrace diversity in order to thrive. The Mennonite Church is growing rapidly among people of color, while declining among Whites, according to Mennonite Church USA.

Fourteen students from Goshen College, Eastern Mennonite University in Harrisonburg, Va., and Hesston (Kan.) College were among the more than 100 participants, which included Whites for the second straight year.

The students first met in their own caucus group in a separate room to get oriented to the background of Hope for the Future, which began in 2011. Regina Shands Stoltzfus, one of the event’s planners, facilitated the student group and explained that all participants were first separated along racial lines so that honest expression could happen in a safe space.

During the three-day gathering, the students mostly interacted with other participants at worship or meals and in mixed discussion groups, where they evaluated case studies on the dynamics of power in relationships.

The students agreed that the opportunity to network with and to learn from older leaders was empowering and refreshing. They talked openly about the challenges of navigating majority White environments, such as their respective campuses. During a break, some of the students discussed how cultural exchange at Mennonite schools feels like a one-way conversation to them; people of color must learn about the dominant culture, while most of their White peers do not feel the need to reciprocate.

“In high school I sat at the ethnic table where all of the people of color sat and ate lunch together,” said Parks, who traveled from inner-city Philadelphia to the school. “It was the one hour where I could speak my language and I could speak the euphemisms and idioms that I was used to hearing and people understood me. That’s what carried me through.”

Parks said that the racial dynamic has been sadly similar at EMU.

“Looking back on it, it’s interesting that I am expected to learn your language, your culture, but you never expect to learn mine, and, in fact, you make the choice not to learn mine,” Parks said. “How do we have a cross-cultural experience when it’s only one way?”

Alice King, a Latina freshman at Hesston College, said that her experience at a majority Black high school in urban Ft. Myers, and growing up at Iglesia Menonita Arca de Salvación, where her parents co-pastor, did not prepare her for rural Hesston culture.

“It’s a culture shock going to Hesston,” King said. “In Hesston they try to make all of us very well-rounded and indulge in other cultures, but most of the White students don’t do it.”

For example, King said the Multi-Cultural Club, which exists to encourage cultural exchange at Hesston, will put on programs, but White students are typically no-shows; they apparently assume the programs are not for them.

King, who said there are a few Whites in her small circle of friends at Hesston, said the cultural divide is complex because it doesn’t always involve race or ethnicity. It could be small town vs. a big city mindset, or East Coast mentality compared to Midwestern or Southern, and so on. Sometimes it’s hard to know which dynamic is most at work.

The high school and college years are often difficult times as adolescents and young adults strive to discover who they are and to find their footing. Feelings of isolation can be normal for any student, regardless of their race or ethnicity. Sometimes students can be inhospitable to other students simply because they do not know them and fear the awkwardness, insecurity or rejection that can result when reaching out to a stranger. For example, White children of missionaries who have been born and reared overseas, often report experiencing stand-offish behavior from White students who have been born and reared in North America. Adjustment can be hard for Canadian students in the United States and vice versa. Oftentimes social class and economic status are key fault lines. For people of color, the added strain of navigating as a “minority” often leads to cries of racism. Depending on the situation, racism isn’t always the culprit. Meanwhile, being racist isn’t always intentional.

“One of the most significant ways that DOOR expands the cultural mindset of White participants is by putting people of color in charge of them,” said Glenn Balzer, DOOR’s executive director, referring to DOOR’s diverse staff. Participants are also diverse.

Radical Journey places participants into a culture where they are in the minority, and they are challenged to become learners in that setting, said Sharon Norton, director.

“They live with host families where they can see close-up what real life for an Indonesian or Bolivian or colored (designation for people who are mixed race) South African family is like,” Norton said. “They are uncomfortable for much of the year as nothing is like what they are used to at home.”

Dona Park, a Korean-Canadian and sophomore at Goshen College, said that intentional committed outreach is a key to opening opportunities for real cultural exchange. Park said that she wants to improve understanding among international students as well.

“If we tried to find out what our experiences are, we can kind of sort out the different categories and focus more on what we have in common,” she said. “We have to force people, almost, to move out of their comfort zones.”

Loren Swartzendruber, president of EMU, said he wasn’t shocked to hear of the experiences of many “students of color” regarding their White counterparts. He said that he has had many conversations about cultural exchange with students over the years. Swartzendruber said that “White privilege,” the result of the historic and systematic implementation of policies that favor Whites over other groups, can form a blind spot for many Whites. They fail to see that they’re not interacting or understanding with mutual respect and equality.

A native of Kalona, Iowa which is 98 percent White, Swartzendruber said that his children benefited from cultural exchange when the family moved to Elkhart, Ind. The children attended a predominantly Black school.

“It was a little frightening at first because it was just different,” said Swartzendruber, reflecting on the experience of his children, who are now adults. “But they, and we, all made the adjustment and see the experience as positive and probably the most impactful of their formative years.”

Swartzendruber agreed that professors making multicultural events mandatory for all students would create opportunities for real cultural exchange. He said that at EMU persons of color are more than 35 percent of the incoming students in the 2014-2015 school year—the highest ever. However, he said this creates other challenges because the school’s faculty and staff racial composition “isn’t even close to that percentage.” Swartzendruber said that he has discussed this challenge with leaders of other Mennonite colleges, and that they agree they must continue broadening their recruitment efforts. They also must groom current students of color to become future faculty and staff members.

Parks said that “navigating the world as a Black body in a very White space,” has been easier at EMU, but still challenging.

“Sometimes I still have to have really hard race conversations with people who I just think that I should not need to,” Parks said.

Nonetheless, Parks aims to be a bridge-builder—like the planners and participants of Hope for the Future IV—working for reconciliation within the Mennonite Church.

Molly Heusinkveld, a Black freshman at Hesston, said that she is used to being stared at by Whites as though she were somehow odd. A native of Iowa (people of color are about seven percent statewide), Heusinkveld shared that she is adopted; her parents are White.

“It’s nice being in this environment,” Heusinkveld said about Hope for the Future IV. “I get to be with other people who are considered different as well.”

“And we laugh at your jokes, right?” King chimed in, grinning.

“Yes, you laugh at my jokes,” Heusinkveld said, smiling.

This is a joint release by Mennonite Mission Network, Mennonite Church USA, and Mennonite Education Agency.

A group of college students who attended Hope for the Future 2015. This was the first year that college students were invited to the event, which seeks strategic ways to help the church embrace diversity in order to thrive. (Photo by Andrew Bodden) Download full-resolution image.