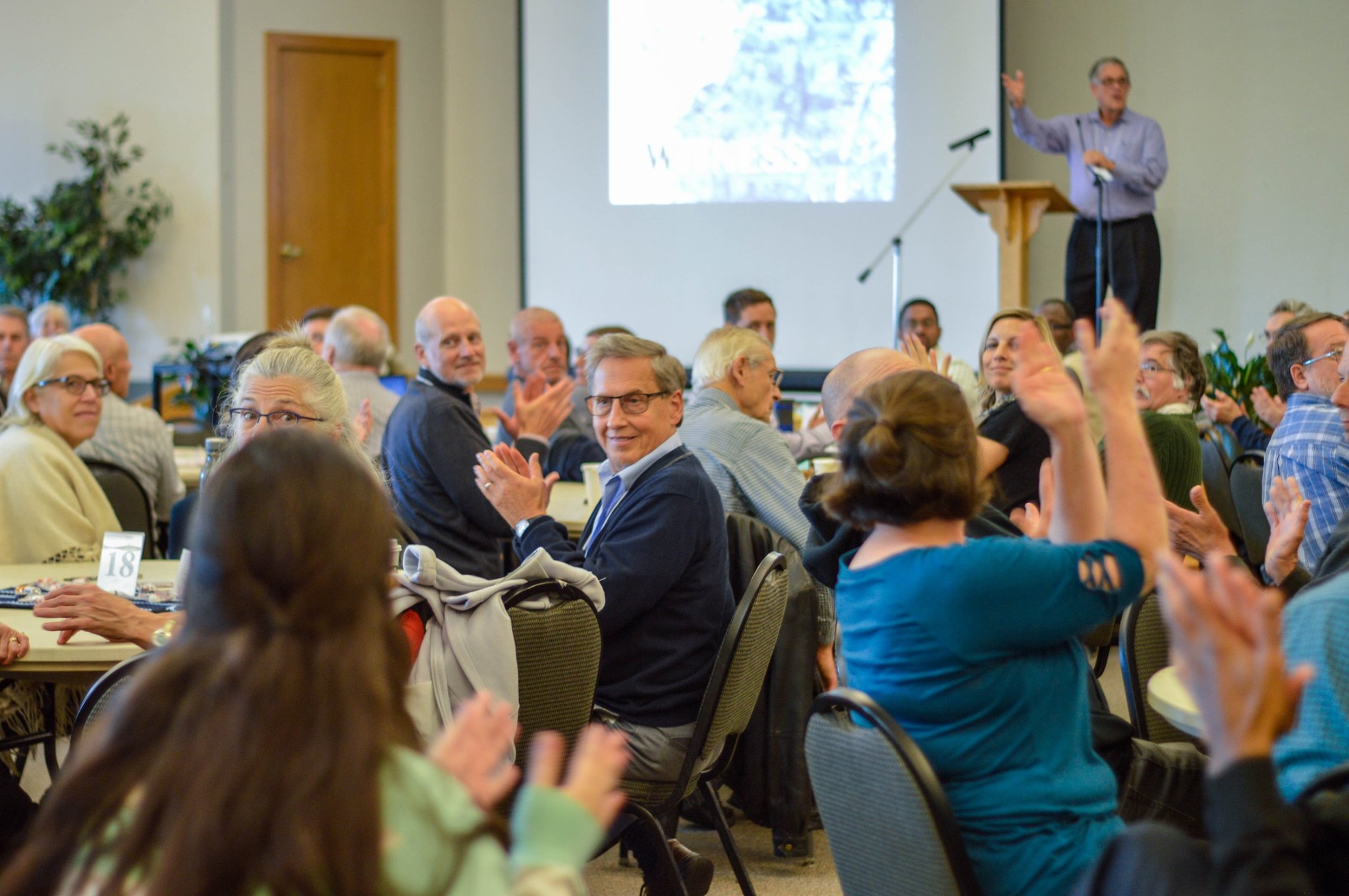 SOUDERTON, Pa. (Mennonite Church USA) – There was a palpable feeling of tense excitement at this year’s Joint Assembly of Eastern District Conference (EDC) and Franconia Mennonite Conference (Franconia) on November 2, 2019, at Souderton Mennonite Church, Souderton, Pennsylvania. The anticipation exploded into applause, when James Musselman, moderator for EDC, and John Goshow, moderator for Franconia, read the results of the delegate vote that unanimously affirmed the reconciliation of the two conferences.

The reconciliation between the two Pennsylvania-based conferences ends the split that took place 172 years ago, which divided families, friends and churches over issues such as modern administration, freedom in dress and conduct, education for pastors and the creation of publications.

“I am so thankful that this historic event is taking place,” said Mennonite Church USA (MC USA) Executive Director Glen Guyton to the Assembly in a prerecorded video statement. “With God anything is possible. I know it’s taken many steps to get you to this place, but I am so proud to be a part of the church when we can work at reconciliation, heal old wounds and move forward together in the newness of Christ.”

The vote affirms a reconciliation process that began in 2011, when delegates at a Joint Conference Assembly voted to continue conversations about a shared future. The next few years drew the conferences together, as they acknowledged past hurts, offered apologies and envisioned the journey forward.  A joint reconciliation team worked to lay the foundation for the new, united conference. At this year’s Joint Assembly, delegates voted to accept the bylaws of the new conference, the Structure and Identity Taskforce’s final recommendations, and the plan of merger, including the new Conference Board.

The new conference has not been named yet, as the Taskforce’s Naming Committee continues the important work of discernment and discovery.

Following the reconciliation announcement, Hendy Matahelemual, Franconia pastor of formation and communication and Assembly worship leader, led the gathering in “Hosanna,” a global praise anthem, to represent the multicultural family and vision of the new conference. Tami Good, pastor at Swamp Mennonite Church, Quakertown, Pennsylvania, then led the Assembly in “Praise God from Whom,” sung in traditional a cappella style to represent the conference’s historical roots.

Steve Kriss, executive conference pastor for Franconia, introduced a shared time of Communion, commenting, “We are about to do something we could not have done 150 years ago.” Delegates served one another communion at their tables in a moment that evoked the Assembly’s theme, “Witness,” based on Hebrews 12:1-3, which reminds us that we are “surrounded by such a great cloud of witnesses” and encourages us to, “run with perseverance the race marked out for us, fixing our eyes on Jesus.”

The new MC USA Conference officially will begin operations at the start of the new fiscal year on February 1, 2020.