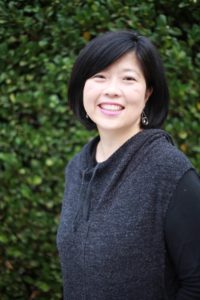 Sue Park-Hur is an ordained Mennonite pastor and co-director of ReconciliAsian. The following piece is based on a sermon she gave at Hope for the Future, the annual gathering for people of color working within Mennonite Church USA, its agencies and institutions.

The king of Egypt said to the Hebrew midwives, one of whom was named Shiphrah and the other Puah, “When you act as midwives to the Hebrew women, and see them on the birthstool, if it is a boy, kill him; but if it is a girl, she shall live.” But the midwives feared God; they did not do as the king of Egypt commanded them, but they let the boys live. So the king of Egypt summoned the midwives and said to them, “Why have you done this, and allowed the boys to live?” The midwives said to Pharaoh, “Because the Hebrew women are not like the Egyptian women; for they are vigorous and give birth before the midwife comes to them.” So God dealt well with the midwives; and the people multiplied and became very strong. And because the midwives feared God, he gave them families. Then Pharaoh commanded all his people, “Every boy that is born to the Hebrews you shall throw into the Nile, but you shall let every girl live.”

We gather recognizing that we were created for community and we need each other. Many of us have stayed connected through Facebook, emails, texts and other means, but this sacred act of gathering face to face, being physically present, holding each other, hearing the echoes of laughter and the lament — this is what sustains us and for the long journey.

While I am super excited that we are here, another part of me is on the other side of the world, in PyeongChang, South Korea. People from all around the world are gathering for the Winter Olympics opening ceremony tonight. During such an intense and threatening time of political escalation and a real possibility of a nuclear war, we will witness North and South Korea walking together in unity and hope for a different future. We need to pray urgently for peace both here and around the world — that we can recognize the image of God in all people and stand against all forms of violence.

On our first evening together, I’ve been asked to give a reflection on the first chapter of Exodus. The book of Exodus centers around the creation of the community of God, narrated through Moses. But we also know that the story of Moses is a story that would be impossible without the strength and courage of — surprise — women!

There is Jochebed, Moses’ mother, who refuses to obey the unjust law of the state and keeps her son alive. There is Miriam, Moses’ sister, who keeps eyes on him from a distance as he floats in his basket. It is she who brings their mother to Pharaoh’s daughter to be his wet nurse. Then there is Pharaoh’s daughter, the Egyptian princess, who takes the baby she knows is a Hebrew boy and raises him under the roof of her father, the man who mandated all Hebrew boys be killed.

Exodus 1:15 records that Shiprah and Puah were Hebrew midwives. These women were not the only two midwives to the Hebrews, but most likely the heads/supervisors of groups of midwives. Many also agree that they were most likely not Hebrews since Pharaoh was plotting the mass killing of the Hebrews and wanted their participation.

I’ve been thinking about these women a lot. I don’t know about you, but if you are part of an economic system that you benefit from, it’s hard to refuse the established order. It’s even harder when the leader who holds the most power and is deemed a god of Egypt calls you into the palace and tells you to participate in his scheme. It is really hard to say no. When the oppressive political, economic and social machine presses you to follow orders — don’t think about it, just do it — what would you do?

How were the midwives able to stand against the mandate of the pharaoh? We don’t have to guess in this passage because immediately after the mandate, verse 17 says, “the midwives, however, feared God.” They feared God. Their source of courage came from fearing God. The fear, the awe and the awareness that the ultimate source and power did not come from the Empire or one person, but their source of security and truth came from God. They had minds that were transformed, not conformed by the fear of the Empire. Erica Littlewolf shared with me a definition of fear that came from her father: “Fearing God is respecting the mystery of God.”

I also believe that they were able to resist because they were together. They struggled together. They thought hard about the gravity of the mandate and its consequences — together. The importance of being together, processing in community, gives us courage to make difficult choices. Perhaps their courage rose out of their work. They knew their calling. They were the healers who assisted in bringing life into the world. They knew who they were and what they were called to do and be. What Pharaoh demanded from them went against who they were. Together, Shiprah and Puah literally aided in the birthing process of individual women. And in their refusal to obey Pharaoh together, they assumed a key role in the collective birthing of the people of Israel.

When the king commanded death, these midwives spoke up and spoke life.

The word that kept surfacing in my mind as I thought about Puah and Shiprah’s actions is conspire — to make a subversive plan for a specific result. If we look at the Latin roots of conspire, we find: con which means together and spire which means breathe. Breathe together.

These women help mothers giving birth to breathe. To inhale and exhale, pain and life that co-exist. Inhale pain and joy, exhale death and life. They assist mothers whose bodies are traumatized in the process of giving birth to be aware that what is happening is bigger than their pain, that life with new possibilities and hope will be unleashed. They conspire to speak up to the angry ruler. They answer Pharaoh, “Hebrew women are not like Egyptian women; they are vigorous and give birth before the midwives arrive.” They risk their lives to conspire against the king. I love this word and I think it is fitting to use this word to describe these midwives.

They were courageous conspirators.

It is in their conspiracy that life was preserved. And the conspiring, the breathing together, is also singing! We as co-conspirators are invited to sing the song of resilience in times of trauma.

I am reminded of the powerful refrain:

We shall overcome someday …

We are not afraid…

As people of God, what are we to called to breathe life into?

Brothers and sisters, may our time together give us courage to breathe deeply and to speak life-giving words in a culture of death.

We, like the midwives have been placed in leadership in various capacities in the places where we live, where we work, where we teach. God is calling us to assist in what God is birthing and to protest the evil one that is killing, stealing and destroying. This is not abstract. The U.S. military industrial complex is making a war cry in the Korean Peninsula to wipe out a nation. The prison industrial complex is creating prisons in our cities. ICE is partnering with the police to invade homes. And we as people of faith and leaders of color have said, “Enough!”

But our challenge is not only naming what we don’t want, but articulating what we want. What do we want to assist in birthing? Michelle Armster shared a story with me during lunch about her encounter with Vincent Harding. Dr. Harding asked Michelle what she did and he told her about her passion to fight racism through anti-racism training. Then he gently asked her, “It’s good to be doing anti-racism work, but what are you for?” What are you for? What are we for?

Too many times, the system keeps us busy fighting what we don’t want and preventing us from having the time to create, to envision what we want to happen.

We hope that Hope for the Future will give us that space and time to do the creative and life-giving work we are called to.

On our drive to LAX this morning, I asked my husband, Hyun what the root words for courage are in Korean. I knew that the Korean word is yong-gi but wanted to know the Chinese root word for it. He told me gi is chi or energy. Then what kind of energy? Yong means against all odds. Courage means energy against all odds. Shiprah and Puah had this yong-gi, energy against all odds that flowed from their life-giving work. And the Holy Spirit will give us the yong-gi, too. The courage to say no to death-promoting plots and to march with the courageous conspirators of our past.

One of these courageous conspirators in the Mennonite church is Dr. Vincent Harding and a book about him was released this week: “The Movement Makes Us Human” by Joanna Shenk.

I want to end our evening together remembering Dr. Harding’s prophetic words from his sermon in 1967 Mennonite World Conference in Amsterdam, Netherlands, “The Beggars are marching, where are the saints?”

“March out and be counted … March out of the conformity and out of the terror of the roaring night. You have nothing to lose but your lives, and a world to gain. March out saints. Leap up and march out. The Master is already on the road, and he says, ‘I am the way, follow me.’ Amen.”