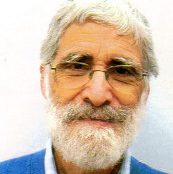 Jonathan Beachy of San Antonio, Texas, has spent a lifetime caring for and being enriched by persons society often rejects.  Those persons have included special needs students in Texas, and prison inmates and indigenous persons in South America.  As a volunteer with Interfaith Welcome Coalition he has seen the face of Jesus over and over in the faces of refugee women and children crying out for help.

“I missed my dad so much, I made a paper airplane to take me to him, but the guards took it away. They said I couldn’t have it.”

– Six year old just released after being held by the U.S. government for requesting asylum.

On May 2, along with hundreds of other persons, including other persons from San Antonio Mennonite Church, I marched to one of several detention centers in South Texas which detain women and children asking for asylum, and asked that those women be released and the centers be closed.

The women come with horrendous stories of fear and abuse; but are held as criminals in detainment camps, although in fact they are refugees.

As I walked, I fell in step with a young mother of three; one of her children was recruited by a drug cartel, and so she fled to save her life and that of her children. We were marching almost two miles and I commented to her small daughter that when she is older she should ask her mother why they marched today. Her mother smiled and said, “She knows. We were just released four days ago.” With gratitude I commented that my wife Ruth weekly visits the place she was detained. She asked who my wife is.

And then we both wept as she told her story of despair and on-going detainment with her children.  She told me how Ruth came to visit her earlier in the week, and brought her words of encouragement and hope, and somehow against all odds, she was released. The odds of the two of us meeting in a crowd of hundreds aren’t good enough for lottery betting, but they are marvelous for seeing God’s love and care.

Together we marched to challenge the incarceration of innocent women and children who have committed no crime.

Since January 2015, San Antonio Mennonite Church (SAMC) has contributed to hosting over 800 Central American refugees released from family detention centers in South Texas. In conjunction with the Interfaith Welcome Coalition (IWC) and the Refugee and Immigrant Center for Education and Legal Services (RAICES), families who are released from detention centers are transported to SAMC properties and offered food, clothing, medicine, phone access, legal services, and a place to stay the night before they depart to their destination city.

Initially, the hosting of refugee families corresponded with a shift in the federal government’s detention policy. In the summer of 2014, instead of releasing women and children coming to the U.S. seeking asylum, the government began to detain them. Most refugee families are from Guatemala, Honduras, and El Salvador and have come hoping to escape the violence perpetuated by drug cartels and gangs.

The government’s policy of incarcerating women and children seeking political asylum and holding them indefinitely in sub-standard conditions has been routinely criticized and challenged by immigration lawyers, activists, and humanitarian organizations. Amid mounting pressure, in July of 2015 the government decided to release all refugees found to have a positive fear finding, resulting in an influx of families being released. Now, nearly 15 families arrive each night at SAMC.

In addition to hosting, members of San Antonio Mennonite Church also participate in detention center visitation and advocacy actions such as marches and protests organized by IWC and RAICES.