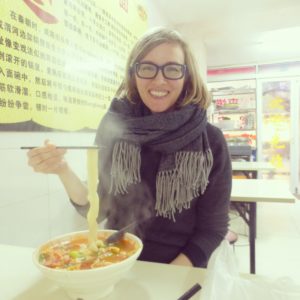 Kate Wentland teaches at China’s national seminary in Nanjing, serving under Mennonite Central Committee and Mennonite Partners in China.   Her home church is Peace Mennonite Fellowship in Claremont, California.  She graduated from Fresno Pacific University and Fuller Theological Seminary, and writes a food blog with recipes and food travel stories at:  http://keitopotato.wordpress.com/

I was nurtured with stories of sacrifice from my early years – my clan came out of the Russian experience.

I thought, as a Mennonite, I might know a few key things about sacrifice, but I found living, learning and teaching in China that I was only a beginner.

I teach at the national seminary in China. I am moved by the sacrifices my students are making in choosing to go into ministry in China. During the Cultural Revolution, church property was confiscated, seminaries were closed, many pastors were imprisoned and Christians worshiped in secret. When the Cultural Revolution was over, gutsy Christians worked to reclaim church property, making their churches public again. I wonder if I would have had the courage to do that.

Besides historical stories in my work at the seminary, I witness contemporary sacrifice and commitment from my students.

One student from the indigenous Dong ethnic minority spends all of her limited free time translating the Bible into her first language. The Dong minority group, one of the smallest ethnic minority groups in China, is known for picturesque wooden bridges and drum towers. The Dong language is an oral language, so my student is recording audio files of the Bible being read aloud in her language, and she distributes USB drives to Christians in her county, one book of the Bible at a time, as she translates them. This student is the first person from her minority group to attend seminary, and when she graduates she’ll oversee a satellite of small churches across her county.
More privileged students studied other subjects in college, but later decided to change career paths to go into ministry, giving up a comfortable life in the new Chinese middle class. One student comes from a successful business family on the coast and has two siblings living in Europe. After college she decided to go into ministry and married a man from a remote village who comes from a less privileged background. They’ll be doing ministry in his province, on the other side of the country from her family. Even though her family is living comfortably, she didn’t think material success was the most important thing in life. When she graduates this summer, she and her husband will live in a room above a church office with no facilities for a shower or kitchen. As I travel to visit my students after they graduate and start working in churches, I find that this is quite common. They often are assigned to extremely simple living quarters and are expected to work long hours – often 11 or so hours a day – usually six days a week, or five official days of work with sermon writing in their free time. And in addition, they face stricter bureaucratic realities than what I’m used to. For example, almost all of them are denied requests for vacation days for the first several years of work. When I visit seminary grads in my travels, I hear the same lament from each student.

I’m impressed with the sacrifices my students are making. I am also worried about them because burnout is all too common among Chinese pastors. I am noticing a trend of Chinese congregations expecting their church staff to work long hours without vacation time because they are serving God. It would be decadent to rest or take a vacation.

One Chinese pastor told me that this martyr mentality of church work in China was learned from watching the behavior of early Western missionaries in China.

He saw this martyr mentality as toxic and encouraged pastors to find joy in their ministries instead of serving out of obligation – to find more balance in their lives.
Since teachers in China are traditionally regarded as role models and mentors for how to live outside of the classroom, it makes sense that the missionaries were seen as models for behavior. I’m trying to model something different in my own life and service in China as a seminary teacher, finding a healthy balance between work and rest and including students in my hobbies and free time – modeling curiosity and joy in life. I am attempting to model the Sabbath.

I encourage my students to attempt to cultivate a Sabbath spirituality now while they are students, so those habits can sustain them later in life.

When I was a seminary student, I read novels, cooked from scratch, did crafts, and swam laps when I felt mentally exhausted from reading and studying. Many of my classmates wouldn’t allow themselves to read novels or watch movies because they wanted to spend every waking minute being productive, but I found I needed to take breaks from theology books to be sane and balanced. Those Sabbath habits helped me as a student and have also helped to keep me refreshed and curious in my work in China. As I develop a growing concern for my students who show signs of exhaustion, I try to encourage them to see the importance of the Sabbath woven throughout the Bible as something essential.
Because self-care in a non-individualistic context should also include relational aspects, I also encourage my students to maintain relationships with their seminary classmates so they can support each other into the future. They most likely won’t open up to their congregants when they feel stressed or worn out because they need to keep up appearances. So they will need to have each other to vent to. Living in China, it is a challenge for me to support my students who need rest, yet face a unique context with their own demands and pressures.