#WeAreMenno: I was in prison and you came to visit me 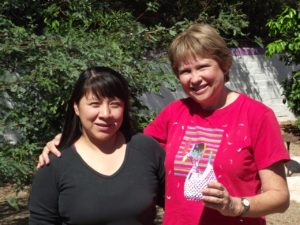 I was able to pay Yojana’s bond last fall in September 2014 (her family and I did fundraising together), and I was able to pick up Yojana the day of her release so she could spend a couple of nights at our house before she traveled to her family in Houston. I am holding an origami swan that she made in detention from folding tiny pieces of paper and sticking the pieces together with “glue” made from toothpaste. She gave this swan to me as a gift and I treasure it! There is so much creativity among the women in detention!

This is the last of a four part series featuring Mennonites working with immigrants. Projects featured in this series received grants from a special offering received at Mennonite Church USA’s 2013 convention in Phoenix toward the DREAMer Fund. These projects were chosen as grant recipients because they have a strong history of working with immigrants in their communities, especially with undocumented individuals and families who suffer from inhumane conditions in detention centers and unjust treatment in working environments.

Tina Schlabach was recently appointed co-pastor of Shalom Mennonite Fellowship in Tucson. For the past three years, Schlabach has been a part of a community visitation group connected with Casa Mariposa. Each Friday, a group of volunteers goes to visit detainees being held in immigration prisons in Eloy and Florence, Arizona, and the volunteers meet monthly at Casa Mariposa to update one another and reflect on their experiences.

I spent this morning in the visitation room of the Corrections Corporation of America Detention Center in Eloy, Arizona, about an hour’s drive north of Tucson, where I live.

The warden of this for-profit facility, which is subcontracted by Immigration and Customs Enforcement, has been supportive of our growing group of community members who offer friendship and support to women and men from many different nationalities being held in detention due to their immigration status. We appreciate the support of the warden for our visitation, and we form relationships with the employees of this facility who check our I.D.s and usher us into the visitation room.

We also lament and are angered by the structural oppression of the for-profit prison industry which makes money from incarcerating people.

Women and men, and – most recently and very troubling – mothers with young children are held in newly built family detention centers.

People spend weeks, months and sometimes years of their lives in immigration detention prisons, waiting for their cases and appeals to be heard before immigration judges.

This morning I spent time with Vilma, an indigenous 25-year-old Guatemalan woman whose first language is Mam.

She has spent almost two years in this detention center.

She is beloved by newer detainees who look to her for her kindness, for her humor and as an example of how to live for many months in the detention center.

I talked with Alma, who came to Los Angeles from Bolivia and found herself controlled and manipulated by an employer. She is waiting to see if she will be granted a T-Visa, for persons who have been trafficked.

I met Santos for the first time, a 26-year-old indigenous Guatemalan mother whose 8 year-old daughter is being cared for in Guatemala by an aunt.

Santos arrived the first time on the top of a train called La Bestia, the beast, and was deported.

She is here for the second time, starting her sixth month in detention. She cried when describing the tears and protests of her cellmate who was deported against her will last night.

And I got to know Yaritza, a Salvadoran 19 year-old, who came here to find her mother whom she has not seen for nine years, who was given a forged visa by her coyote, smuggler, and was taken into detention custody six months ago.

Why do I feel called to visit migrant detainees? It is important for us to listen to the realities of those our immigration system has isolated and incarcerated, and to share their stories.

For more information about immigration detention centers around the U.S., go to www.detentionwatchnetwork.org. For more about visiting detainees, go to www.endisolation.org.