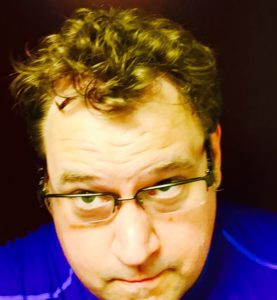 Born in New Orleans and raised a pacifist by Baptist hippies, Michael Howes married the first Mennonite he got to know, the Reverend Sue Conrad Howes, who is also a credentialed pastor in Mennonite Church USA. An unashamed nerd with a brain full of pop culture, Michael is intensely proud of his son who is beginning college, and his daughter who’s entering high school. He and Sue are excited to begin serving Akron Mennnonite Church as transitional co-pastors in mid-August. He loves listening to and learning from people’s lives, especially young adults and those who don’t identify themselves as Christians.

When I was in middle school, my mom’s best friend was someone in her graduate school cohort. I’ll call her Fatima.

Fatima was from Riyadh, Saudi Arabia, and was a devout Muslim.

Fatima was married to George, a Polish Catholic Cajun who converted to Islam prior to meeting her, when he was working as a contractor in Saudi Arabia. And people say the God of Abraham has no sense of humor!

I only had a hazy notion that George and Fatima were substantively different than my family. Fatima didn’t wear the headscarf many Muslim women today do. They seemed at least as much like my family as the families of my Roman Catholic and irreligious friends. They were simply our friends, people to whom we gave, and from whom we received, with whom we were doing life. Now that I think of it, maybe my understanding from three-and-a-half decades ago is correct: Fatima and George weren’t substantively different from me, my mom and dad at all.

What makes this #WeAreMenno material? For me, the core of being Mennonite is that we are all apprentices of Jesus, our nonviolent King. We are learning from him how to be human, something he modeled fully and perfectly for us. His Holy Spirit reproduces his very life in us and expresses it through us.

Most North Americans are both fearful of and ignorant concerning Muslims.

Whenever I realize that I’m afraid of something or someone, it’s a signal to me that I have an opportunity to let the love of Jesus grow in my life: “Love contains no element of fear in itself, but instead, the closer it gets to full-strength Jesus-love, powerfully expels fear. Fearfulness is a sign there’s still room to grow in Jesus-love” (1 John 4:18).

There is an industry in our nation, a terror lobby if you will, drawing its ever-increasing, ever-better-entrenched political and economic power from fear. Anti-Muslim bigotry and an endless war waged in an increasingly cowardly manner are both demonic in origin. The Great Good News is that Jesus has appeared to destroy the devil’s work (1 John 3:8). But he needs your life and mine – our hands, voices and hearts – to do this part of his work.

How can you participate in what Jesus is doing?

Find some Muslim neighbors and friends to share life with. Don’t start a program, or schedule an event, just initiate a friendship! Start by openly admitting your own ignorance.

Position yourself as a learner.

Ask them to describe how a core practice like daily prayer at set times affects their schedule and enriches their life. Or ask your Muslim friend what their favorite sura (verse) in the Koran is, and what it means to them.

Recognize that, like Mennonites, Muslims have different intensities of faith, and don’t put the pressure on your friend of being a model Muslim or of representing their faith, any more than you could carry that weight for Jesus, Christians or Mennonites.

Like Christians, not all Muslims have identical beliefs or practices.

Talk about stuff that very much is but doesn’t feel spiritual: paying bills, the joy of life as an unmarried adult, balancing tasks and relationships, helping kids make wiser choices, caring for aging parents. Once you’ve earned their trust, your Muslim friend may share questions they have about Christianity or Mennonites. Read the Koran. Jesus, who Muslims call Isa, is important in Islam.

Both Mennonites and Muslims are big on interwoven families. We both put energy into maintaining a countercultural faith position, and transmitting that to the next generation. And we both love to eat, filling plates with a rainbow of foods.

We are in the middle of Ramadan, a month when Muslims fast from dawn to dusk to commemorate the giving to Mohammed of the visions which make up the Koran. Ramadan ends at local sundown on July 17 in 2015 with a feast called Eid al Fitr. Your Muslim friend might mention Eid to you or even invite you to the feast!

Honesty is a necessary condition for healthy friendship.

Media outlets love to contrast violence by those who identify themselves as Muslims with the zeal of America to spread freedom. Opposing the supposed worst behavior of members of a group of which you’re not a part to the supposed best behavior of a group with which you identify is one of the worst forms of lying. Don’t tell that lie yourself, and if you hear someone else telling it, especially another Menno, call them out about it — you know, Matthew 28 pacifist style.