#WeAreMenno: Mothering and moving on 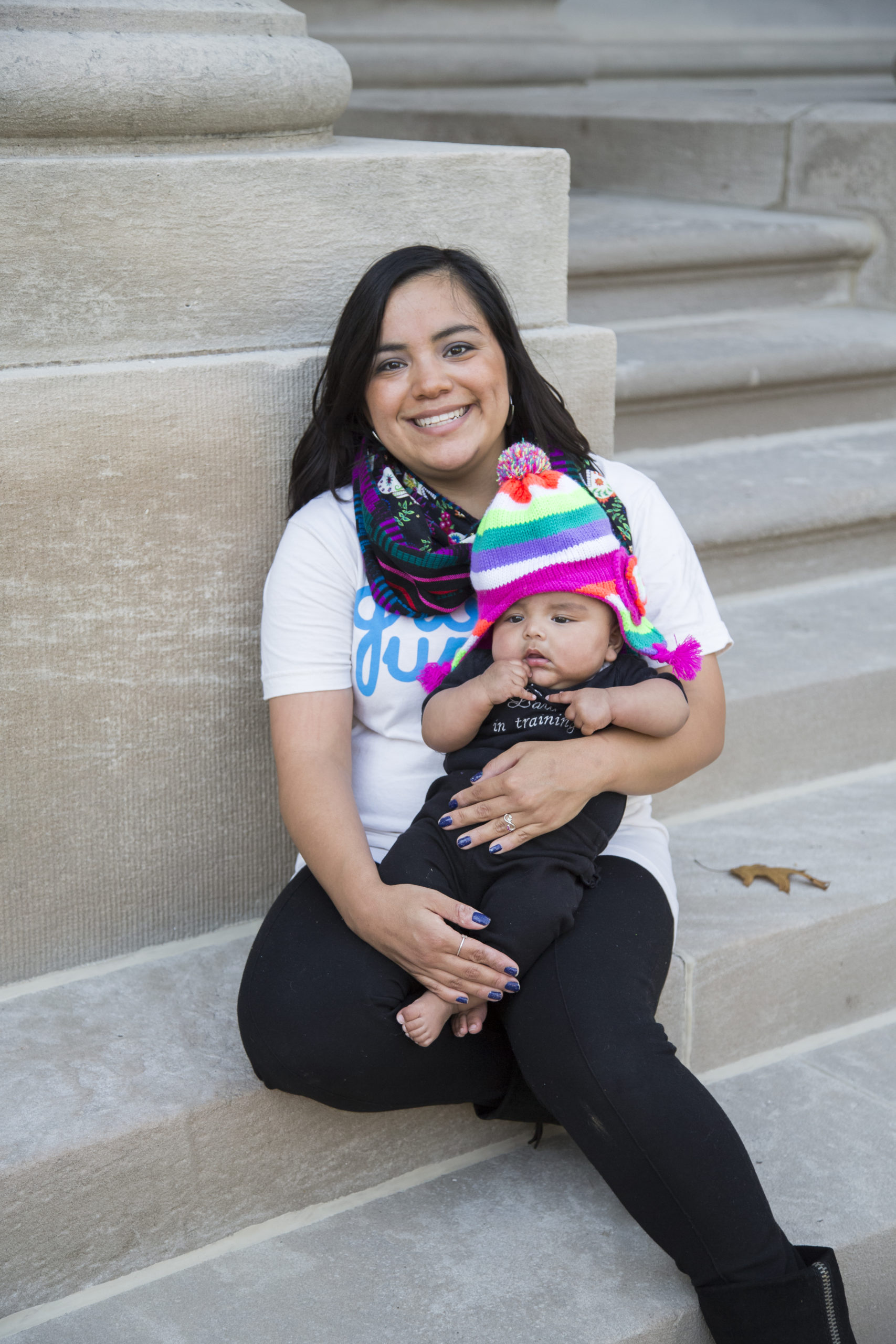 Alyssa Rodriguez attends First Mennonite Church in Iowa City, Iowa and works as a Family Support Worker for marginalized populations while also learning the ins-and-outs of motherhood with her beloved daughter, Zulema.

As I reflect on celebrating my first Mother’s Day as a mom soon, I must make one hard admission.

I did not always celebrate earning the title, “mother.”

I imagined carrying that title … years from now. And there was so much to do before that moment.

While I was making baby registries, occasionally browsing baby name apps on my smartphone and avoiding the pink aisle as I selected nursery room colors for my baby girl, I also was speaking to local law enforcement authorities to document my experience of being raped.

As others inquired about morning sickness, I fought the often physical manifestation of having survived a trauma in identical ways – upset stomachs, tenseness, sleeplessness and nightmares.

I wasn’t sure that I would feel connected to my daughter and felt like this doomed me for motherhood. I prayed diligently on my own and with my pastors for this to change.

It was not until six months into my pregnancy that I shared openly with coworkers that I was expecting. I held off for so long in order to avoid the common questions (including those posed silently) that come with learning one is going to be a mother and then later, when one mothers a child.

“Who is the father?”

“Why isn’t he involved?”

“Whose eyes does she have?”

“Is her father tall?”

“Is that your temper she has?”

I dreamed of the man who raped me coming and taking my baby from me. In the labor and delivery room, I responded in fear as the doctor performed a routine examination in order to see how much my cervix was dilated. I kicked and screamed as his tools brushed my skin, forcing him to stop the procedure.

I convinced myself that once my daughter was born, it would be easy to separate the pain of the trauma and the emotions involved with mothering.

I promised myself I could separate my baby from the act of violence through which she was conceived. I wish I could tell you that 10 months into her life, it is as simple as sorting dirty laundry – the shame, the fear,  the unanswered questions of surviving rape, the everyday newness, the vulnerability, the not knowing how to raise another being at the same time. But, I would be lying. There are days when wrestling my daughter to change her diaper results in wrestling thoughts of unworthiness and hopelessness.

In the late nights and early mornings that blend into long day-after-day, exhaustion can give way to overwhelming emotions, bringing me back to the place of shame, sadness, failure, and the hopelessness I felt as a victim of sexual violence. Fear and uncertainty are there too. Am I good enough to be Zulema’s mother? Are things going to get easier? Why did this happen to me?

But then, I see how my daughter’s eyebrows have already memorized how to mimic mine at the most hilarious of times. I see her dimples reminding me that we are knit together with a thread that binds us to one another forever. When I feel her nose brush mine and her open-mouthed kiss on my cheek, I know she is not what happened to me.

As Zulema grows into her own person I too am growing into motherhood.

I am moving on. And even though my healing process began long before Zulema was born, there are parts about it that are only now beginning to make sense to me. It’s like navigating to a place away from home for the first time. Each time traveling to it thereafter feels quicker and more familiar.

Back when the healing began I remember day-after-heavy-day, sitting across from Paul, evaluating the rape, the rapist, and my entire life leading up to that moment there, in his office. We ventured through the hard times in high school when I felt alone, then breezed through my first experience of God’s grace; and settled for a while on the time I was a MVS volunteer, working with Latino youth in a very poor Westside neighborhood in San Antonio.

“Why did you ‘waste your time’ on those kids?” he probed, sarcastically.

I stared at Paul looking for clarification.

“They’re not going to amount to anything, right? Why did you spend time working with them when they’ll probably end up in jail or dropping out anyways? That’s what people think about them, isn’t it?”

What I didn’t know then was that Paul was pushing my buttons to reveal to me a core personal belief that I own each and every day. It has to do with my Jesus.

The most amazing thing about my Jesus is the company he keeps. Jesus was by my side in San Antonio, seeing more in “those kids”. I saw Jesus with me everyday in Ecuador where I did similar work. And even in the fogginess of mothering and moving on, I can discern that Jesus is with me now. When I feel like I have failed, sometimes multiple times between sun-up and sundown, still Jesus is there.

Something so undeniable about kids is their ability to, even in their constant movement, make time stand still and turn each moment into a gift. Zulema has exhibited this to me most recently as she nears walking – all on her own. She eagerly steps forward, reaching out for me and I cannot help but imagine what this foreshadows of her in future years.

“Before I know it, Zulema will be all on her own!” my mind exaggerates. And I start tallying up travels, extracurricular activities, and tuition as she grasps my shoulder and leans in for some love.

In ways I haven’t fully dissected, mothering is the perfect way to “move on”.

In Valerie Bridgeman’s poem, “Taking Back My Yesterdays”, she sums up the power this little individual has had in reshaping my experience in undeniable ways:

I now reclaim with force. The violence you used against me — that whirlwind that wrecked my life.

The violence I have turned to my own power.

I am here to take everything you kept:

Pieces of my soul,

Pieces of my heart,

Pieces of my destiny.

The future is ahead and I need them.

As Zulema takes her steps forward, I will be there with her, celebrating. I get to be there with her. And as we move forward together; my heart, my soul and my destiny are becoming mine again.