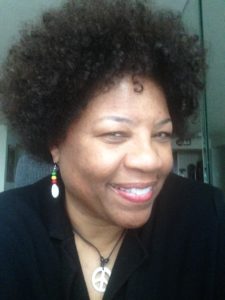 Calenthia S. Dowdy, Ph.D. is a Mennonite affiliate in Philadelphia. She’s on the faculty at Eastern University in St. Davids, Pennsylvania and serves as Director of Faith Initiatives at Philadelphia FIGHT, a Community Health Center that specializes in HIV/AIDS but serves all people regardless of their status. Calenthia was born and raised in Philadelphia and is a minister who brings an intersectional analysis of urban life, culture, race, gender and faith to her work. For the past 12 years, Calenthia has co-facilitated workshops on dismantling systemic oppression with the Damascus Road anti-racism analysis team.

A little over 20 years ago I was the campus chaplain and an instructor at the Philadelphia campus of Messiah College.

I met a young man who was not one of our students, but someone from the community. He was probably in his late 20s, had AIDS, and was apparently dying.

One day he sat casually in my little Philly campus, Broad Street office saying he’d just dropped in to say hello because he didn’t have friends and I seemed friendly. He was lonely. I remember being nervous because I wasn’t sure if he was contagious or not. I was uninformed about Acquired Immunodeficiency Syndrome (AIDS). I only knew what I had heard in the early 1980s, and that was that a lot of white gay men in New York City and San Francisco seemed to have it, and they usually died as a result.  However the young man sitting in my office was black and poor and living in Philadelphia. I don’t know if he was gay or not. I only know now that I wouldn’t see him again.  He ended up in the hospital soon after his visit … and he died. Where were his parents, his siblings, cousins, uncles and aunts? Where was his family? Where was his faith community? Who were his friends?

Flash forward more than 20 years and I find myself serving as the Director of Faith Initiatives at Philadelphia FIGHT, a community health center that specializes in HIV/AIDS.

I’m around people living with HIV/AIDS all the time and I’m no longer nervous because now I’m educated. I marvel at how God works sometimes. This was not a part of my plan, it was a door that opened; an offering to share faith, hope and healing with people, and I said yes. Faith is one of the ways that Philadelphia FIGHT helps its clients. Both science and faith are catalysts for deep healing. If people living with Human Immunodeficiency Virus (HIV) believe that their family, friends and faith community love and support them, they are more likely to adhere to their daily medicine regimen. Taking medication is not enough.

People have to believe that God and their faith community desire to see them alive and thriving. People with faith heal faster, and their T-cells increase in number.

After all that’s what HIV is all about, a compromised or deficient immune system. People don’t die from HIV or AIDS, they die from the diseases that attack their bodies because their immune systems are being torn apart by the HIV virus. Along with miraculous medication, science confirms that belief in a higher power, prayer, meditation, singing, faith meetings, laughter, hugs, touch, walking, all help repair the immune system and raise T-cell counts. Faith is healing.

Philadelphia is one of the cities in the United States with a high population of people with HIV/AIDS; more than 30,000 persons. At Philly FIGHT we tackle HIV with many tools; faith is one of them. I spread my urban Mennonite style of faith, sharing peace and justice as core parts of our faith. I do a lot of listening too. Science confirms that people begin to heal the moment they feel heard.

The most eye-opening reality in this work is that most of us don’t listen at all. It astounds me that we can’t give one another such a seemingly easy gift.

Our clients talk a lot, and they talk over one another. As if in a competition to be heard, some talk when I’m talking, or zone out when others are talking. I tried an exercise once where we had to sit in silence and listen to water running in a brook. Afterwards we were required to listen as each one shared. It was difficult. Several admitted to the difficulty of the exercise and said they realized that no one really likes to listen.

“I feel invisible because I have HIV.”

“I don’t feel valued because of my HIV.”

“No one wants to listen to a person who has AIDS.”

People who don’t feel heard will often respond in-kind, by not listening.

I encounter my second eye-opener in the bigger part of my work: outreach. I connect with the broader faith community with the goal of networking between FIGHT and local houses of faith. I also provide education to reduce stigma and misinformation around HIV/AIDS.

While there has been progress with the faith community’s acceptance and care for people living with HIV, there still remains deep ignorance and stigma – too much for 2015.

Many people of faith continue to associate HIV/AIDS with gay men, intravenous drug users and lascivious lifestyles, when in fact, the HIV virus is an equal opportunity attacker. People from all walks of life contract HIV. One of the fastest growing demographics is teenagers, ages 13-24.  Yet, it is often a struggle to get our houses of faith to care about HIV/AIDS. I think this lack of care is rooted fear; fear that it could be any of us; fear when we begin to think about our own bad choices, lack of judgement and hidden indiscretions. Any of us could come up positive with the virus that causes AIDS, but the good news is that it is no longer a death sentence and people are living full, productive lives with HIV/AIDS. That’s the hope that this Mennonite minister of healing shares daily in and around Philadelphia.

Science is amazing, and faith heals … even HIV.