Bigger than the memory of ourselves 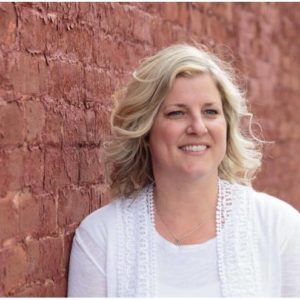 Chris Hoover Seidel is a spiritual director, Reiki practitioner, and director of Bridge of Hope Harrisonburg-Rockingham. She is a graduate of Lancaster Theological Seminary and attends Community Mennonite Church in Harrisonburg, Virginia, where she lives with her family. Her work, “Sophia at the Crossroads: Dismantling Patriarchy in the Church through the Biblical Goddess,” was published in January in I’ve got the power, a collection of essays based on presentations at the 2016 Women Doing Theology Conference hosted by Women in Leadership. To learn more about Chris’ work, visit www.soulence.space.

The morning I found the edited version of the Holding It(,) Together podcast, featuring my voice, in my inbox, I was at home in my pajamas. That is to say, it was not a high stakes moment. Yet, as I sat in front of the computer, I noticed a resistance to clicking the play button. Once I did, my whole body began to shake.

My body shakes when I have something powerful to say and I want to be heard. It starts down in my solar plexus and feels like a force rising up through me until I am able to voice it. My body also shakes when I’m triggered and need to release energy associated with trauma. Neither of these experiences is negative nor an unusual physical response to what I’m experiencing emotionally, but they are both rather intense.

On that particular morning, I was aware of both the power of my voice as well as the fear that my voice would fail me.

I know I am not alone. Most women who come for Reiki sessions struggle with their throat chakra. This is the center through which we exchange what is deep within us (ideas through words, our breath) with the outside world. This center is sacred, but for many women it’s been suppressed through silencing, belittling and co-opting, which contributes to self-doubt or reluctance to speak. Reiki contributes to flow and balance, to reclaiming voice, breath and power.

As I listened to the podcast, my body slowly began to relax. By the end, I felt like I had run a race; I felt both tired and energized. I name this because this is the work of listening to my body, as it channels wisdom that my mind hasn’t yet attempted to compartmentalize. I have found it to be one of my most valuable spiritual practices.

A week later I was visiting a friend, and I told her about the shaking when being confronted with my own voice. “What is that about?” I asked rhetorically, not expecting her to have a clear answer. However, my friend looked right at me without missing a beat, and with great clarity she said, “Chris, you are so much bigger than the memory of yourself.”  Her words landed in my heart, which felt like it was being split open to release something I didn’t know was still being held captive. Her voice speaking into my life was a game changer. I knew that this was an invitation to move beyond a place I had outgrown to embrace myself as a leader.

They recognize what is not working, not life-giving, and what is contributing to un-freedom. And many are engaging in the work of reclaiming their voices, their lived experiences and their agency. There is a shift happening, and instead of stumbling, women are finding their footing.

As I reflect on women reclaiming, my mind often goes to one of my favorite gospel stories — the story of the Syrophonecian woman. This is a woman who was marginalized due to her identity. Like many women in the bible, she is nameless, and in this case she is identified only as Syrophonecian or Canaanite. She was other — a Gentile. Jesus, whether we want to believe he was “testing” her or not, responded to her by reinforcing her marginalization. At first, he ignored her voice. His disciples wanted him to intervene, because her voice was too loud. At that point, Jesus makes an exclusionary statement; he was sent “only” to the lost sheep of the house of Israel. Nevertheless, she persisted. Jesus responded by using the slang term “dog” which was a known insult, comparable to calling her a “b****.” In doing so, he dehumanized her.

Then she challenged him. She pointed out that even dogs received more mercy than what she received from Jesus. She had to raise and reassert her voice just to be heard. That is neither an enjoyable nor an empowering experience. If this was Jesus acting as teacher, I question the pedagogy. This is the kind of experience that leads women to believe that they cannot voice their suffering and be taken seriously. The way I read this, Jesus was doing harm at that moment. I can feel it in my body. But when the woman pointed out that he was acting as oppressor, Jesus repented immediately. His behavior did a 180. He affirmed her and responded to her request. He reclaimed his own agency as healer.

Her voice, her persistence, her choosing to not play small, is what transformed the situation. It changed Jesus and it healed her daughter. Jesus called this “great faith.”

We can follow the example of this woman in claiming our voices and agency. And we can follow Jesus’ example of repentance when we are confronted with the way we embody the oppressor. As a white woman, I hold this story with complexity. I’ve been both the silenced and the silencer.  Therefore, one of my most valuable spiritual practices is to listen to the guiding wisdom of women of color.

I’ve reflected on Sojourner Truth and her speech “Ain’t I a Woman?” Her voice called attention to the enslavement of her body, voice and agency. She proclaimed that she had been heard by none but Jesus, but she also interrogated how the manhood of Christ was used to oppress women, even though Christ came to us by a woman. Sojourner Truth was speaking, in part, to toxic masculinity. She ended her speech by highlighting the strength of women and their power to turn the world back to the right place. “And now that they is asking to do it, the men better let them.”

The shift is not new, but it is making the world new.

In Alice Walker’s Absolute Trust in the Goodness of the Earth, there is a quote by Clarissa Pinkola Estés, which I keep returning to. I believe it speaks to what this shift is moving us toward.

Let’s admit it. We women are building a motherland; each with her own plot of soil eked from a night of dreams, a day of work. We are spreading this soil in larger and larger circles, slowly, slowly. One day it will be a continuous land, a resurrected land come back from the dead. Mundo de la madre, psychic motherworld, coexisting and coequal with all other worlds. This world is being made from our lives, our cries, our laughter, our bones. It is a world worth making, a world worth living in, a world in which there is a prevailing and decent wild sanity.