Home / Menno Snapshots / From the Amish Church to Somalia: An Interview with Bertha Beachy
Oct 09 2012

From the Amish Church to Somalia: An Interview with Bertha Beachy 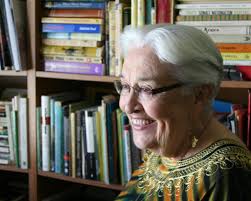 Bertha Beachy is a member of Assembly Mennonite Church and lives in Goshen, Ind.

What types of unique leadership do you bring to the Mennonite church and your community?

I have found that there are fewer spaces in the Mennonite Church for single woman who have lived a full life. I have felt that God has called me to be single, and because of that I was able to serve as a missionary for many years. Many resources in the Church are biased towards married or divorced women. I remember when I was visiting a male friend’s church, the church offered a single women’s Sunday school and a married people’s Sunday school. My friend looked at me and said, “You will probably want to go to the single women’s group.” I said to him, “If you don’t mind, I’d like to go with you!” So I went to the married group, and though I was the oldest and only single person, I identified more with the overseas experiences of three of the couples in the group.

Currently I participate in a prayer and small group at Assembly Mennonite Church (Goshen, Ind.), have been seeing a spiritual director for over 20 years, and teach Sunday School at Greencroft Retirement Community. I also care deeply about Islam.

Looking back on your life, were there certain events that encouraged you to pursue the leadership roles you have held?

I was born up in Kokomo, Ind., in an Amish family, and moved to Kalona, Iowa when I was nine years old. I had a very good teacher in the fourth grade. By the fifth grade, I knew that I would be a teacher someday.

In 1950, I attended the first Amish Mission Conference ever held, and it was there that I felt called to do missions. At the time, men returning from their assignments with Civilian Public Service during WWII were interested in missions. Russell Manaci, an Italian man in Michigan, had become a Mennonite and was interested in the Amish people. He helped to organize the three day conference in Kalona, Iowa. JD Graber, a missionary in India, invited everyone who felt called to missions to come forward for a prayer. There were lots of men—perhaps 25 that came forward—but I was the only woman. My mother’s Amish father was there and looked very pleased at my response.

After receiving my GED, I attended Eastern Mennonite University (Harrisonburg, Va.) as an Amish woman and studied Elementary Education and English. During a year where I stayed home and worked, I changed my membership to a Mennonite church before returning to college.

You went on to serve in Somalia for 25 years. How did you transition from feeling a call to serve, to actually doing missions?

My senior year at Eastern Mennonite University, my assigned roommate was Fae Miller, a nurse who happened to have returned from serving in Somalia. I went to Paul Kraybill, the executive secretary of the Mission Board, and told him I was interested in serving in Africa. He said, “Do you know Fae Miller? You should talk to her.” I did know her, because we were roommates! Paul told me that there was a teaching position open in Somalia. I decided to take it.

I graduated in June and sailed in September. My parents came to NYC to see me set sail. Over the years of my travel, my mother saved all of my letters. The transition was big, but I had been independent for quite some time so it was easier for me than for others. Growing up, I was a tomboy. I helped with hay making and cow milking. I was used to taking responsibility.

What were some challenging but enriching experiences from your time in Somalia?

I arrived in Somalia on September 27, 1958. I was told to go south to a school, instead of Mogadishu like the original plan. In those first months I went into the village every day, going into as many homes that invited me in as possible. This was the best thing I could have done. I built relationships so that when school started, people knew me and didn’t complain about a stranger for a teacher.

I also opened a bookstore in downtown Mogadishu. It felt like the whole Somali world went by and stopped in. Before starting the store, I signed an agreement that I would not sell anything counter Islamic. However, disagreement came when the Mission Council in Somalia put pressure on me to sell the Bible.  All of women agreed with me that it should not be done and it was dropped. I learned to speak up from my experience and my point of view. I learned that from my mother who always believed that things must be just.

How did you experience your identity within the Somali culture?

I was always allowed to be who I was. I have realized how similar the Amish and Somali cultures are. Both love children, respect age, share an oral tradition, and believe in open relationships that foster understanding and trust. My family grew up loving horses, and Somali people love camels.

After over 20 years in Africa it was also a challenge to become the manager of a Provident Bookstore. After fifteen years I retired and returned to Africa for five more years.

You have continued to work with Christian and Muslim relations here in the States. Many of us struggle with relating to “the other”. What have you learned in these “in-between” moments that would be an encouragement for people to bridge to those who differ from themselves?

Being in the “in-between” is enriching but sometimes complicated. My world view changed in Somalia and I was never the same. It is so important that we understand others, especially the Islamic world at this time. Borders between us sometimes deny our shared humanity.

Emily Kraybill is a senior social work major and Women Studies minor at Goshen College. She served as the Women in Leadership Intern for Mennonite Church USA in the summer of 2012.Each month this column of Equipping features input from a woman leader in Mennonite Church USA. The column is an initiative of the Women in Leadership Project. If you would like to learn more about the Project or get involved, please contact Joanna Shenk at joannas@mennoniteusa.org.