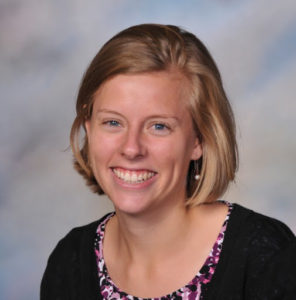 Elena Histand Stuckey is a math teacher at Eastern Mennonite School in Harrisonburg, Va., and a graduate of Goshen College

Growing up, I was not aware that math was a traditionally male field. To this day, I am thankful for the balanced mix of male and female teachers that taught me and a school atmosphere that led to such oddities as an AP Calculus class made up of about 14 girls and 2 boys. Math was not always easy for me, but it never crossed my mind that it had anything to do with my gender. These factors among others contributed to my decision to become a math teacher.

It is with my own experiences in mind and my understandings as a feminist that I come to the field of math education. Whether it is from negative past experiences, or differences in learning and communication styles, all too often female students can find themselves stifled by math. This is often termed “math anxiety” and while present across all demographics, certainly does manifest itself in higher numbers among females. Dealing with math anxiety can be as simple as building students’ confidence, not a false confidence, but a belief that with enough hard work they are capable.

The school where I teach, Eastern Mennonite (Harrisonburg, Va.), encourages math teachers to hold math lab each day after school. This is often one of my favorite times of the day because I am able to interact with students in a more one-on-one environment and work on helping them trust in their own math abilities. In reality, my work to build confidence among my female students really is just work to build confidence among all students.

I had two female math teachers in particular who serve as role models to me as I am continually figuring out this career path. With them in mind, I also seek to be a role model to my students, but in particular to my female students as a female in a STEM field (science, technology, engineering and mathematics). While women hold far more bachelor’s degrees than men, the percentage of women in STEM fields is disproportionately low. It’s been suggested that one reason for this is the lack of role models in STEM occupations.

Being a role model is far more than just my career choice, it is everything from the way that I dress to how I interact with both other students and my colleagues. Sometimes being a role model is showing students that I can be silly or that I have interests outside of the classroom. For me, being a role model is about being accessible and making a connection with students so that they want to model me. That is also a tremendous amount of pressure.

It is in the spirit of being a role model to my students that I seek to call out students on –isms (ie. racism, sexism, ableism) that they may not even know exist or just have never thought about. I try to do this in a non-confrontational matter, but with the understanding that this is not something I am willing to compromise on. With racist and ableist language, it is easier to be specific about what I find inappropriate. Students are also more likely to understand where I am coming from as parents and media make these issues much more visible.

Many of the sexist attitudes that I encounter are so normalized that it can be difficult for students to understand my point of view. This example is slightly silly, but it happened recently, so it is fresh in my mind. As students were listening to some music while they were working, one student thought that the music sounded like the Spiderman soundtrack and began narrating “…and here Spiderman is rescuing the girl from the bad guys…” I simply asked if boys ever needed to be rescued from bad guys and was told “No. That would be weird.” It was not a profound conversation, but if nothing else, I try to push them just a little bit to think.

I wish I could do more. At times I regret being in the field of mathematics because so rarely do issues of inequality naturally come up. I try to remind myself that being a female math teacher is important too. Ultimately, I do feel thankful for teaching in a school where students are so eager to learn, where I can express my Christian faith, and where wanting to make the world a better place one student at a time is an extension of that.