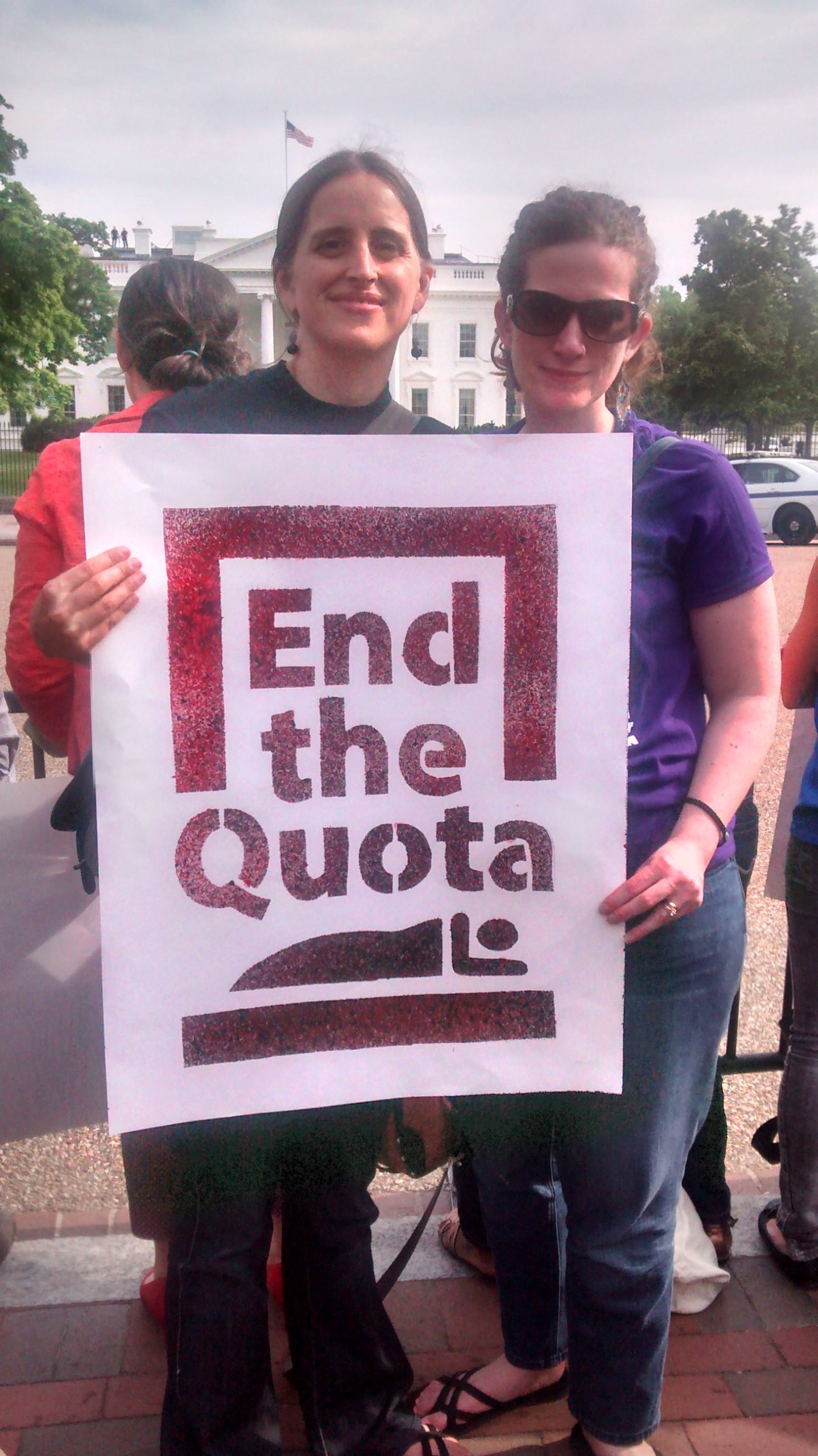 Lesley Ediger is a member of Atlanta Mennonite Fellowship in Atlanta, Ga. She is pictured on the left, along with Katie Beno Valencia who is also a part of El Refugio, in Lumpkin, Ga. Lesley attended the Detention Watch Network Conference with support from Mennonite Church USA.

34,000. This number may mean very little to most of us.  However, to immigrants and their loved ones, this number means a lot of suffering, as it is the number of immigrants mandated by law to be detained in the United States each day.

I have met several of these detained immigrantsat the Stewart Detention Center in South Georgia (Lumpkin, Ga.), the largest immigrant detention center in the country. “Juan Carlos” was one of the individuals whom I visited recently. He is a young Central American who fled from his home country after receiving threats on his life.

He had been in the wrong place at the wrong time and witnessed a gang murder. The gang then came after him, and fearing for his life, he made the difficult journey to the US where he thought he could seek asylum. Juan Carlos was apprehended at the Texas border and after a few weeks he was transferred to Stewart Detention Center to be imprisoned while he waited for a judge to hear his case.

At the facility, he was detained during his civil removal proceedings, but he felt like a prisoner, like he was doing time for a serious crime. As the days of his detention continued, his morale dropped and his spirit was destroyed. He told me once “We’re treated like dogs” and in my last visit with him, he said “I would rather go back and be killed than stay here any longer.”

A few weeks ago, I attended the Detention Watch Network conference in Arlington, Va. I went to learn from and collaborate with others in the coalition about how to end the 34,000 bed quota. This bed quota turns our brothers and sisters into a commodity.

Over half of the detention centers are run by for-profit corporations which make vast sums of money by detaining immigrants, which is paid for by our tax dollars. The people inside the facilities are fathers, mothers, sisters, and brothers. They are people with families to support and children to care for.

I went to the conference as a representative of El Refugio Ministry, a group of volunteers who run a program of visitation and hospitality at the Stewart Detention Center. I also received support from Mennonite Church USA to be a representative of ongoing immigrant justice work.

At El Refugio, week after week, our volunteers visit the people inside and hear stories of brokenness and suffering. Many of the individuals we visit are men who have been separated from their loved ones here in the United States and others are young men like Juan Carlos who have fled violence in their home countries and were apprehended at the border.

The people I’ve met have been in detention anywhere from two months to eight years. At a place like Stewart Detention Center, with limited access to affordable legal resources and limited recourse to stay in the U.S. legally complicated by complex immigration law, the majority of those detained there are eventually deported.

I became involved in this work because, as a Mennonite, I believe that serving my brothers and sisters is important. Visiting people in immigrant detention and offering hospitality to others who visit their detained loved ones is one small way that I can love my neighbors in the midst of a system that seeks to destroy and profit off of them.

Many of the others involved with El Refugio are also Mennonites, and it’s an important witness of faith that seeks to bring God’s kingdom into our everyday lives. Our visits help the individuals who are detained see that there are people in this country who care; people who oppose the system that is making them suffer.

There are detention centers throughout the country and many of them have volunteer visitation programs. El Refugio is part of a national network called CIVIC (Community Initiatives Visiting Immigrants in Confinement). If you’re interested in getting involved visiting our brothers and sister in detention, CIVIC can point you towards existing programs or help you start your own program at a facility near you. This is a small but meaningful way that we can show the love of God to people in need.