Participating in God’s hospitality at the Greyhound station! 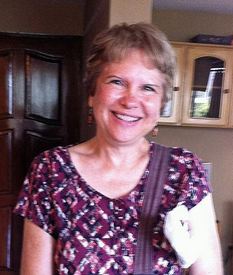 On most Tuesday evenings since last fall I could be found at the Greyhound Bus Station. It’s just off Interstate 10, close to downtown Tucson, and has amazingly been turned into a place of Kingdom hospitality.   I am involved with Casa Mariposa, an ecumenical local faith community that works for compassion and justice for migrants.

Ever since the Greyhound staff called Casa Mariposa for help one night last September when a large group of women and children from Guatemala were dropped off there by Border Patrol, Casa Mariposa has organized assistance every night of the week for these tired, traveling sisters and their children.

My congregation, Shalom Mennonite Fellowship, has given gifts of money, soup, diapers, and many other supplies for months now, as well as listened to the stories I tell. They are praying for the well-being of these weary travelers.

Thousands of women from Guatemala, Honduras, and El Salvador – or their family members already living in the U.S. – pay smugglers to transport them from their countries of origin to the U.S./Mexico borderlands.  When the smugglers get them across, these women and children are quickly apprehended by U.S. Border Patrol agents and placed in Border Patrol Detention for a few days of processing.

The women tell us of very cold air conditioning temperatures in the Border Patrol Detention Centers, of having their sweaters and jackets along with their other belongings taken from them, of sleeping on cold, hard floors, and of being given very little to eat.  By the time we meet them at the Greyhound bus station, we see exhausted faces, with eyes that tell stories of much suffering.  The children are sometimes feverish, always in need of a bath, and although they are disoriented, still able to smile and play as children do.

We lend them our cell phones to call their family members living in New York, Chicago, Cincinnati, North Carolina, Florida, Alabama…  and their family members, who haven’t seen them for years, find the money to buy them bus tickets.  We give them travel bags filled with water bottles, instant cups of soup, granola bars, diapers and wipes.  We bring rice and beans so they can have a warm meal before they leave.

We explain where they are, how their bus tickets work, and how many bus transfers they will have as they travel across the U.S.  We play with the children. If they need a place to spend the night we offer them one of our homes. We listen to the stories they choose to share with us – of violence, danger and extortion from gangs, and extreme poverty. If they ask why I am there offering help, I explain that I love Jesus, and that we are blessed by being with them for these few hours. And they smile, and say, yes, we are all part of God’s family.

In May, the numbers of women and children dropped off at our bus station rose sharply, as Border Patrol transported large numbers from Texas to Arizona.  We called in the media, to share more broadly what is going on.  At the same time, South Texas Border Patrol became overwhelmed with the thousands of unaccompanied children and youth from Honduras, Guatemala, and El Salvador, and a thousand of these children were transported to Nogales, where a warehouse at Border Patrol Headquarters was hastily fixed to accommodate them in a minimal way.

We are still looking for ways to support these children, who are held by Border Patrol until they can be transferred to shelters and later, perhaps to family members. The Tucson community responded with an outpouring of compassion to the needs of the women and children dropped off daily at the bus station, and now Catholic Community Services is coordinating this ministry.  And the women and the children keep coming.

Here is a link to the story as told in our local paper – a list of needed supplies and the address to send donations or checks is included in the article.