Black history and the connection to Anabaptist faith values 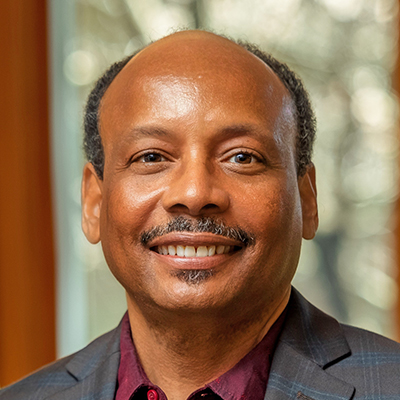 Daniel Grimes and his wife, Brenda, are both graduates of Eastern Mennonite University and reside in Goshen, Indiana, where they attend Berkey Avenue Mennonite Fellowship. They are the parents of four young adults, each of whom is a graduate of Goshen College. While at EMU, Daniel was the first Black student elected to the Student Senate. He is also the first Black person elected to the Goshen City Council and is the first Black person to serve as a vice president at Anabaptist Mennonite Biblical Seminary (AMBS), where he is the vice president for Advancement and Enrollment.

This blog is shared in honor of Black History Month (February).

I was born at the midpoint of the Montgomery bus boycott, which is often identified as the beginning of the modern U.S. civil rights movement. Thus, one could say that I am as old as the movement. However, the struggle for civil rights and recognition of the dignity of all of God’s children goes back much further than 1956. I stand on the shoulders of a multitude of individuals who sacrificed and persevered, so that I can have access to much more than many of my ancestors could have ever imagined.

I often tell people that my two primary identities are being Black and being Mennonite. Both identities have formed me into the person that I am today, and, although it may not be obvious to many, the two intersect in so many ways.

I was raised to not be afraid of being different — that our family was not like the other families on our block in Philadelphia. I was told that we were set apart for God’s work, so we shouldn’t necessarily behave the way that others do. That sense of nonconformity also meant that you didn’t just accept what others told you and the limits they may have placed upon you. My father actively participated in the civil rights movement and stood up for basic human rights as an act of not conforming to or accepting the rules that society had laid out. Similarly, the early Anabaptists refused to conform to the rules that their society had laid out for them. In both movements, nonconformity came at a price, but without their willingness to take risks and to “color outside the lines,” my life would be very different.

Economic opportunities for Americans of African descent have always been limited, and the civil rights movement sought to address the factors causing this inequality. My ancestors were enslaved for generations. Even after emancipation, opportunities to obtain any semblance of the American dream were extremely limited. As a result, a wealth gap has always existed. According to the Children’s Defense Fund, “in 2019, the median white family had almost eight times more wealth than the median Black family.”[i] The overall wealth gap in the U.S. continues to expand, and “the top 20 percent of households earn, on average, about 14 times more than households in the bottom 20 percent.” I find this to be a disturbing fact, since wars are often begun when the impoverished at the bottom of the economic scale revolt against the wealthy members at the top. Thus, for me, seeking ways to ensure economic justice is an imperative if I’m to live out my peace theology.

I believe that being a peacemaker in the U.S. includes keeping an eye on the structures of civil society and the government. Politics at times can get messy, but to be set apart for God’s kingdom work doesn’t mean that we are to ignore the power the state has to do both good and evil. My father didn’t march and protest in vain.  The laws in this country that nailed the doors shut for my ancestors were loosened for me to squeeze in by the power of the state.

Nonconformity to the world’s values and standing on the side of the marginalized isn’t always practiced by the church. When we feel too comfortable and secure, we’d rather avoid the risk of standing up for justice and remain in the comfort of following the patterns of the world. Afterall, nonconformity comes at a cost. For example, I am a graduate of Eastern Mennonite College (now University), but, in the 1940s, my mother, a plain-dressing farmer’s daughter from rural Lancaster, Pennsylvania, was unable to attend due to the color of her skin. She attended Goshen College instead, but her time there was not without incident. Also, in many conservative Mennonite circles, Martin Luther King, Jr., was viewed as a troublemaker. Although there are some notable exceptions, to a large extent the Mennonite Church ignored the civil rights movement even though, at its core, it was grounded in the Christian theology of peace – not violence. What would have happened if the Mennonite Church had recognized how closely the values articulated by MLK and others lined up with Anabaptist theology and had embraced the movement? What if MLK’s quote stating that “those who love peace must learn to organize as effectively as those who love war” had been followed?

My Anabaptist values help ground me in being able to work for peace and justice from a deeply rooted biblical perspective. This has allowed me to enter spaces formerly closed to people like me and provided me with the freedom to color outside the lines and to not always feel like I need to conform to the ways of the world. May that sense of nonconformity free us all to act and to act boldly.