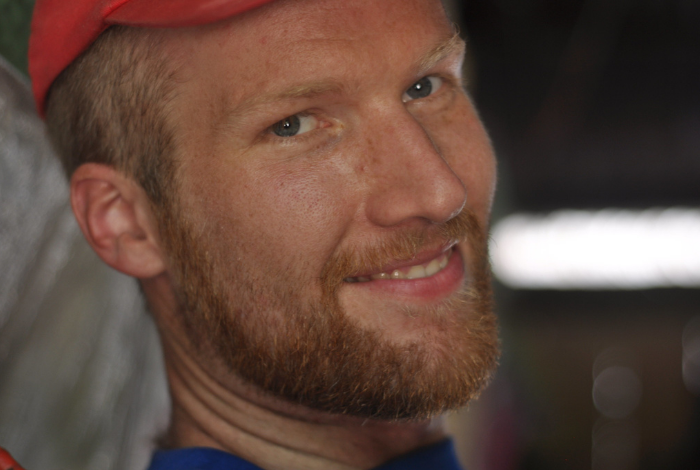 Tim Nafziger (he/him) is a Mennonite organizer who lives in the Ventura River watershed on the traditional lands of the Chumash people in southern California. He works as a digital consultant, web developer, writer and photographer. He geeks out on board games, science fiction, deep conversations and facilitating meetings. Tim also thrives on cross-pollination, relationship building and small teams working for social change.

On May 22, 1999, I was standing just outside the gates of Grissom Air Force Base in northern Indiana. The sinister shape of a stealth bomber broke through the clouds above my head. It was the christening of the Northrop Grumman’s 20th new B2 bomber as the “Spirit of Indiana.” I was gathered with a group of peacemakers convened by Cliff and Arlene Kindy, two farmers who lived down the road. Together we offered a witness against the celebration of this machine that would shortly be killing people around the world as part of the “power projection” plans of the U.S. military.

That day Cliff spent quite a while talking with the military police at the gate. He had a card table under one arm and was enthusiastically describing to the guards why he wanted to set up a B2 bomber buyback program inside the gates. The military police were not convinced that they were ready to turn in their bomber yet, but Cliff was happy to tell them all the great education and health programs that he could offer them if they turned in their B2. He probably spent an hour evangelizing those MP’s with our vision for ending militarism.

When we look at something as vast as the military-industrial complex, it can be daunting in the face of so much political and economic power. And on top of all that, we have to grapple with the stories that our culture tells itself that glorify war. As Glen Guyton points out, “Endless war has been somewhat normalized, and patriotism has become synonymous with unquestioned support of the military, thanks to the NFL and most other sports activities.”

Any one of us will never be able to push back against this leviathan by ourselves, but as other writers in this Cost of War series have pointed out, we can build communities of resistance. That requires strategy and structure, but also a third ingredient that I want to focus on: stories.

On that May day many years ago, I caught a story from Cliff and Arlene that I had been learning for a year from them and others in our Christian Peacemaker Teams (CPT) northern Indiana regional group. I learned that I had a place in a community.

Our little band was creatively upending the story of military glorification that everyone else at that ceremony was buying into.

Together we defied the logic of the police officers at the gate.

Cliff and Arlene are two peacemakers and farmers who have wrapped the whole of their lives together around this story of peacemaking. Cliff recently published “Resurrection Peacemaking: Plowsharing the Tools of War: Thirty Years with Christian Peacemaker Teams.” In it he shares what the nitty gritty work of nonviolent direct action looks like, from brainstorming actions to hiking across the bombed out island of Vieques, Puerto Rico.

Peacemaking stories come alive when we allow them to shape us. For me that has taken the form of 20 years of involvement with CPT. Over the decades I’ve seen the power of teams built around a story of resistance that is ever evolving in conversation with peacemaking partners around the world. Like Cliff and Arlene, my peacemaking journey has taken me from a beach in Colombia to a camp of water protectors on the Standing Rock reservation.

Cliff’s book took me back to where that story began for me, just down the road from my parent’s home in Goshen, Indiana. It began over meals at Cliff and Arlene’s house: a converted corn crib amidst the many acres of their vegetable garden. It began holding signs and candles in peace vigils that taught me a different song.

Again and again over the years I’ve returned to Cliff and Arlene’s farm because they taught me the power of giving over your life to the courageous, vulnerable and improbable story of peace.

I learned from them that this life could be lived with a smile and a twinkle in your eye. Their audacity stirred something in me when I was a teenager that knocked me off the conventional path. I have never looked back.

What does that joyful audacity look like for you? What community are you gathering together to defy the logic of militarism? What is the improbable story of hope and justice that you are telling together?