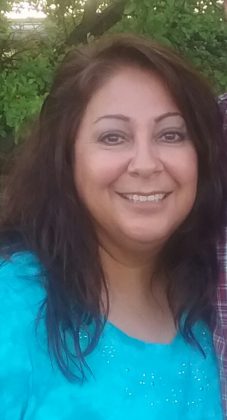 Yvonne Diaz is a member of Mennonite Church USA Executive Board. This post originally appeared on TheMennonite.org as part of its Seven Questions series. Seven question interviews are compiled by Hannah Heinzekehr.

1. What is your earliest memory of church?

My parents were members of Iglesia del Calvario (Calvary Mennonite Church) in Mathis, Texas. The first few years of my life that’s where I went to church. Some of my earliest memories are of people that were there and were a part of my life until now, like Paul and Ann Conrad, who started out as VSers [Voluntary Service participants] there and now live in Ohio. Seferina (Seffie) de Leon also grew up in that church.

I went to the Mennonite kindergarten there. I remember Seffie singing in church and then Sunday school. Paul Conrad was an avid photographer so he has all these slides of my family and my extended family members. All of my grandparents, aunts and uncles and cousins all went to that church.

2. You’ve worked for a variety of Mennonite organizations. What are some of the roles you’ve played?

I worked for Mennonite Central Committee Great Lakes as Executive Director and then I worked for Iglesia Menonita Hispana.

I learned a lot from each one of these roles. I think my favorite part about working for all of them was being fully involved in the church in some way and being involved with church people. That’s what I really liked about being a part of any one of these organizations. I don’t’ think I could name a favorite. They were all just different in their own way.

3. In each of your roles and today on the board, you’ve been an advocate for anti-racism work in the church. What has that experience been like?

Sometimes it seems like there is movement and you get excited about what you see happening and then it’s like one step forward, three steps back unfortunately. I’ve seen some progress, but there is just so much more work. It’s been — at times — very, very frustrating. But there’s also been progress, especially with board appointments. It just kind of ebbs and flows that there is more representation of people of color. Sometimes committees or roles swing back to being all white committees and you ask yourself, Really, we’re back there again?

There have been many times that people have asked me, based on experiences I’ve shared or things they have seen that have happened to me or people of color within the church, “Why do you stay with the Mennonite church?” If I would have based me staying with the Mennonite church on those experiences or the people that participated in that discrimination or racism, I would have left the church a long, long time ago. A lot of people have left, because of the experiences. The only reason I stay is because I truly believe in Anabaptism. I grew up in this church, it’s been my church and I’m not going anywhere. The doctrine and theology is very sound and that’s the reason I stay. And I think it’s the reason many people of color stay.

4. You have both an engineering and a business background. How have these fields of study served you well in church work and beyond?

I’m analytical by nature. It’s helped me with being able to see structures and how things work and being able to put the pieces together. It’s helped with knowing how to research and make a decision and trying not to be afraid to experiment with different things to see what works.

And just where I’m living now, in West Texas, the backgrounds have helped me in being able to live like I do. Building stuff from scratch, figuring things out as far as solar energy and water and building a greenhouse and all of those kinds of things.

I was in engineering/construction first and then I spent 20 years working in nonprofits. As an engineer, I built shopping malls and fish hatcheries. My dad was a contractor and so I learned concrete and brickwork early on as a child. I grew up around all of my cousins and uncles who were in construction.

5. You mentioned this a little bit, but you made an intentional choice to live in West Texas and to try to live very environmentally and off the grid. Can you talk about what pulled you here and talk a little bit about your house?

I was born not too far from West Texas in New Mexico. I like to say that the desert is in my blood. I like the desert and I like the Southwest. And being able to live off the grid. It would scare a lot of people, but to me that sounded very challenging and like something that I wanted to do. I want my carbon footprint to be as little as possible and to be in as natural an environment as possible.

In West Texas you can do it. There’s very little disturbance of the land and you live off of it. We have a huge greenhouse. And some of the other stuff we just trade with neighbors. We just barter. We’ll provide this service and we get eggs.

We do buy our meat. There is a local person there that grows his own cows and we have gotten sides of beef and every once in a while somebody will have a goat. We try to survive without having to go the store, but every once in a while we do want an ice cream treat and I’m not going all the way to making my own butter and cheese! But we make our own bread and grow all the greens we need.

6. Iglesia Menonita Hispana (IMH) has done a lot of planning for their next meeting taking place this summer in Orlando. What is most exciting for you right now about these plans?

I think the involvement of new people that have been able to step into some of the leadership roles for IMH. That’s exciting. New and younger people are getting involved.

And everybody knows that IMH is not the same. We’re going to have to think about the future and think about the future of Latino people, just in general here in the United States. That minority is growing and getting to be a big block and with the evangelical nature of Latino Mennonites in general, that’s pretty exciting to think about, the potential for reaching out to the Latinos in the various places that we are.

7. What made you say yes to the invitation to serve on the Executive Board and what are your hopes for this summer’s assembly in Orlando?

It was IMH that selected me to serve on the Executive Board. We are allowed a representative. We knew that that position was open. IMH said, “Ok, can you do this?” And I said ok!

I guess I’ve been around so many of the people on the board and I knew them and the structures. Having spent time working for Mennonite agencies, there wasn’t anything very surprising.

In Orlando, I’m hoping that with us being all together we can really dream radically big. It just seems like we are at a point where we have to think differently about church. Can we be creative enough and not be afraid to just think about being a part of this church that’s bigger than any one person?

And I think we keep asking the same questions of how can we be community with people changing, agencies changing, and still have that constant of Jesus as central to our lives. We can be very, very creative with coming up with something radically different. I guess I just don’t want people to be afraid to step out of their comfort zone. I want us to just be able to be that church that we need to be for the future.

It doesn’t matter the numbers of members and it doesn’t matter what we have now or what’s been in the past. We need to carry on with the good things that are happening and keep building on that. We have the capacity to be creative, so let’s not be afraid to do that.

8. What would your perfect vacation be?

Our 10th anniversary is coming up. We were watching this show that was showing Hawaii and we were talking about whether we want to visit Hawaii. But there are other options too! Right now I’d have to say it’s a toss-up between Hawaii and Chile. I think Chile is winning.