The Climate Ride is put on by the Center for Sustainable Climate Solutions to help bring awareness surrounding climate issues and climate justice. Riders begin their 3737 mile journey in Seattle, Washington, May 31. They will ride their bicycles across the country over the course of the following two months, concluding their ride in Washington, D.C., July 28. Along the way, they will stop at various churches to and hold Community Townhalls, where they will discuss climate issues with local communities, and via livestream.

This reflection was first published on the Center for Sustainable Climate Solutions Climate Ride website, here. Reprinted with permission. 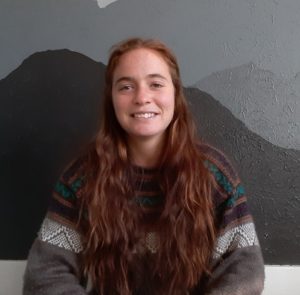 Sierra Ross Richer is the written communication intern for the Climate Ride. She is a  junior journalism major at Goshen (Indiana) College. Sierra works for the campus newspaper at Goshen College and is also an intern at the Anabaptist World magazine.  When she isn’t writing, Sierra likes to cook, go on adventures outdoors, garden and, more recently, slackline and hacky sack.  Sierra calls Goshen, Indiana, home, but she has also lived in California, Peru and Ecuador with her family.

I was on a bike ride one Saturday this spring, when the animated voice that had been directing my route became suspiciously quiet.  I pulled over and grabbed my phone to see what was going on.  Black.

I was two hours from my house and at least another hour from my destination; where I was at the moment was on a dirt road by a lake. That was all I knew.

You could say I was lost. But after months of cycling in the countryside of northern Indiana, that prospect didn’t scare me as much as it used to.  Riding is helping me become more comfortable on the land and helping me become less lost in another way, too. The second kind of “lost” is the condition of being disconnected from the natural world, and it can block people from taking action against the climate crisis.

After a break for a Cliff Bar and some black coffee, I got back on my bike.  I knew which direction I had come from and which direction I needed to go.  Most importantly, I didn’t feel lost, so I decided to keep going.

I’m not talking about being in your backyard, or at a park, or even on a developed hiking trail.  I’m talking about being out on the landscape, in the undeveloped spaces between buildings and parks and cities.  These places make many of us uncomfortable, and that, I think, is a problem.

The roads of Elkhart County, where I’ve been doing most of my training for the Climate Ride, offer plenty of things for a biker to worry about.  In addition to getting lost, there are the barking dogs, storm clouds and pickup trucks that rev their engines as they pass. These are all valid things to be wary of.  But I don’t think they totally account for the feeling of unease that I used to feel when I first started biking. The real culprit was that I simply wasn’t familiar with the countryside.

The anxious, panicky feeling we get when we’re in a situation or a place that we’re not familiar with is probably a helpful defense mechanism, but when it’s connected to being outdoors, that feeling can be part of a cycle that makes us avoid undeveloped spaces more and more.

In a system where so much land is privately owned, we are constantly being reminded to stay on the trail and off the private property. This phenomenon, combined with a fear of the many potential dangers “out there,” makes for a society that spends very little time on the land in its natural state. It creates a society that feels lost in what should be our own home.

There’s a saying that says you can’t love what you don’t know. And when it comes to the climate crisis, not loving this planet is about the most dangerous thing we can do.  If we are going to take care of the planet and learn to live within its limits (which we will have to do if we are going to survive the climate crisis), we will need to learn to live in community with all of the other organisms that also inhabit it. That can’t happen unless we feel comfortable in nature.

As I pedaled through the country that Saturday morning, along dirt roads and paved roads, by lakes and woods, barren corn fields and farm houses, I was reminded of the poem “Lost” by David Wagoner.

“Stand still,” the poem begins. “The trees ahead and bushes beside you are not lost. Wherever you are is called Here.”

At that moment, Wagoner’s words felt true.  I didn’t know where I was, but I was definitely somewhere, and it felt good to be there.

Wagoner’s argument seems to imply that we can never be lost, because we are always somewhere.  But later in the poem, he reveals that there is a way that humans can be lost: “If what a tree or a bush does is lost on you,” he writes, “you are surely lost.”

It’s that second type of “lost” that should terrify us way more than the first one. It’s a condition that threatens both us and the future of the entire planet. And it’s a condition that many, many Americans, even those who think of ourselves “outdoorsy,” are affected by.

For me, biking has become a way to face my fear of physically getting lost and become more comfortable out on the land.  Through my biking, I’m realizing that the country isn’t as forbidding as it sometimes feels.  The feeling of “lost” I experience probably has more to do with my unfamiliarity with the area than the actual hazards, and the only way to overcome that feeling is to spend more time out on the land.

“Stand still,” Wagoner advises at the end of his poem. “The forest knows where you are. You must let it find you.”

Keep up on Climate Ride events and join Community Townhalls