Oral History: How are we the people of God together?

This post is part of a series from the MC USA Archives Oral History Project that seeks to document and preserve the voices of young people, ages 24-40, who are part of MC USA. The excerpts below are from an informal, longer spoken interview and edited for clarity. Interviewees did not receive the questions beforehand and responses were spontaneous. The interviewer was Eva Lap. Full recordings are available in the MC USA archives. 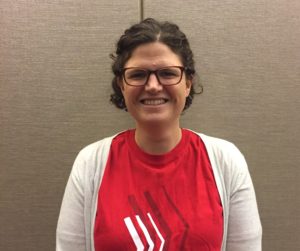 Moriah Hurst is a pastor at Parkview Mennonite Church in Harrisonburg, Virginia. She previously served with Mennonite Mission Network in Australia and is a graduate of Anabaptist Mennonite Biblical Seminary and Goshen College.

Eva: As you had many experiences moving while growing up, did you ever feel like you found a home church, or a church that formed you the most?

Moriah: When I got to college and started attending Assembly Mennonite, not only was it wanting to be baptized and make this kind of lifelong commitment, but also, this is a body that I can commit to. These are a group of people while still flawed… Karl Shelly is one of the pastors there, and still is. And he used to talk about it as, hopefully people will look at us, this group of Christians, and say, “What a motley crew, but see how they love each other.”

So feeling like there was an authenticity and an approach to faith and life there that I could say yes to.  So I knew that baptism was both the personal commitment but also the commitment to a community and to a wider body of faith. And so that was the first time where I could really commit to a church. Even though I am deeply Mennonite within my theology, that was the congregation that I felt like I could commit to.

I was baptized there, later interned there in seminary, and then eventually came back to them and they ordained me. So, even though I have not attended there regularly since I was in seminary, that is one of my home churches. So there was not a [single] congregation that formed me; it’s been lots along the way.

Eva: Where do you see MC USA or Anabaptism moving in the future? What would your hope be?

Moriah: My hope would be in the same way that I talked about when I joined Assembly Mennonite and Karl said that if people are looking in from the outside, they can say, “What a motley crew and look how they love each other.”

I’m leading a congregation that holds a fairly broad theological perspective and that is a hard place to be as a leader, and in the church now. So my hopes would be that… my hopes would be that we have more spaces for those voices that have not been given space — so young people, and women, and a diversity within racial groups and cultural groups and ability levels, and, yes, sexual orientations as part of that too. But that we also don’t have to be so wrapped up in some of those identities.

How are we the people of God together in an Anabaptist understanding of what it means to act out our faith in this world?

And that is hard. So I do not envy leadership in MC USA at all. And so it is one of these spaces where some of my friends in Australia joked that I needed to come back to the U.S. to be a part of my church here because they needed me [chuckles]. But also realizing I am very called to think globally, act locally.

For me, it’s: how am I empowering young people and calling them into leadership where I am? And how am I fighting the system around me that calls me young even though I am almost 40? And part of why they call me young is that there should be 20 years of people who are behind me leading, and they are not there in pastoral ministry, and so I am a young pastor, even though I have been pastoring for 15 years! [laughs]

So how are we nurturing the next generation while still valuing those who can mentor us in this?

But our world is changing around us and not that it needs to, that we need to change to it, but actually we need to keep figuring out how do we articulate and be people of faith while this is all going on.