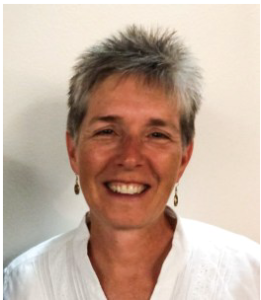 Cynthia Lapphas been the pastor at Hyattsville Mennonite Church, which is located right outside Washington, D.C., for almost 20 years. She has degrees in music from Eastern Mennonite University, in Harrisonburg, Virginia, and theology from Wesley Theological Seminary, in Washington, D.C. Her education has been augmented by 30 years of marriage to Eric Stoltzfus, raising three (now adult) children and seven years working at Women’s Alliance for Theology, Ethics and Ritual (WATER). She is still learning to be anti-racist and contemplative.

In September 2015, I was privileged to be part of a weeklong Mennonite Central Committee (MCC) sponsored learning tour, “Pipeline to Prison.” We toured prisons and immigration detention sites, met with formerly incarcerated people, and learned about for-profit prisons and the history of policing and prisons in this country. At the end of the week, we wondered together what the next steps were and how we would each use our new knowledge and experiences for justice.

Less than a year later, I was invited to a clergy luncheon with the local mayor. I was surprised to see the police chief there, along with a number of other officers. It turns out that the chief had an agenda. He was taking seriously the recommendations from the 21st century policing task force that then President Obama had created. At the luncheon, the chief gave an open-ended invitation to the clergy to continue the conversation about how we might work together.

While my experience with the Learning Tour made me a bit more open to this invitation than I might have been, I still hoped my congregation would say, “Mennonites don’t work with police. That is too much like participating in the military, and we are a historic peace church. We don’t do that.” Instead, the congregation was supportive and curious about what might develop.

I wondered what would happen if, instead of protesting the police, I got to know them. Was there any way this could be an avenue toward justice and peacemaking?

Soon, four faith leaders began meeting with the police chief each month. As we talked with the chief, I naively offered to lead interested officers in deep breathing exercises and meditation once per month. The chief smiled benignly and said he appreciated the offer, but “the officers have too many in-service hours to fulfill already.” We didn’t have written formal objectives as we met with the chief, but we began getting to know each other and hearing about the community, from the perspectives of police and clergy. The chief would tell us about hot spots of violence or arrests. Clergy would tell the police what social service resources were available in the community and bring some cultural perspectives that might be overlooked.

The chief thought we needed some kind of uniform or identifying clothing. I was squeamish about anything that said “police chaplain.” I wanted to be a voice for the community, from the community. I requested a dove, instead of a cross, on our police issued windbreakers, which eventually had “Hyattsville Community Chaplain” printed on the back.

If mediation wasn’t possible, I still hoped that maybe the chaplains could have some small influence on the officers — that we could prevent the kind of horrific police shootings that we hear about almost daily.

One very hot day in the COVID-19 summer of 2020, I received a call from dispatch to come to the food court at the local mall. There were cop cars everywhere. I walked in and found a cop I recognized. He explained that a man had threatened someone at one of the food counters, and when they asked him to leave, he refused. Now he was sitting quietly, refusing to talk, holding a knife, while the cops tried to keep him out of view.

A series of cops tried to talk with the man. It soon became clear that the white cops only made the African American man more angry. He wouldn’t speak, but he began to communicate by writing on slips of paper. He refused a conversation with a chaplain — I think the police were relieved; they don’t like “civilians” to get too close in unpredictable situations. The county crisis intervention team was called, but they took almost 2 hours to arrive.

It could’ve become a very volatile scene. I admired how the police were patient, watchful, not in a hurry and interacting with other people in the mall. And I knew why they were not eager to engage more quickly or more forcefully. Less than a year earlier, this same department was involved in a tragic police shooting.

One September morning, during the middle of rush hour, a man walked down the middle of a busy road, a knife in each hand, while children waited for school buses and heavy traffic drove by. He shouted erratically, clearly in crisis. Multiple police departments responded to the scene. Over the course of an hour, they followed police protocol for de-escalation, using pepper spray, tasers and shooting the man with a beanbag gun. They tried to establish a conversation, all while pointing guns at him. They used a “flash-bang” to disorient him, and then, he started toward one of the cops, knives in hand. Nine cops discharged their guns, with bullets flying into nearby apartment buildings and businesses. The man was killed in the middle of the intersection. It was traumatizing for onlookers, family and police.

I heard about the incident an hour after the shooting. This was the very thing I had been dreading in my relationship with the police. My first thought was to wonder where the protests would be, so I could join them. Instead, I decided to use my police department badge to see what was happening. I parked at a distance and walked until I found some officers that I recognized and asked them how they were doing. While they couldn’t tell me anything about the shooting, I could tell they were upset; this was not the outcome that anyone wanted. They seemed to appreciate that a chaplain came to talk with them. Eventually, I found my way to the press briefing. As the chief spoke, I watched and prayed for the man who was killed. When the briefing was over, I requested — and was granted — permission to enter the intersection where the shooting happened, so that I could pray. I felt conflicted being there.

Was I supporting the police, whose actions horrified me? Was I, a community member, keeping an eye on the police?

I often wonder if the chaplaincy program makes any difference in the small town of Hyattsville, Maryland, for the community or for the police. Certainly, things have changed in the police department over the past six years. Policies have been updated, salaries have increased, and there is more diversity — among officers and chaplains. It is safer for LGBTQ officers to be out. A woman was hired to work on mental health and crisis intervention — providing sessions for meditation! The department got a federal grant that requires all Hyattsville police officers and dispatchers to have quarterly mental wellness check-ins. Nine months into the program, data has yet to be gathered to see if it is making a difference in how cops do their jobs and interact with the community. Anecdotally, the officers and dispatchers find it helpful. Will this program make a difference in preventing police shootings of civilians or police suicides?

We have only observed the impact that the community chaplains make for the department and the community. We observe that, through three new chiefs, each one has wanted to keep the chaplains on board. The chaplains have been called upon in difficult and tense situations to bring compassion and calm. We have been consulted and trusted when families lost loved ones to illness, stroke, overdose and suicide.

Certainly, I have been changed. My suspicion of police is still with me, but I can sometimes see through the uniform to the person. I’ve seen firsthand that policing in this country is a dangerous mess — and some of the individuals are well intentioned. I see that a lot of the training is militarized — and some is humanizing. Peacemaking — and policing — are complicated, risky endeavors.

If you or your congregation is interested in using a guided curriculum to reflect on what it means to engage the forces of state, commitment to non-violence and how to act to end policing and police brutality, see MC USA’s Abolition curriculum, titled “Defund the Police? An Abolition Curriculum.”