Reclaiming Christianity on the Margins 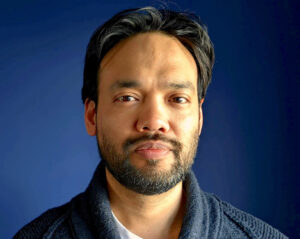 Rohadi Nagassar is a thought leader on building diverse organizations and communities, church planting, and decolonizing and deconstructing Christianity. He lives in Canada, on Treaty 7 Lands, otherwise known as Calgary. He holds a Bachelor of Arts in economics from the University of Calgary and a Master of Divinity from Canadian Theological Seminary. His experience includes non-profit work in both governance and organizational development. He is the past-chair of one of the largest anti-human trafficking Non-Governmental Organizations in Canada, and a director with Mosaic Ministries. Rohadi’s private sector experience includes running his marketing consultancy firm for over 20 years. Rohadi’s latest book, “When We Belong. Reclaiming Christianity on the Margins,” from Herald Press, is the MennoMedia CommonRead from October-December.

A later addition to my book, “When We Belong. Reclaiming Christianity on the Margins,” was a topic called “deconstruction.” Have you heard of this term before? Deconstruction is not new. It’s work that should be familiar to most Christian traditions. It involves trying to make sense of one’s faith within a modern context. Although church institutions are designed to resist change, particularly when it comes to interrogating their own malformed power structures, every new generation has a role in contextualizing Christianity for specific time, place and space. It’s, therefore, deeply incarnational to translate the gospel into a modern vernacular.

But there’s something particular about the current version of “deconstruction” that’s worth pinpointing. It has to do with the primary catalysts.

Many are at odds with their faith because of harms they, or ones they love, have suffered by the church — that is, from the people within, the institution itself, or both. The range of harms are wide and widespread, from spiritual or sexual abuse scandals, patriarchy preventing women from leading, intentional exclusion of LGBTQ2+S folks, racialized segregation and so forth. It doesn’t help that, in many traditions birthed in Western Christendom, there exists both explicit and implicit demands to assimilate to a specific gaze. In our context, the gaze is built to match the cis-gendered white male. How he thinks, looks, acts, often votes, earns and so forth dictate standards, norms and beliefs within dominant church traditions — and society, for that matter, too. If this is not evident to the reader, then it’s plausible they are either working well to assimilate to the dominant culture, or culture is built to center them. However, marginalized people — -those pushed to the outskirts by that gaze — know “something ain’t right.” The list of what “ain’t right” is the catalyst to explore deconstructing.

When your body or beliefs do not fit the typical church cultural norm and you choose not to assimilate, belonging is out of reach. (I am casting a wide net using the term ‘church’ generically to refer to virtually every tradition rooted in white European or American hegemony.) Something or someone is continuously working against folks pushed to the margins, preventing them from finding full belonging and ultimately wholeness in community as well. Naming the root powers that perpetuate marginalization in the church is crucial. I spend two chapters discussing what I think are the bedrock elements producing barriers: white supremacy and patriarchy.

Once again, it’s hard to process the bedrock malformed powers influencing day-to-day church activities if you don’t experience them in action. And once again, what is unseen may be indicative that the coveted feature in most churches — communities dominated by “sameness” — is matching your comfort level. A simple litmus test to expose hidden features is to do a quick scan of your community. Chances are your church is like most others — dominated by sameness. Folks who look, think, act, live, vote and perhaps earn the same. Although there are exceptions, most churches are, for example, racially segregated. Some may be affirming, but many are not. Most do not include disabled folks as part of the diverse body either. Folks on the margins are intentionally excluded by design, and more and more Christians are taking notice that there’s a disconnect between the teachings of Jesus and how the church functions in the neighborhood. And it’s not only those pushed to the margins who are questioning their faith. The number of our children leaving the church as adults, never to return, should be an obvious tell that everything is not alright on the inside, and it hasn’t been for decades.

When I started to question why I could never fully belong in the faith tradition I grew up in  — which I would now describe as white evangelicalism — the term deconstruction wasn’t used, although the journey was the same. I sought to interrogate my Christian formation through a lens that asked two questions: Is what I believe worth keeping/reclaiming? Or does it bring harm to those on the margins and, therefore, should be discarded? This might include the ideas surrounding theology — let’s say the validity of Christian nationalism, militarism or same-gendered marriage; aspects pertaining to identity —affirming community, racialized segregation, gender barriers to leadership; or outright abuse — leadership, sexual, spiritual.

I have left out one notable pathway that deconstruction might lead to: the exit. Leaving the faith makes perfect sense when one is escaping harm. It’s a viable option, despite pleas from within the institutional hierarchy to decry a “danger” of deconstruction — ultimate deconversion. The weakness behind church leaders casting doubt on deconstruction is the deflection from the source: The problems are coming from inside the institution.

Church leaders need not worry about the movement behind deconstruction, rather they must focus on what is causing the exodus in the first place. Diagnosing and treating the systems that perpetuate harm to those on the margins should be the focus, not casting blanket suspicion on a movement reacting to internal hypocrisy.

It’s also simplistic to conclude that deconstruction must lead to giving up the faith. I certainly argue for the opposite in my book. I believe there are healthy and viable Christian traditions worthy of being reclaimed. I make this claim, because Christianity has a specific “DNA” that opposes empire thinking and power grabs — something many contemporary churches find themselves gleefully intertwined with it. But our “DNA” is rooted in the hope that God has for creation — to put the world to rights, as we chase our collective liberation, fullness of life and belonging in the unfolding kingdom in our midst.

Deconstruction is a pathway that can mimic Jesus when he proclaimed, “You have heard it said …” and followed it up with, “And I say to you ….” In this manner, we can embody the path Jesus places in front of us by living out his teachings, like the “last shall be first” and the radical teachings of love for neighbor, enemy and self.

Deconstruction is a bid to reclaim a faith that gives everyone, specifically folks who have been marginalized by dominant cultural assumptions, a chance to fully belong in their own skin and flourish. In practice, this takes place when those pushed to the margins are centered in a renewed organization of church, bent on reclaiming its original vocation of love, justice, beauty and hope.