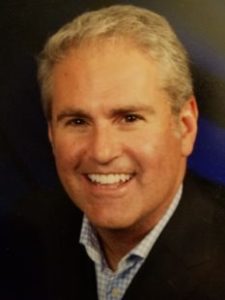 Jim Caskey is a member of Mennonite Church USA Executive Board. This post originally appeared on TheMennonite.org as part of its Seven Questions series. Seven question interviews are compiled by Hannah Heinzekehr.

1. Do you remember having a favorite Bible story as a kid and why did you like that particular story?

2. Tell me about your congregation. What’s unique about it and why do you attend there?

When we moved to Goshen, we came from a small church where we were very involved. When we came up here, we were so delighted by the big church feel and with many other people pitching in to do things, including caring for our children. One of the first times we realized this was on a Wednesday night. Our kids wanted to go to activities at the church. We dropped them off and we went for a run! We thought, this is unbelievable. You can’t do that in the city.

And the other piece is that we felt the greatest sense of call we’ve ever had in our lives to come back and work at Goshen College. There was a connection between the church and the college and we knew we had to check it out.

We attend now because of the combination of historical ties between the college and the church and the exciting new ministries percolating from new leadership and participants.

3. You do fundraising work, and sometimes development work can get a bad reputation. What would you tell people about why you’re drawn to this work?

I almost forget that it gets a bad rap, because that is not where I live in my day to day work! Fundraising is as close to ministry as anything I’ve ever experienced. Sales gets a bad rap. I was an account rep in Indianapolis for many years. Eventually I realized that I was successful as a sales rep because I wasn’t worried about how much money I was making, but because I was focused on helping people solve problems.

To articulate why I was drawn to this work, I could tell you the story about the invitation my wife Lisa and I got to come here to Goshen College. I tried not to come, but it was the clearest sense of call I’ve ever had in my life. With that kind of clarity, the hurdles we had to overcome to make the move were much easier. “Never underestimate the power of someone touched by the spirit of God,” was a quote our new pastor Firman Gingerich said soon after we arrived. I’ll never forget that. President Shirley H. Showalter was a big part of the story, too.

In sales it was clear to me that there was some level of problem solving we were doing, and that I had something of value for the people I was working with. So what is that for fundraising?

The more I’ve been in it, the more I realize that people with wealth have a need to partner with people to achieve the things that the world needs. Everyone has a need to do something outside themselves, and to be able to work with people in that sacred space of helping to make and underwrite important work is a real privilege. It is really about being a resource to people to achieve the things they are trying to achieve: Sometimes it’s philanthropic, but many times it’s actually spiritual. I don’t even think about all those negative associations. One only needs to look around to realize how necessary it is to have finances be a part of conversations about mission and the future of the church.

4. How did your ideas about church, faith, etc. change when you had children?

Now that I have young adult children, I ask myself a lot, where is the leadership of the 20 somethings and the 30 somethings? I’ve become much more keenly aware of that. I know there are some folks who hang onto things and don’t want to change. I don’t want to be like that. I want to err on the other side with my children. I know this is how we did things, but how are you going to do it? What does the future of the church look like through your eyes?

That’s a gift I have through my kids. It’s about mentorship and working on a college campus and recognizing that the future of the church isn’t me. I’m not bummed out about this; I’m excited about the new generation of leaders!

5. What’s something new happening at Goshen College this year?

Despite my deep roots and being here at GC for 19 years, I’m somebody who enjoys change and risk. I’ve seen a lot of change over these 19 years and I’m very excited for the opportunity to work with a new president and continue to develop this vision that has really taken root during the [President Jim] Brenneman years. I feel like now we are actively moving toward the future, where things are headed. We’re connecting more and more with the local Latino community, and a whole new “first generation” of college going students. And seeing how the Board of Directors has changed and their recognition of where our preferred future is makes it an exciting time to be at GC.

I was growing weary of the conflict within the church over many issues. For me particularly, where I was living, I was experiencing fatigue around the way we discussed the national anthem debate and the LGBTQIA changes in policies. It was a real challenge to me: not just professionally, but actually spiritually. I came out of Bluffton, Ohio, and the General Conference Mennonite Church and I always kid around and say I thought I was Mennonite until I got to Goshen and realized I wasn’t! That whole debate about the national anthem issue brought those feelings back up. I just needed a break from it.

Then I got that call inviting me to serve on the EB, I had no interest and I had no intention of saying yes. But as I asked Edie Landis, who called me, why they chose me, I realized that I live my whole life in the “both/and” world. In sales, you hold your deep beliefs about something in conversation with others so that you can see the whole spectrum, and see it through their eyes. She hit right on that for me. She said, “We need somebody who doesn’t already have their mind made up about certain issues, but who can hold those in tension and be a part of a leadership board that has some hard decisions and bumpy roads ahead of us.” I realized that I guess I did have to say yes to this. I never aspired for it, and I didn’t want it or wish it on anyone close to me, but I felt a certain sense of call again to do it because of the gifts that she called out and that other people had identified in me.

My hope for the future and the church is through the filter of my children and future generations, not preservation. As I came in to the board, it was so apparent that there was hurt within the board and I felt it from the outside. From that first meeting I attended [in fall 2015] and the understanding of what came out of Kansas City, I’ve been very encouraged by the conversations around doing something differently. I’m encouraged by the planning that Glen Guyton has been leading for a forward-looking delegate session at Orlando which includes a whole lot of other people who care about our future.

7. What’s a perfect weekend day look like for you?

It involves two wheels of some kind: either bicycle or motorcycle, because I ride both. And it definitely involves the road. I love to drive. And being in the outdoors. And having no obligations at the college or church.

Last fall, before my 55th birthday, I took off of work to celebrate life. It was the day I turned one minute older than my mom was when she died of cancer. I rode my motorcycle to South Haven, Michigan for lunch and back. With lots of time to think inside my helmet alone, I asked myself how the gift of life and the gratitude I feel will affect my moments, days, years and decades ahead. So my perfect day is exactly that: A day to celebrate being alive.