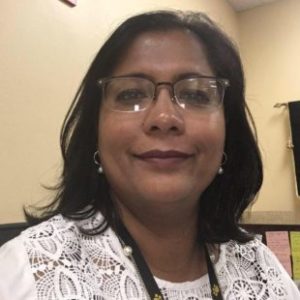 Nisha Subaiya Springer is a member of Mennonite Church USA Executive Board. This post originally appeared on TheMennonite.org as part of its Seven Questions series. Seven question interviews are compiled by Hannah Heinzekehr.

1. What is your earliest memory of church?

My earliest memory of church is a woman named Mrs. Samuel. My family moved to a small town in the south of India. We did not speak Telugu and all the worship services were in Telugu, so we actually stopped attending church at that time. But on my street there was Mrs. Samuel who felt that the children needed some kind of religious education. On a Sunday afternoon, she would nab anybody who walked past her house until she had a sizeable group of kids from the neighborhood. And then she would teach us stories of the Bible, and those stuck with me. Sometimes as kids we thought we were smarter than Mrs. Samuel and we could bypass her house at three in the afternoon and she would not catch us, but she was always smarter than us. She was not a missionary, but she was a born again Protestant Christian and believed in Christian education.

2. When you first arrived in the U.S., what was most surprising for you?

I came to the U.S. alone in 1998. I have extended family that has lived here for very many years, but my parents still live in India and my sister lives in Spain. I moved to the U.S. in 1998 because I was engaged to a man who was a student at AMBS [Anabaptist Mennonite Biblical Seminary in Elkhart, Indiana] and it was an arranged marriage. I would have been 24, going on 25 years old.

I had never seen snow in my entire life and at the Chicago O’Hare Airport, when I landed, there were these mountains of snow. When I saw them I was in disbelief. I asked the guy who I was engaged to, “What are these big hills of white stuff?” And he said, “That’s snow!” And I said, “Isn’t that supposed to be pretty and flat? What are these big hills?”

I lived on 8th Street in Goshen [Indiana] with Rhoda Schrag and I had to walk through Goshen College to the house of the man I was engaged to. He was renting a room in H.S. Bender’s house. So to get there I had to walk through GC and I loved it. I would walk through the entry on College Avenue and I would look at the cafeteria and the international students welcomed me to attend the international students’ night. I was jealous that all these kids were going to this great college.

When I started studies at AMBS a week later, I was just in awe of Mennonites and AMBS. It was the people and the hospitality and the welcoming and the love. And it was the professors coming and talking to you and welcoming you and trying to say something that would make you feel welcome or make some kind of small connection.

Right now I’m learning Spanish and I see that it matters in the same way. When I speak in Spanish to people, I see the relief in their faces. There’s a sense of, “OK, I’m not going to be lost here.” That feeling you get when someone tries to make a connection is so profound.

My first class at AMBS was thinking ethically with Gayle Gerber Koontz and listening to her, I just felt like I had found my tribe. I grew up with my dad working for a similar organization to MCC [Mennonite Central Committee] and he was always working for social justice, like the empowerment of women and the empowerment of untouchables in society. And I had a friend growing up and we would talk against war, but we never made biblical connections to it. So all this time I had these senses of pacifism and social justice on a secular humanist level and then at AMBS it became my faith. As the days went by, it was like I was meant to be there.

3. You attended and worked at AMBS for a long time. What still sticks with you today from that time?

I learned there was actually theology for the social justice pieces I cared about.  It was amazing to see people who actually put these things into practice. It was not a perfect system, but to me it felt pretty darn close to perfect. And it is still pretty close to being as perfect for my faith journey as it ever would be. Even being on the board and going through these last few years has not changed that. This is my tribe and my people and I’m so glad to be journeying in faith with these people. I’d rather be happy and sad and elated and frustrated with these people and this church than anywhere else.

As registrar, for six years, I still always felt like I had the same excitement for my job as the first day I started. I experienced such amazing people and heard their stories and what brought them to the seminary. I always loved reading people’s [application] essays. I was always just blown away by their faith story. Reading those stories strengthened my own faith. Often I would just shut all the doors in my office to read those stories. There was never a single story that was lame or not good enough. I felt I was so privileged to be able to be in that situation and to read these stories and interact with these people. It gave more meaning to the priesthood of all believers concept.

4. What has parenting taught you about faith or God?

The thing about parenting is that you never know who this person is going to be and there’s this realization that you have been charged with somebody’s life that you get to mold and shape. And then you ask this question: why was I chosen for these three people?

I always feel like we need to have faith when we are raising children. Sometimes as parents we try to be over-concerned. We somehow do not believe in our own children and their abilities and we doubt our own abilities to mold and shape them.

For me it’s really important to raise my children in the Mennonite faith and to teach them the tenets of the Sermon on the Mount. Especially because we live in Texas and mainstream life here is so different from how we choose to live our lives as Mennonites. One time my son Rohan told me during the 2012 election that he had formed his own political opinions and he and his friends were having some heated discussions about which was the better [presidential] candidate. And the day of the elections came and Obama won. I asked Rohan, “So, how is this going to be tomorrow at school?”

And he just said, “Mom, aren’t you friends with all the moms here and you have a differing opinion and you are still kind and get along. And that’s how I’m going to be.”

For me, I am always discerning in my head, even if I feel judgmental, I’m always asking, “What does peacemaking look like? How can we change these feelings and find common ground to live together?” I try to incorporate that into our family. Being able to sit down and share a meal with people who are on the opposite side of a political spectrum is a big part of peacemaking in our everyday lives.

5. Why did you say yes to joining the EB?

You know it was that time when I came to the seminary and came for all the wrong reasons, but I found my tribe. When I saw this e-mail from Marty Lehman asking me to be on the board, I said “Really, they thought of me? Are they mistaking me for somebody else?”

But then it made me think about what I had to offer in such an important position. Through that week, after praying and thinking about this, I thought that sometimes God calls us to do something that we have never expected. It’s like that story of Jonah in the stomach of the whale.

There was some burnout from living in a “Mennonite mecca” for me, so I was glad to move to Texas, but it was like that Jonah moment for me. Like God saying, “You can run, but you can’t hide!” It was something that I never expected and for me it was God calling me.

When we moved to Texas and I was glad to be away from such a Mennonite area, we had a failed pastoral candidacy at our church and the interim pastor asked me to be on the church worship team. And then I was on a search committee to keep the pastoral search moving along. So here I was on the pastoral team and helping us find a pastor and then I get this call to be on the EB. I had to just shake my head and say, “You know, I better surrender. This is not going to change.”

6. What are your hopes for the MC USA convention in Orlando this summer?

You know, I really hope that the denomination comes together in an amazing way to see what God is calling us to do. The people that wanted to leave have left and you cannot force anybody to stay. I hope that this convention is really going to rejuvenate our spirituality and bring us together and give us that sense that we are here because God has a purpose for us. I hope we can be open to the spirit leading us in that purpose.

Of course now, given the political environment and our peace stance as Mennonites and how we interpret the call of Jesus as a radical reformer and believer, I hope we are able to grow as a denomination by being a witness to the people who are seeking that kind of radical faith. I hope we lead the way in that. And that was what was exciting for me in listening to a proposal for a large group discernment process [for delegates]. It’s a sign of hope that there is still work to be done and we are being called to do it.

Rohan is actually selling cookies to raise money to go to convention. He is so excited about it. He has already raised half of the money and next weekend we’ll be baking like crazy at our house. Even my younger two loved convention last year.

You know, I went to convention because I was on the Executive Board, but taking my children there has changed my attitude towards convention, because it means so much more to my children and their faith journey and their identity as Mennonites. All of a sudden now convention is quite the priority, because it opens the window from the small church we attend to a larger church and what it means to be a Mennonite follower of Jesus.

7. If you could vacation anywhere, where you would you go and what would you do?

I would go to Spain. I’d see my sister and be by the beach; just walk the playas and visit the small shops and restaurants. The depth of history in Europe is amazing. I also definitely want to go to Africa. If I would go to Africa, I would like to just live on a regular street and wake up in the morning and interact with people and just be there. That’s usually my idea of vacation.

But I also like the mountains. In the United States, I love Colorado for that. It’s my favorite spot to go to that we actually visit. But if I have the money and the choice, I would be going to spend some time in Europe or Africa.