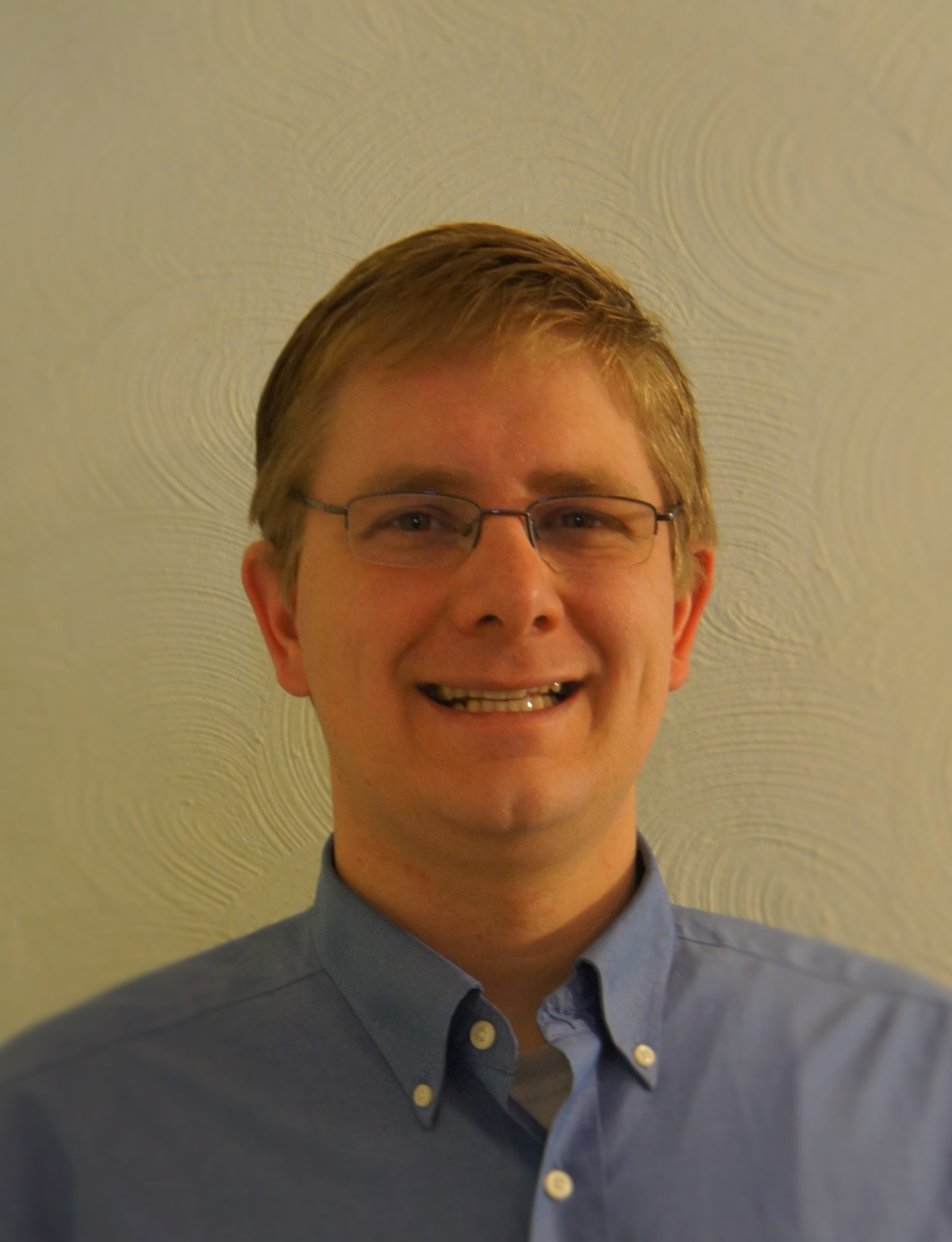 Sam Voth Schrag is a member of Mennonite Church USA Executive Board. This post originally appeared on TheMennonite.org as part of its Seven Questions series. Seven question interviews are compiled by Hannah Heinzekehr.

1. Did you have a favorite Bible story as a child? If so, why was that story your favorite?

My first real memory of Bible reading was at Camp Mennoscah in Kansas. At camp, they had quiet time every day where you had to sit in your cabin. You were supposed to take a nap, but I wasn’t up for naps in third grade. I think it was a rest time for counselors. The only book I would bring was the Bible, so during rest time I would read 1 and 2 Kings and Judges and 1 and 2 Samuel and I would just delight in these stories of violence and sex and chaos. I was a bloodthirsty little guy.

But those are stories of God interacting with the messy world and with messy people and messy politics, and I think that’s kind of shaped my relationship with God, this idea that God’s not absent from the mess. That that’s where we are as people and that’s where God is.

2. You attended Bethel College in Kansas. Who were some of your key mentors during your time there?

Mennonite colleges are awesome. I strongly recommend them. The first thing I’d say is that there are too many mentors to list. I could give you a list of 20 names because the environment was such that almost all the faculty knew almost all the students. I had really powerful mentoring relationships with a lot of people and I think that’s one of the things that makes Mennonite colleges great.

If I had to name two names, I would name Mark Jantzen who is a history professor and one of my major advisors. He really encouraged me to stretch my scholarship and ended up being a mentor at the church where I was a youth pastor after college. And then Patty Shelly, who is one of the Bible professors and the New Testament professor. I spent most of my Bible classes with her and she really taught me how to read the Bible with a rich historical lens and to be reflective in my faith. She’s also just a deeply spiritual person who always brought that aspect of faith into her Bible classroom. She would call us again and again to reflect on how what we learned impacted our lives. And she has continued to be a mentor on the Executive Board.

3. When did you first realize that you might be called to pastoral ministry?

My home congregation, Lorraine Avenue Mennonite Church [Wichita, Kansas], had youth Sundays where kids got to preach. I was kind of a precocious little child, so my peers would often nominate me for the sermon. I would get to preach and afterwards people in the congregation would come up and say, “You really ought to think about being a pastor.” I would always laugh because that wasn’t on my list. But those words stuck with me.

In college, we had a mandatory Bible class. I took one and just really loved it. And there was chapel and I ended up in leadership and ended up in a Bible discussion group. And then there is a ministry inquiry summer internship program, and I ended up going to First Mennonite in Denver with Pastor Vern Rempel and had a blast. I loved the congregation, loved preaching, loved worship prep, and loved the ecumenical stuff Vern was doing in the city of Denver. It was clear that pastoring was what God was calling me to do.

One of the other movements in my call story is that I was a little resistant to being a pastor because you have to deal with conflict and with people, which weren’t really my favorite things to do. But I had a couple of significant moments of seeing pastors do harm. There was a sermon given at Mennonite youth convention that really was offensive to me in terms of what the call was. And when I was a youth pastor, there was a retired pastor who stood up and tried to put a stop to the safe sanctuaries policy to prevent abuse that the congregation was trying to put in place. He said, “Pastors will be under suspicion and guilty until proven innocent. I had friends who were falsely accused.” And then there are just all the awful things pastors say about gay and lesbian people.

One of the reasons that I listened to the call was that I knew that I would like to do this work without causing harm. I would like to be a preacher who doesn’t scare people with hellfire and a preacher who preaches God’s love. I think the world of people like SNAP [the Anabaptist chapter of the Survivor’s Network of Those Abused by Priests] and their efforts to check us from the outside. At the same time, I’ve always felt the calling to be a protective influence from the inside.

4. What do you think has been the most surprising part of being a pastor? What has been different than you expected?

I was well prepared to be surprised. At AMBS, that was one of the things they kept repeating: You’re not going to be fully prepared. The pastoral job is infinitely diverse. Professor Arthur Paul Boers talked about the pastoral imagination as the key pastoral task, because you’re always going to be facing things that you weren’t expecting.

So in many ways, I was unsurprised by the surprises. But I would highlight that two years ago Michael Brown was killed in Ferguson, Missouri, close to us. Since that time, the work of anti-racism has taken a new prominence in my ministry. I certainly never expected to be out in the streets at 1 a.m. smelling tear gas. Trying to navigate those waters of systemic change has perhaps been the most surprising. I come from the Mennonite tradition of the church not being engaged in society. But this event was something that it felt to me and to our church that we couldn’t be silent on and that we couldn’t let lie. There have been a lot of rich experiences, but also some consequences of our choices to be out in the midst of things in Ferguson.

We’ve had protest marches where a third of the congregation will come out and march. One of the ways that we’ve responded is through our connections with Bethesda Mennonite Church, the only other Mennonite congregation in St. Louis which is predominantly a Black church. We have a long relationship with them since the time of our founding, but we’ve redoubled our efforts to build stronger relationships and to be connected in a more profound way. We talked about our Ferguson response as an outside protest element and then our inner work with Bethesda.

5. Tell me about St. Louis Mennonite Fellowship. What’s unique about your congregation?

The people in our congregation are doing good work. I think about the Ten Thousand Villages store that our congregation started. Project Peanut Butter is an organization that a couple of people started that feeds malnourished people in Africa. It’s led a transformation in how global charities address malnutrition and has reduced mortality. I think about the Community Mediation Services of St. Louis, which is a nonprofit that does mediation and the dialogue groups we’ve been running in Ferguson as part of our response.

We’re a consensus congregation. We try to listen to everybody’s perspective and everybody has an opportunity to break consensus if we need to. We’re a covenant congregation, and our membership is determined by who signs the covenant every year.

6. Why did you say yes to the invitation to join the Executive Board? What are your hopes for the upcoming gathering in Orlando?

I was invited at a time when I had been a SLMF and had my feet under me. I had been feeling a nudge for a couple of months that there was some sort of broader or new thing I was supposed to be getting involved in that was outside of the congregation. I had been praying about what that might be and then I got a call saying, “Would you be interested in serving on Executive Board for Mennonite Church USA? They are looking for a young, male pastor from the Midwest.”

They had a grid of demographics that they were trying to live into into in order to represent the church well. That felt like the calling of God. I almost said yes on the spot.

I’ve always been a church nerd and curious about denominational politics and structures. I wrote my research paper in college on Mennonite worship at Mennonite conventions over the years.

The other thing there is that I really believe the EB needs to be representational of the breadth and depth of Mennonite Church USA. I’m really proud of the fact that they insist on 30 percent of board members being people of color and a 50-50 male-female split and that there’s a theological diversity. It’s also so important to have young urban people represented, but also important that we have conservative and traditional leadership on the EB as well. I was aware when I joined the EB that I was going to be the youngest person on the board and the only person on the board younger than 40 when I joined. And I’ve been the youngest person on the board the whole time I’ve been there, although we’ve added peers: [former board member] Isaac Villegas and Joyce Kusuma are within a year older than me. I thought that it was important that the voice of a millennial was on the board and I have been encouraging us to go younger again. It would be very appropriate to have someone in their 20’s. I’m going off the board in Orlando and I hope that they will replace me with someone younger than I am.

I’m looking forward to Orlando. I love conventions. I met my wife at one. The opportunity to be connected with brothers and sisters in Mennonite church is a delight. I love worshipping and singing with thousands of Mennonites. We did a joint trip with Bethesda and SLMF to the 2015 convention in Kansas City and the kids were transformed. It was a wonderful experience for everybody and I fully anticipate Orlando being the same. For the adults, I’m hopeful that it’s an opportunity for us to come together and be church together and to talk about what it means for us to love one another.

7. You have two young children. What has parenting taught you about God/faith/the world?

Before Jonah, was born, one of the members of the congregation talked with us a bit about what parenting means. What she said was that becoming a parent means becoming unbelievably vulnerable. There is this other human being who is completely fragile and you pour your love and your time into them unconditionally and you don’t know how it will turn out. You know that that relationship will be mutual — they will love you, and you will love them — but it will be one-sided because they will be your children and you will be their parents. When they are in middle school and they hate you with every fiber of their being, you will love them unconditionally. It gave me a new appreciation for God’s love and what that kind of unimaginable vulnerability even unto death on a cross means.

It also makes faith formation much more personal. How do you do bedtime prayers with a three year old in a way that he appreciates? What are good children’s story Bibles? We like Desmond Tutu’s. What does it look like at church to balance your expectations of worship and children who aren’t super excited about the structures of sitting and listening and being obedient?