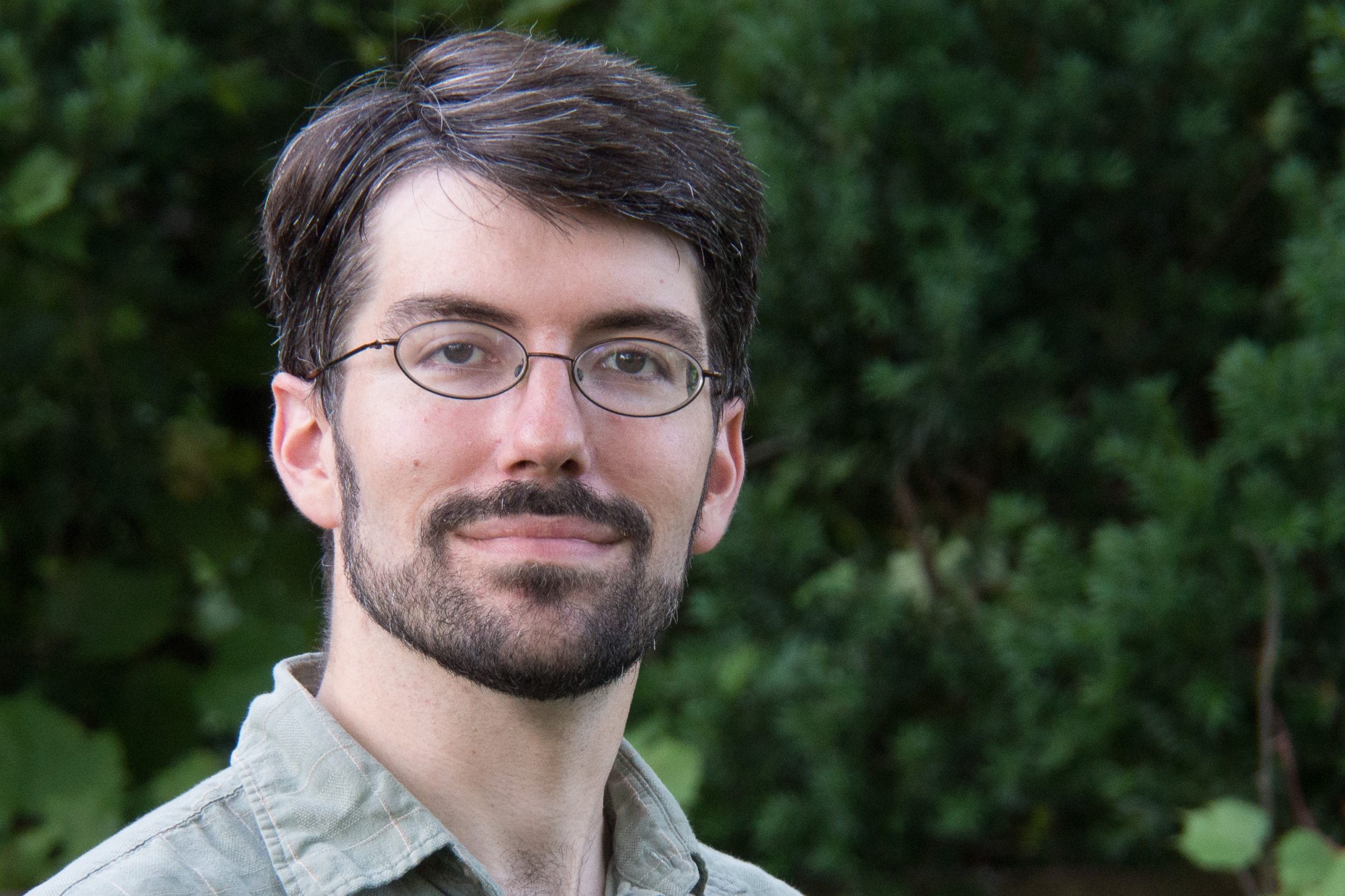 The Fall 2018 issue of Leader magazine includes a section of material under consideration for the Voices Together worship and song book being published in 2020. This post provides background and performance suggestions for those songs, which are being used this Advent and Christmas by Mennonite congregations across the U.S. and Canada.

A Texas native, Chris Shelton is pastor of Broadway Presbyterian Church in Manhattan. “In the Beginning,” a metrical paraphrase of John 1:1-14, is among his first publications. It is paired with the German tune LASST UNS ERFREUEN, which presents a wide range of options for singing. It can be done paperlessly, with a soloist singing the stanzas and the congregation singing the “Alleluia” sections from memory. The melody is versatile enough to welcome a variety of accompaniments, ranging from guitar to organ; for some congregations a cappella singing will beautifully carry the text. Consider varying the musical texture throughout the hymn by contrasting unison with harmony, low voices and high voices, and differing instrumentation.

Jeannette Lindholm is a professor of English at Salem State University in Oregon. Having published her first hymn in the Evangelical Covenant Church’s 1996 hymnal, she subsequently studied hymn writing with Carl P. Daw, Jr., at Boston University. “Unexpected and Mysterious” was first issued as a choral anthem in 2004. Evangelical Lutheran Worship (2006) paired it with the Calvin Hampton tune, ST. HELENA.

Calvin Hampton (1938-1984) was a prolific organist and composer. This tune is among his most widely published and sung. It is most often paired with the text for which it was written, “There’s a Wideness in God’s Mercy.” Its shifting rhythms and unusual harmonic palette make it an evocative vehicle for Lindholm’s text. Having an ensemble prepare the first two stanzas may allow the congregation the opportunity to navigate the melody smoothly. This piece is an instance in which the challenges of learning may illuminate the meaning of the text more fully. And of course, because the text is written in a widely-used meter, it may be paired with a familiar tune for more immediate accessibility.

“Come, Thou Long Expected Jesus” is a familiar and beloved Advent text by the prolific Charles Wesley (1707-1788). Knowing that Wesley frequently wrote many more stanzas than are found in contemporary hymnals, the Voices Together committee hoped to expand upon the two included in Hymnal: A Worship Book by including more of the original text. Upon examining Hymns for the Nativity of Our Lord (1788 edition; originally published in 1744), we found that Wesley only wrote two; however, the following hymn drew upon many of the same themes, and even repeated a few of the same rhymes. That led us to suspect that he wrote both around the same time. We drew upon that second text, “Light of Those Whose Dreary Dwelling,” to provide a second stanza.

Welsh composer Rowland Hugh Prichard (1811-1887) wrote the tune HYFRYDOL (pronounced “hu-fru-dul”) when he was only twenty years old. Its versatility is evident in its appearances in Hymnal: A Worship Book. It is paired with four different texts there, as well as one each in Sing the Journey and Sing the Story.

“With Mary, Sing Magnificat” is also by Jeannette Lindholm. While its first line points to possible use during Advent, its wide-ranging themes make it suitable for many other uses throughout the year. It begins with reference to two familiar Biblical canticles — the Magnificat, Luke 1:46-55, and Miriam’s song, Exodus 15:20-21. Further references give voice to women often ignored or forgotten: Anna (Luke 2:36-38), Rizpah (2 Samuel 21:1-14), and Shiprah and Puah,described here as “clever midwives” (Exodus 1:15-22). Beyond simply cataloging Biblical women, the hymn invites all singers to emulate their courage and prophetic voice.

English composer and hymnal editor Ralph Vaughan Williams (1872-1958) used the folk tune FOREST GREEN with “O Little Town of Bethlehem,” which has become the standard pairing for that text in the British Isles. Consider using folk instruments like fiddle and guitar to provide a dancing feel to the tune, evoking Miriam’s dance.

Poor of the Earth

Brooklyn-based hymn writer Jacque Jones served as President of The Hymn Society from 2014-16. With a background in theater, she often presents imaginative tellings of Biblical narratives from various perspectives, as with the shepherd in “Poor of the Earth.” The plaintive folk tune WAYFARING STRANGER allows for an expressive rendering of the text, especially with its repeated question, “How Will I Know?” Accompaniments ranging from bluegrass/folk to jazz can be appropriate; a simple a cappella rendering of the melody would also evoke the lonesome feeling of the text quite powerfully.

In 2017 the editors of a forthcoming Spanish/English hymnal (Santo, Santo, Santo, anticipated in 2020 from GIA Publications and the Calvin Institute for Christian Worship) invited me to provide English versions of a number of Spanish language hymns. Included in the set was the beautiful Argentine carol, “Noche anunciada.” I submitted the piece anonymously through the Mennonite Worship and Song Committee web portal. The arranger, Carlos Colón, is originally from El Salvador and works at Baylor University. If fluent Spanish speakers are not available to help, online videos of choral arrangements of the song can aid leaders in preparing the Spanish pronunciation. The tune lends itself readily to guitar accompaniment.

While Shepherds Watched Their Flocks

“While Shepherds Watched Their Flocks” was one of the earliest English hymn texts written in a narrative form and not based on the Psalms. Author Nahum Tate (c. 1652-1715) anticipates later work by Isaac Watts in integrating Gospel material, while still remaining close to the King James version of the scripture.

Song writers Maria and Christopher Clymer Kurtz live in Harrisonburg, Virginia, and attend Park View Mennonite Church. In “Solemn Stillness, Weary Streets,” they integrate images from various Christmas carols as well as the nativity narratives found in Matthew and Luke. Although presented in the Leader sampler in four parts throughout, the Voices Together team has found in testing that it is quite effective to keep the stanzas in unison, breaking into parts at the refrain. Although the melody is written as a soprano line, consider mixing the voices, or having the tenors and sopranos trade parts.

“Some sense of the scope of this text can be gained from noticing that the first stanza identifies Jesus as ‘this refugee,’ while the third stanza describes the ‘wandering poor’ who search for ‘a refuge.’ This distance between ‘refugee’ and ‘refuge’ describes the vast area of life where Christians are called to be aware of those whom Jesus called ‘the least of these’ (Matthew 25:40).”

The narrative of the flight into Egypt is an essential part of the Christmas story, but is often overlooked in the midst of joyful carols.

While KING’S WESTON is paired with “At the Name of Jesus” in Hymnal: A Worship Book, some singers may recall its Epiphany association with “From the Eastern Mountains” in the 1969 Mennonite Hymnal. Composer Ralph Vaughan Williams originally intended the tune for unison singing, an option which might allow for a heightened awareness of the text.

See Whose Glory Fills the Skies

The tune WE’LL WALK IN THE LIGHT has normally been associated with Wesley’s “Hark, the Herald Angels Sing.” The refrain and the phrase “Jesus, the light of the world!” have remained, providing a response to “See Whose Glory.” While it has origins in white Gospel singing styles, the tune has proven popular and durable in African-American churches. The arrangement by African-American composer Evelyn Simpson-Currenton reflects the influence of jazz and the blues. A robust accompaniment will enable fully engaged singing.