Voices Together snapshot of songs and resources 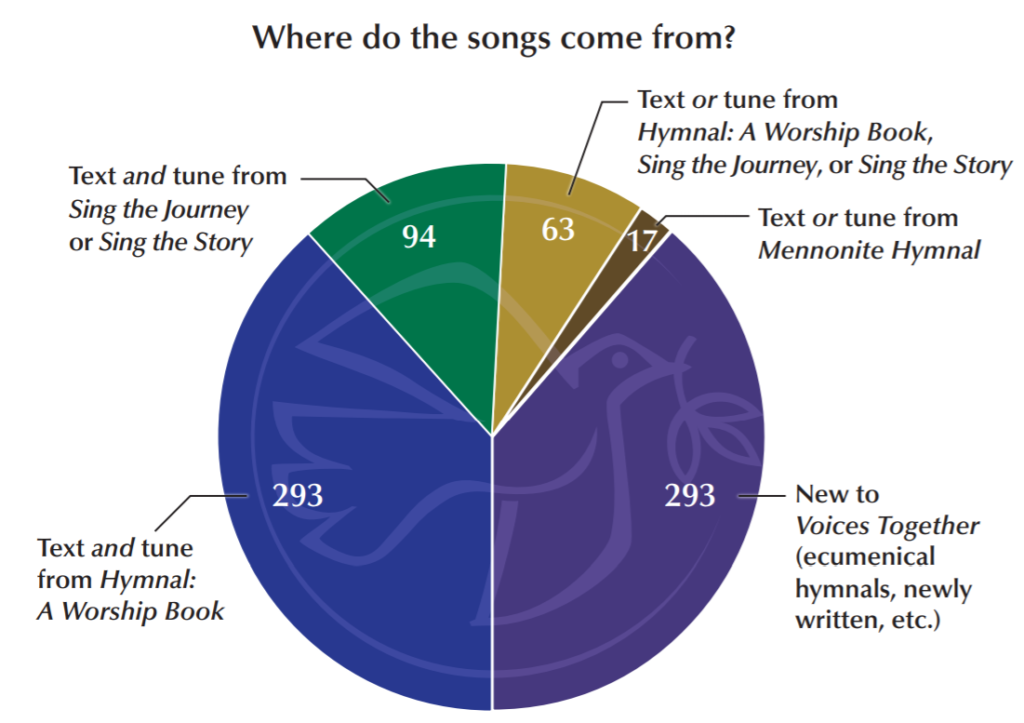 “Where do the songs come from?” (page 4) is one of the newly released Voices Together analysis graphics.

Early on Saturday morning, August 22, a highly anticipated 20-page PDF was uploaded to the Voices Together website: lists of the songs and resources in the new Mennonite hymnal.

The information in the document represents four years of committee meetings, emails, and zoom calls, but more importantly, it represents hundreds of years of church history. To accompany the list of songs and resources, committee members also included an analysis of the contents of Voices Together through graphics. These graphics provide information including origins of the songs, languages represented, voice parts included, and historical span of the resources.

We hope that by viewing the big picture as represented in these graphics, communities will be able to better understand the breadth of the resources and the many ways the material can be useful, worshipful, and enjoyable for them.

This blog post will walk you through the graphics in this new Voices Together document, offering some additional context about committee research and processes.

Where do the songs come from?

This graphic (page 4) gives the numbers of texts, tunes, and text-tune pairs that come from recent Mennonite collections. It is common in hymnody for authors and composers to write texts and tunes that are interchangeable. The Metrical Index groups tunes by their shared meters, which indicates which texts and tunes can be paired.

In recent collections, some heart songs feel inseparable – imagine singing “Come Thou Fount” (tune name NETTLETON) with the tune HYFRYDOL (which you may know with “Come, Thou Long-Expected Jesus”). While HYFRYDOL feels strange with the “Come Thou Fount” text, we are used to re-pairing it – HYFRYDOL is used four times in Hymnal: A Worship Book (HWB): “Come, Thou Long-Expected Jesus,” “God, Whose Giving,” “Hear Us Now, O God Our Maker,” and “God the Spirit, Guide and Guardian.” In Voices Together, we kept “Come, Thou Long-Expected Jesus” and “God, Whose Giving” with HYRFYDOL and re-paired “God the Spirit, Guide and Guardian” with a more recently-written tune called TREASURED by Sally Ann Morris. The latter pairing would fit into the piece of the pie chart labeled “Text or tune from HWB, Sing the Journey (STJ), or Sing the Story (STS)” because the HWB text is included with a new tune. The piece of the pie called “Text or tune from Mennonite Hymnal (MH)” includes some pairs as well, such as “Be Still, My Soul” (still with the beloved FINLANDIA), and we paired FINLANDIA with two additional texts – you’re welcome!

What languages are represented?

This graphic (page 5) depicts the languages found in Voices Together. You will see 42 languages on this chart, with Spanish and German as the most-included languages after English. One may ask why there are only 740 English songs out of 760 songs in the collection. While most songs in another language include an English translation, the remaining 20 songs are well-known phrases and texts from traditional liturgy: hallelujah and alleluia (Hebrew and Greek, respectively), kyrie eleison (Greek), veni sancti spiritus and ubi caritas (and other Latin phrases). Voices Together is handling multiple languages slightly differently than Hymnal: A Worship Book. In Voices Together (like Sing the Story and Sing the Journey), when the original language is included, it is presented in plain font while translations are italicized. Texts that were written bilingually are both in plain font. This helps communities better understand and appreciate the origins of the song.

Timeline of tunes and texts

Two other notable numbers are the 11 texts from the fourth century and 11 texts from the fourth century B.C. These are settings of liturgical texts Hallelujah, Alleluia, and Kyrie, which are ancient expressions of worship. Here are examples of the ascriptions you will see at the bottom of those pages in Voices Together, which very briefly tell the history of the phrases:

What is the breakdown of voice parts?

This graphic (page 7) simplifies a wide diversity of songs. Unison songs include canons, chant, songs from around the world, and melodies meant for accompaniment by a wide variety of instruments. Some African American spirituals and camp songs are presented in unison to encourage improvised vocal harmonization. “Other” refers to 2-part and 3-part songs, as well as those that include both unison and harmony. The 4-part category includes many musical styles and time periods from around the world, such as 17th-century German, 20th-century South African, and 21st-century Canadian and U.S. American. 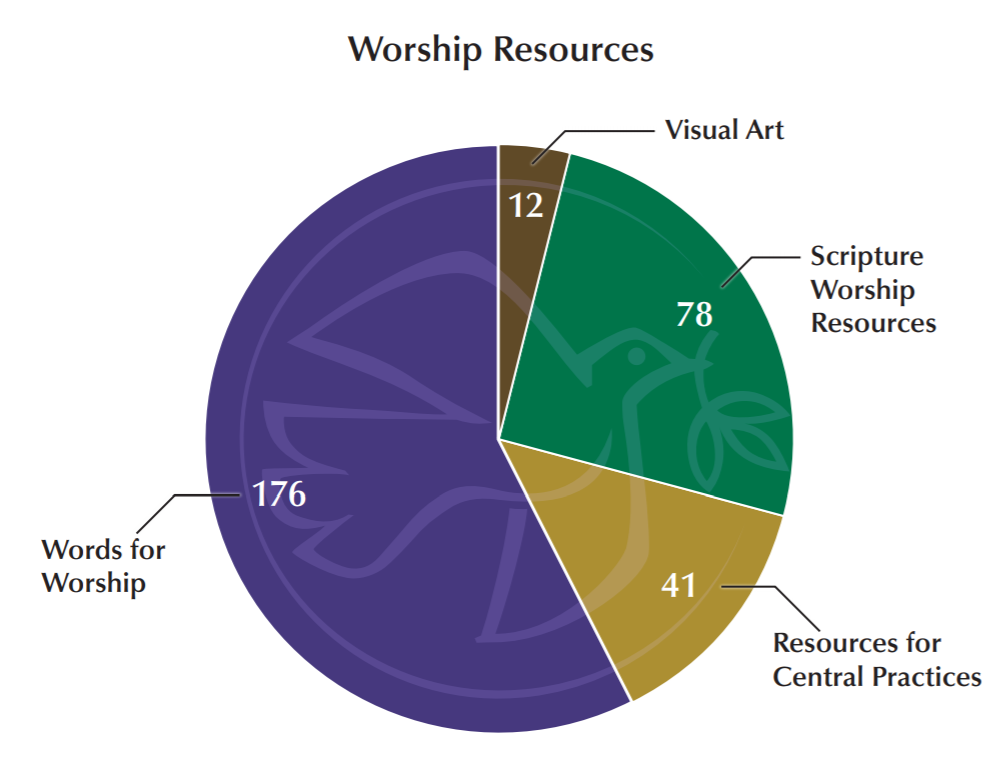 A graphic on the worship resources included in Voices Together.

This graphic (page 8) describes the types of worship resources throughout the book. “Words for Worship” refers to the general resources that serve the church throughout the year: calls to worship, offering prayers, etc. “Scripture Worship Resources” are scripture passages that have been selected in consultation with biblical scholars and formatted for corporate reading. “Resources for Central Practices” were developed by a committee that evaluated key practices within Mennonite worship, such as baptism and communion. “Visual Art” is new to Voices Together: the hymnal will contain 12 works of visual art by Mennonite artists across Canada and the United States. The list of “Worship Resource Facts” notes a number of resources from the Reformation era (1500s) and before. One example of this is “Gardener God” by Pilgrim Marpeck, which was recently featured as a sneak peek on the Voices Together Facebook page.

Voices Together is rich with resources from around the world, many different historical eras, and many different expressions of worship. As you discover the diversity of material in Voices Together, we hope that you and your community find yourselves represented in the songs and resources. We hope you will find items you are immediately excited about, and material that sparks your curiosity.