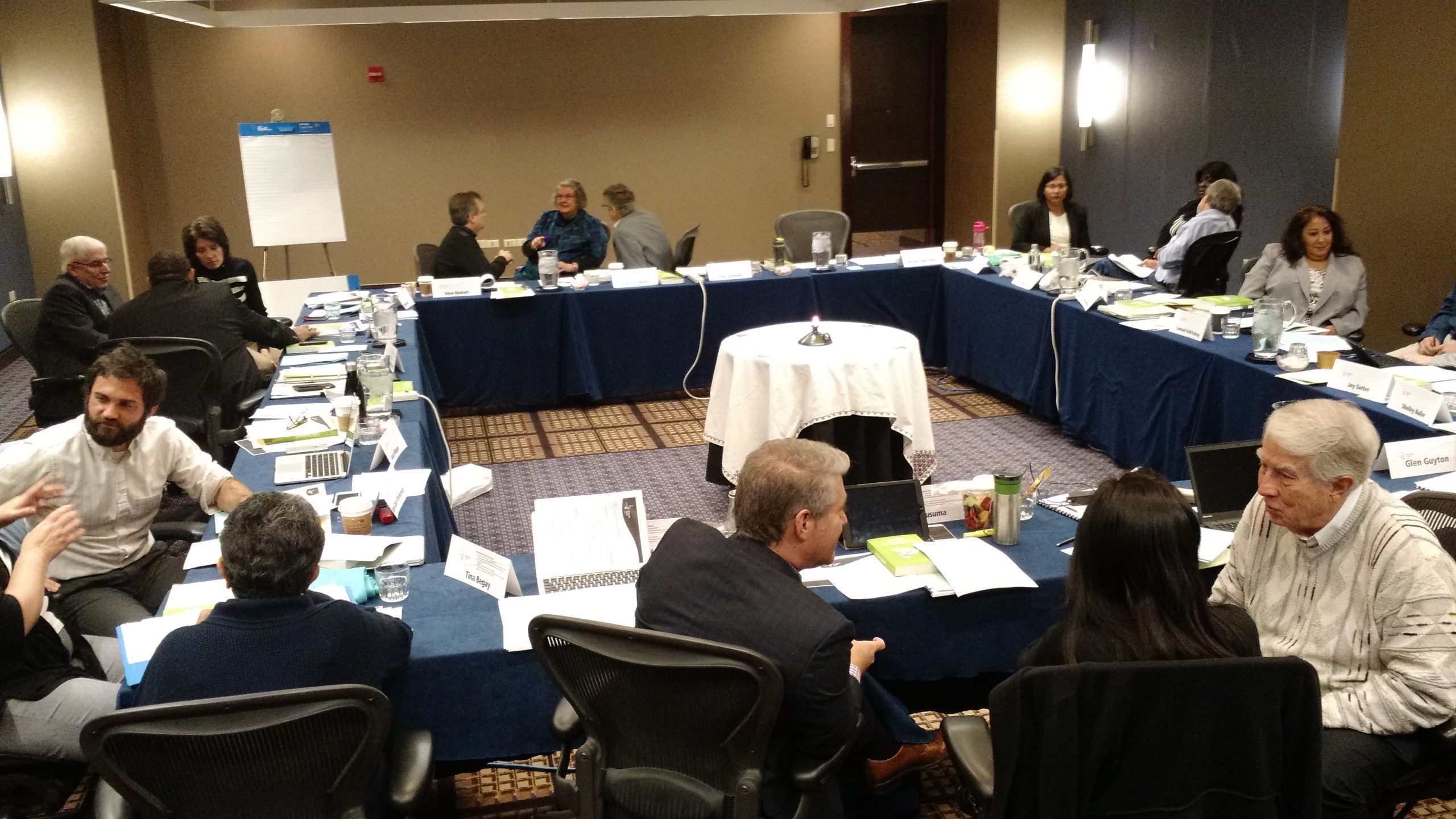 In addition to spending time in worship and prayer, the EB members passed a statement clarifying the meaning of forbearance, conducted a review of Mennonite Education Agency (MEA), discussed a proposal to create a new Racial Ethnic Council and voted against a petition asking for the Brethren-Mennonite Council for LGBT Interests (BMC) to become a new constituency group.

Implications of the Forbearance and Membership Guidelines resolutions

EB members noted that the adoption of both the Membership Guidelines and the Forbearance resolutions by delegates at the 2015 Delegate Assembly in Kansas City has caused significant confusion for many across the church. The EB passed the following statement to help clarify the meaning of forbearance and to name the practical implications of the tensions between the two resolutions.

Taken together, the Forbearance Resolution and the Membership Guidelines Resolution reflect the tension between freedom and mutual accountability, which helps us live out deeply-held convictions in a spirit of peace within our diverse denomination. As an Executive Board, we believe our church will be strengthened by a humble pursuit of God’s will through ongoing study of the Scriptures and in interactions with fellow believers, even those with whom we disagree. Forbearance does not mean that our theological agreements are nullified, nor that we will bless everything that local congregations and conferences decide to do. As a board, we intend to govern with a spirit of humility, guided by the theological stance as voiced in the Confession of Faith in a Mennonite Perspective, and as expressed in practical terms in the Membership Guidelines and the ministerial polity manual — A Shared Understanding of Church Leadership.

The statement passed with a vote of 10 to four, with two abstaining. 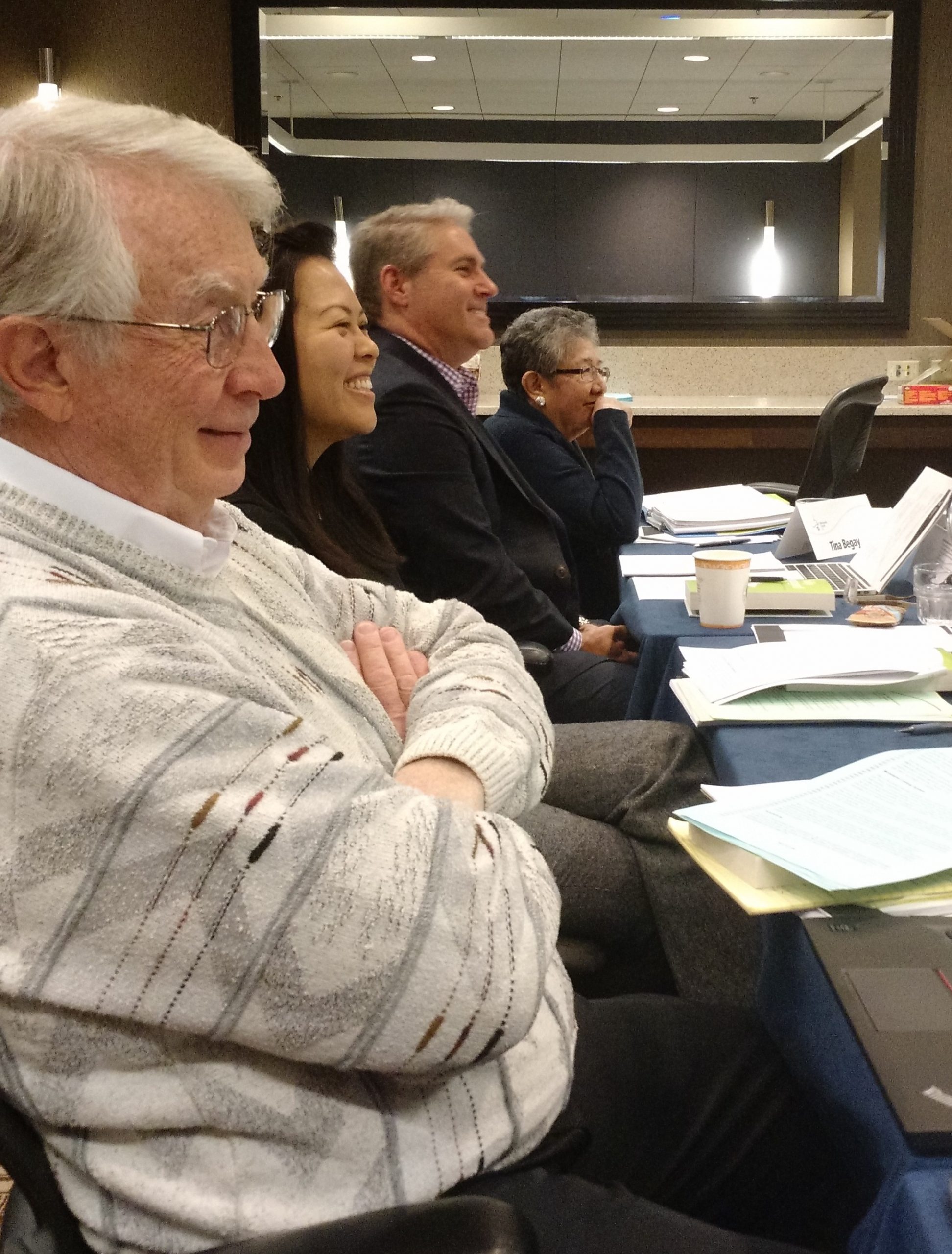 One day prior to the EB meetings, agency CEOs, board chairs, denominational leaders and staff met for a day of long-term “scenario planning.” The group worked together to name the shared challenges they face, as well as sources of resilience and opportunities for stronger collaboration moving forward.

At the EB meetings, Ervin Stutzman, executive director of Mennonite Church USA, announced that he is planning a full-scale revision of the Purposeful Plan (PP) in time for the 2017 convention in Orlando, Florida. As scenario planning continues, he will incorporate the results of this discernment into the revision. This update is intended to give the church a clear direction of “where we are headed in a time of significant change,” according to Stutzman.

Stutzman named evangelism and revitalization as two important foci as the church moves forward through crisis and conflict. The EB affirmed this direction and encouraged staff to engage with the CLC to “identify vital and growing congregations” from across the denomination — to learn from them and to develop and promote resources to equip congregations in this work.

“This is such a great time for re-innovation — to reach out to a group of people looking for something different and unique,” said Nisha Springer, EB member from Peace Mennonite Church in Dallas, Texas. “At Peace Mennonite Church, we have people from so many paths coming to our church because they read about the Mennonite Church on our website. I see a lot of craving from people who want social justice and peace and a new way to think about church.”

Despite declining membership and resources, Mennonite Church USA’s Executive Board remained in the black this year. Glen Alexander Guyton, chief operating officer of Mennonite Church USA, presented the EB financial audit, which was approved with appreciation. 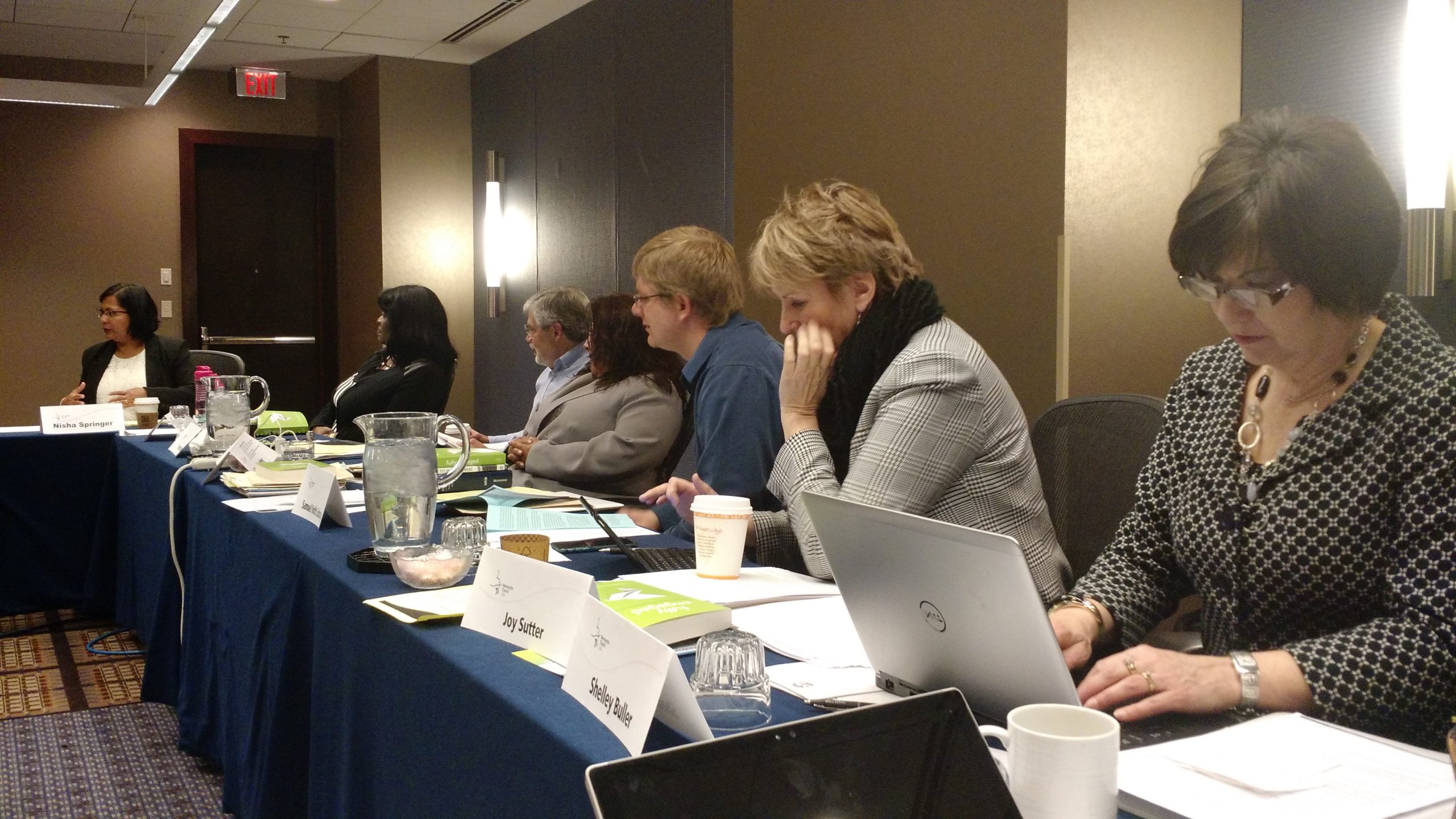 Guyton also gave a planning update for Orlando 2017 and unveiled a Star Wars-themed announcement video. Convention will be held July 4–8, with delegate meetings starting on Thursday, July 6. The event will be one day shorter overall and will focus on the theme, “Love is a verb.”

The board discussed potential changes to the delegate sessions and resolutions process, naming the problem that resolutions are often “unfunded mandates” lacking clear implementation, and noting concerns about lack of sufficient time to fully engage the five resolutions presented at the KC2015 Delegate Assembly.

The Kansas City convention’s Anti-Racism Monitoring Team prepared the following list of five anti-racism priorities for the EB to work on for the next convention:

The EB received these anti-racism priorities with appreciation and approved them unanimously.

The EB conducts a review of each agency on a rotating basis; this time it was Mennonite Education Agency’s turn. The board decided to take a “deeper dive” than it has in the past, appointing a small liaison committee of EB members — Joy Sutter of East Norriton, Pennsylvania; Yvonne Diaz of Terlingua, Texas; and Phil Rich of Archbold, Ohio — to facilitate the process. Carlos Romero, CEO of MEA, and Judy Miller, MEA board chair, presented the report on MEA’s work, identifying priorities and key challenges. 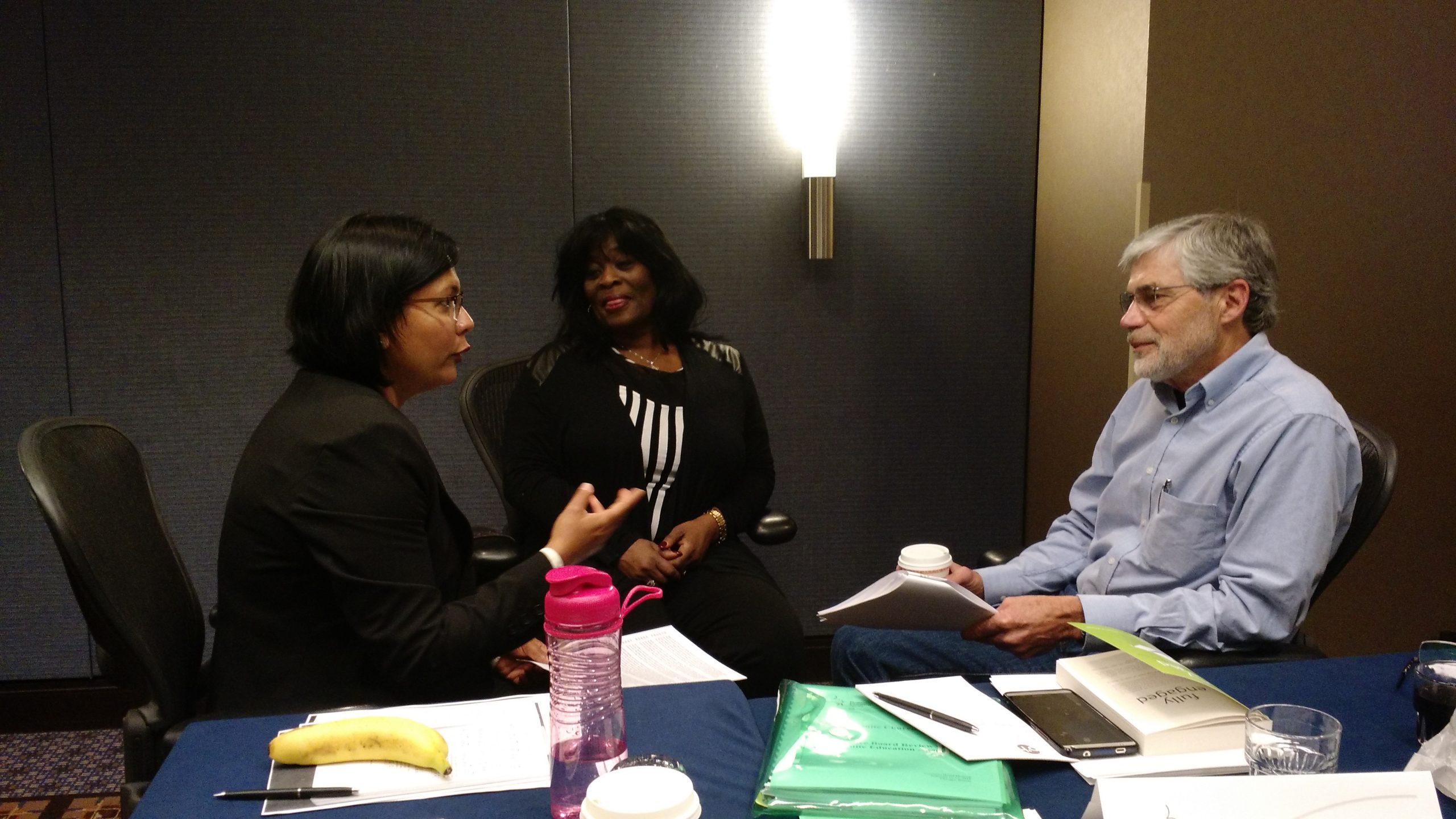 The board expressed affirmation for MEA’s thorough report and asked questions about external tensions arising from major societal shifts in higher education, as well as internal tensions related to MEA’s broad range of work coupled with shrinking financial resources and limited staff time.

Despite the effects of the changing landscape of higher education, MEA leaders remain hopeful and passionate about what the agency has to offer.

“We need a new way of thinking about our Mennonite educational institutions,” said Romero. “We want the church to embrace our colleges and seminaries as the center of mission and outreach for the denomination. We have a message to share that has value and that we think the world needs.”

The board unanimously approved a request from the Intercultural Relations Reference Council (IRRC) to change its name to Racial Ethnic Council. The IRRC was formed for the particular task of overseeing the Office of Intercultural Relations, which no longer exists. IRRC members requested a different name because the scope of their work has broadened and the reference group title no longer applies.

The action would require a vote by the delegate body, since it would be a change to the denominational bylaws. EB members will continue to discuss the specific changes at their next meeting in preparation for the Orlando Delegate Assembly.

The EB voted against a petition requesting that the Brethren-Mennonite Council for LGBT Interests become a new constituency group with representation on the Constituency Leaders Council, the advisory group and board of elders for the denomination. The EB first reviewed the petition in 2015 and sent it to CLC members for feedback at their October 2015 meeting.

The CLC, which is made up of representatives from area conferences and constituency groups, sent counsel back to the board to reject the petition for a number of reasons, including the concern that BMC is a multi-denominational group and that just two representatives from the LGBTQ (lesbian, gay, bisexual, transgender, queer) community would not be a significant enough presence for dialogue.

Though the board voted against the petition to add the BMC as a constituency group, the motion encouraged the CLC to brainstorm other options to open up space for dialogue with LGBTQ members in the Church. This discussion will be on the agenda for the CLC’s next meeting in March. 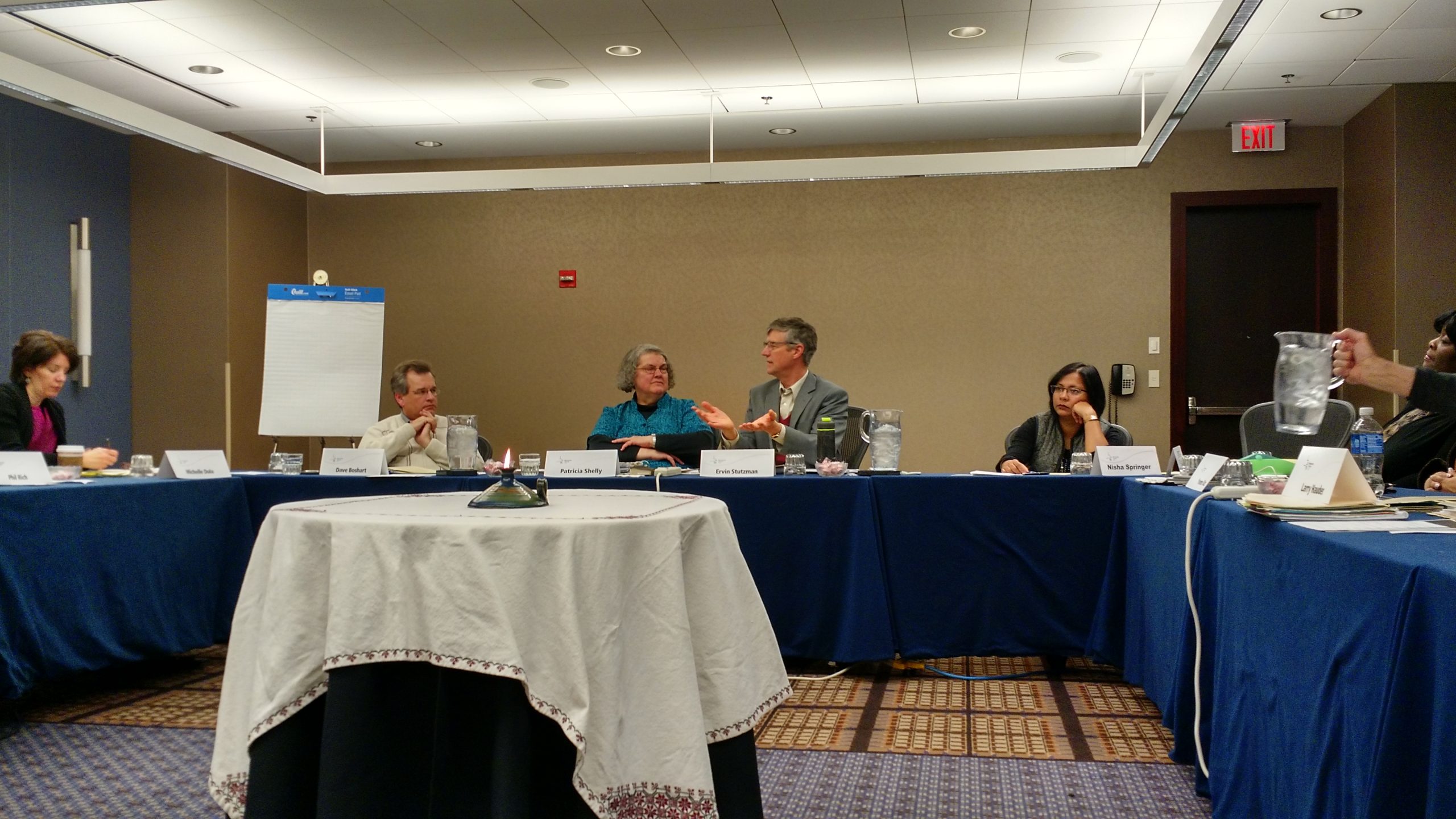 Throughout the meetings, Sutter and Samuel Voth Schrag, EB member and pastor of Saint Louis (Missouri) Mennonite Fellowship, led worship structured around Richard Foster’s six streams of spirituality. Board members reflected on which streams they personally resonate with, and some provided testimonies.

“We tend to compare the worst of other streams with the best of our own, but all of the six streams have downsides and upsides,” noted Stutzman. “In Mennonite Church USA, we want to help bring out the best of each of these streams, providing a place of belonging for all of the diversity in this denomination.”

At the end of the final day of meetings, EB members gathered around the EB staff and prayed for their ongoing work.

The next meeting of the Executive Board will take place June 2–4, 2016, in Orlando, Florida.