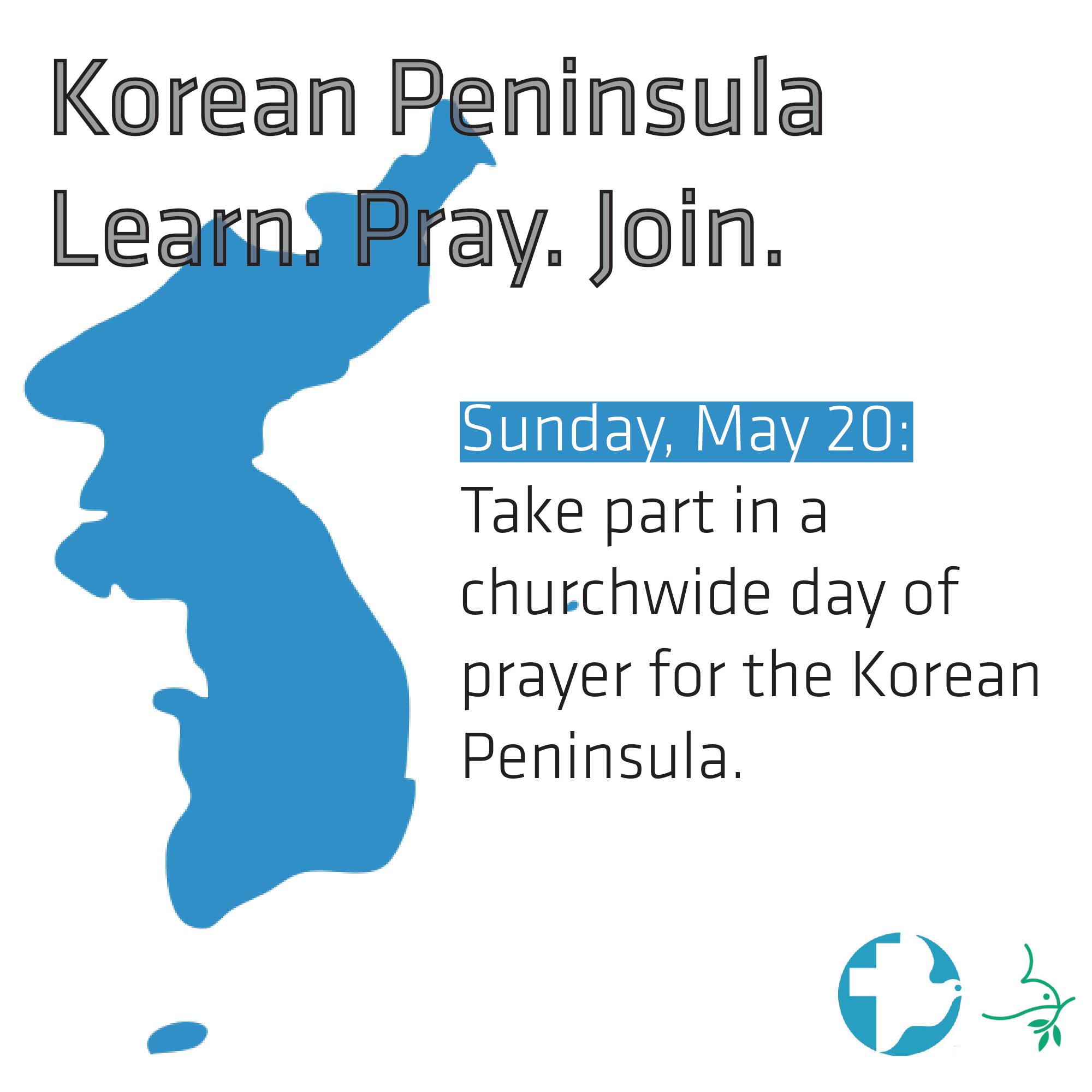 (Mennonite Church USA) — Congregations and individuals are invited to engage in a collective day of prayer for North and South Korea on Sunday, May 20, 2018. This “Learn, Pray, Join” initiative is through a partnership with MC USA staff, Mennonite Mission Network, Mennonite Central Committee (MCC) and ReconciliAsian.

Congregations and individuals can join the day of prayer using MCC’s “A prayer for peace in North Korea” linked and printed below. This prayer can be shared in church services by reading it, or by sharing the video of the prayer created by MCC.

This date marks an important time for prayer—North Korea and South Korea participated in a historic summit on April 27, where North Korea’s Kim Jong Un and South Korean President Moon Jae-in announced that the two nations will work toward a peace treaty and eliminating nuclear weapons. A talk between the United States and North Korea is planned for late May or early June.

“We are witnessing a historic moment of new possibilities for the Korean Peninsula. The United States has a critical role in this peacemaking process, so we want to use this precious window of opportunity to learn, pray and join in action together to promote peace,” explained Sue Park-Hur, MC USA denominational minister for Leadership Development and co-director of ReconciliAsian.

This initiative invites MC USA members and congregations to:

Learn: During the month of May, commit to learning more about the history of the Korean Peninsula and the dynamics of tension and conflict there.

• Peace and Justice Support Network’s (PJSN) Peace Lab podcast will feature an episode on North Korea in early May, exploring the history of tension and conflict in the region and what MC USA members can do to promote peace. Host Jason Boone will be joined by Sue Park-Hur and Joy Yoon, a friend and partner of ReconciliAsian who has served in North Korea on and off for more than a decade.

•Sign up now to participate in a free informative webinar on the Korean Peninsula, including time for Q&A, led by Sue Park-Hur on May 15 from 7:30-8:30 p.m. EST. Email SuePH@MennoniteUSA.org to register.

Pray: Join together with congregations across MC USA during worship on Sunday, May 20 to pray for peace and clear minds for all leaders engaged in historic talks regarding the future of North and South Korea, and nuclear disarmament, using MCC’s “A prayer for peace in North Korea,” which is printed below.

Join: Consider ways you can actively promote peace in this region by:

ReconciliAsian, a peace center in Los Angeles that equips leaders in Korean and American churches and communities to serve in ways that promote unity, justice and peace toward reconciliation, plans to hold a day-long conference on May 19 called “Journey towards reconciliation in the Korean Peninsula” to examine the current realities in the Korean Peninsula through social, political, and theological lenses. Space is still available, and you can find more information here.

“We as Americans, have a critical role to promote peace in the Korean Peninsula. We have the power to talk to our officials to speak against preemptive military strike,” said Park-Hur.

Mennonite Mission Network has a long history of working with peacemakers and supporting local initiatives on the Korean peninsula, including the Korea Peacebuilding Institute, which specializes in teaching restorative justice through lectures and workshops for communities, schools, workplaces and government organizations.

“The conflict between North and South Korea is at a critical stage,” said Jason Boone of Mennonite Mission Network’s PJSN. “We encourage churches to take time to pray for a peaceful resolution.”

MCC work began in South Korea in 1950 and in North Korea 22 years ago. In South Korea today, MCC supports peacebuilding work with church partners. In North Korea, MCC helps farmers grow better food, supports soy milk production for children, and provides material assistance and canned meat for tuberculosis patients and children at pediatric hospitals. MCC also advocates with the U.S. government for engagement to reduce hostilities. MCC seeks to cultivate face-to-face encounters for exchange and learning between North Koreans and people of Canada and the U.S., including mutual travel to build relationships.

“Living in South Korea, I see a deep restlessness for a new future of peace with North Korean people. On my MCC visits to North Korea, I sense a similar deep yearning toward the South,” said Chris Rice, an MCC representative for Northeast Asia. “May we U.S. Christians have courage to call the U.S. government to use its power to support this deep yearning for friendship and reunion.”

A prayer for peace in North Korea

Dear Lord, send your Spirit to establish peace between nations.
We bring before you the disunity of Northeast Asia,
it’s history of injustice and oppression,
the fear of the unknown,
and now threats of nuclear war.

May your church be a voice of reason,
reaching across divides to speak peace in a region
that has endured 70 years of hostility and division.
Strengthen the will of those who work for reconciliation and peace.

Renew your church
And give us the peace which the world cannot give, Amen.

Link to the initiative webpage: http://mennoniteusa.org/korea/