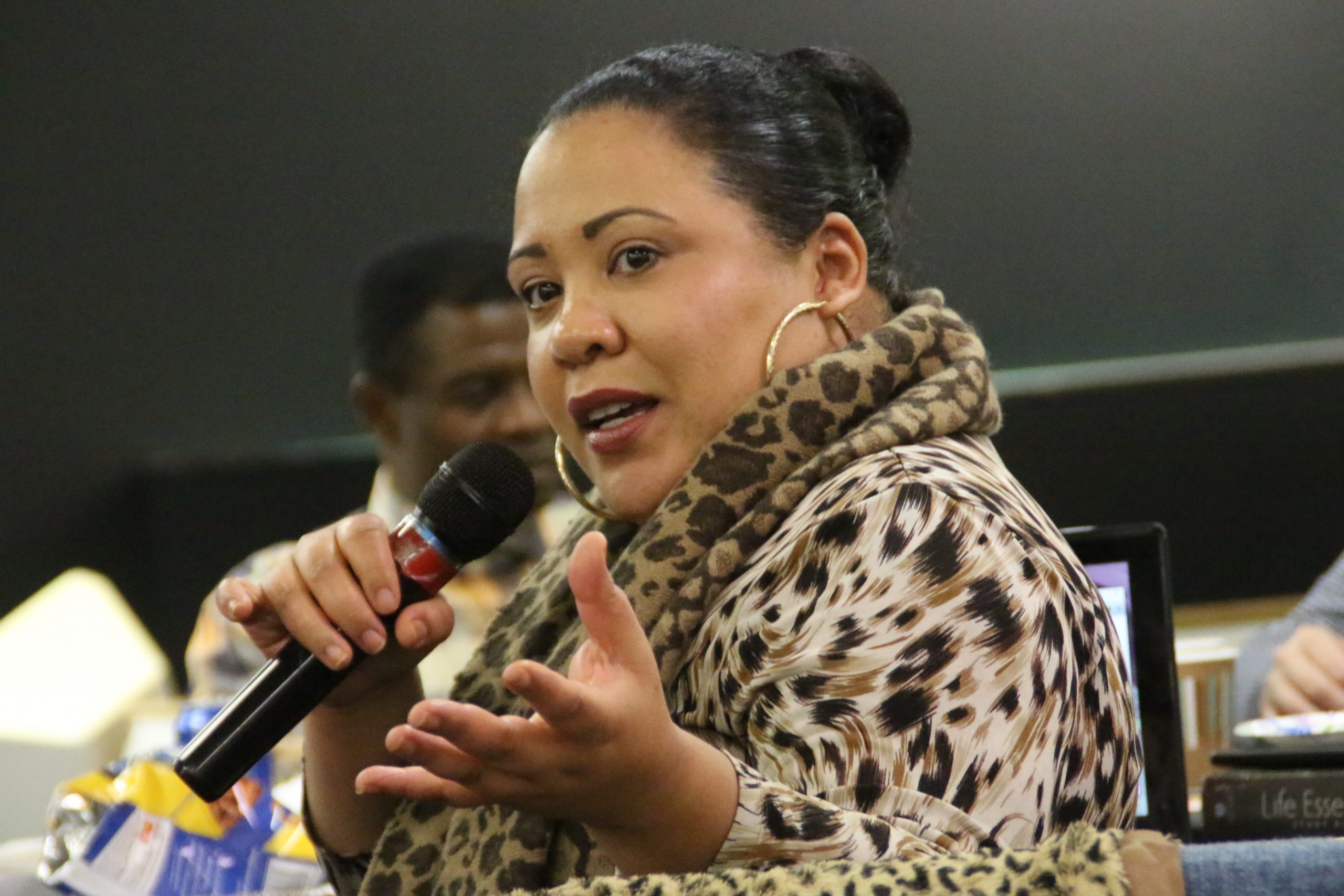 Melody Pannell of Eastern Mennonite University, Harrisonburg, Virginia, was among the first-time attendees who contributed to the gathering. (Photo by Carol Roth)

About 60 attendees braved the unusually cold climate and snow dumped across airports and highways to meet at Calvary Community Church (C3) in Hampton, Virginia. Winter storm Jonas hampered the arrival of 19 registered participants.

The four-day gathering provides a space where people of color, who are leaders in Mennonite churches, institutions and agencies, can network and strategize with each other and with leaders who are White. Together, they aim to develop concrete ways to help the church adjust positively to its rapid growth among people of color compared to that of predominantly White congregations.

Attendees met in separate racial “caucuses” and then together in multiracial work groups. They explored issues of race, ethnicity and gender through the theme, “Equipping the Saints,” based on Ephesians 4:12-16. Each evening, attendees ventured out together for dinner. They culminated the gathering on Sunday morning by worshiping at C3, where the choir raised the praise in contemporary African-American style. C3 Senior Pastor Bishop L.W. Francisco urged congregants to activate the greatness of God that is inside them.

Each HFF gathering has had a different emphasis. This year’s focus was on human resources to identify best practices to increase the flow of diverse candidates into the hiring pipeline. During Saturday’s session, a spirit of urgency for real change gripped many who had attended previous HFF gatherings, and also first-timers whose expectations were high. Together, attendees pushed for more time and more focus on specific policies for positive change. 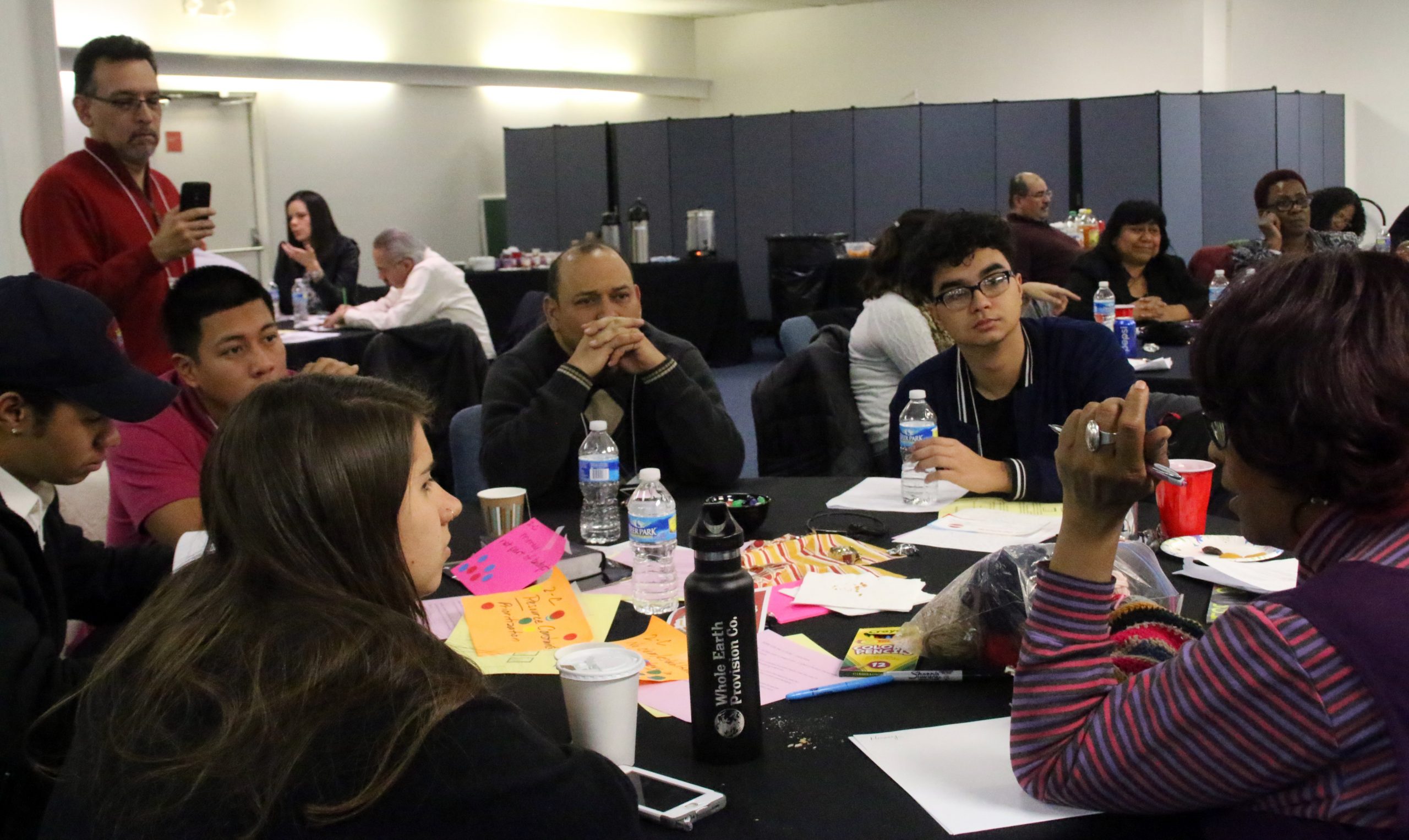 In November 2015, Zenebe Abebe, who had attended two previous HFF gatherings, wrote an opinion piece for The Mennonite titled “Hope for the Future requires changing our direction.”  Abebe, who is Black and a member of Shalom Mennonite Church in Indianapolis, wrote: “I challenge leaders from the dominant culture to consider a full-fledged promise to make change happen. I challenge the power brokers and the people of color to form solidarity and come up with an action plan to bring about tangible change.”

“I think it’s healthy to push and be pushed,” said Brenneman, who is White.

First-timer Melody Pannell, a professor at Eastern Mennonite University, Harrisonburg, Virginia, said that she, too, came ready to delve into specific solutions.

“I think a lot of the feedback definitely needs to be turned to action that can give hope to the future generations,” said Pannell, adding that over the years she has attended several Mennonite gatherings to discuss how to improve race relations and improve diversity.

HFF planning committee members will refine the entire list of recommendations (including others not mentioned here) and will present to institutional leaders. (See the follow-up article, added May 12, 2016.)

“This is where we wanted to go,” said Iris de Léon-Hartshorn, director for transformative peacemaking for Mennonite Church USA and a HFF planning committee member. “This is an adaptive group. We’re not going to stay stagnant. This is the work that has led up to finally having some outcomes to recommend policies and strategies to our institutions. We’re doing this work for the next generation.” 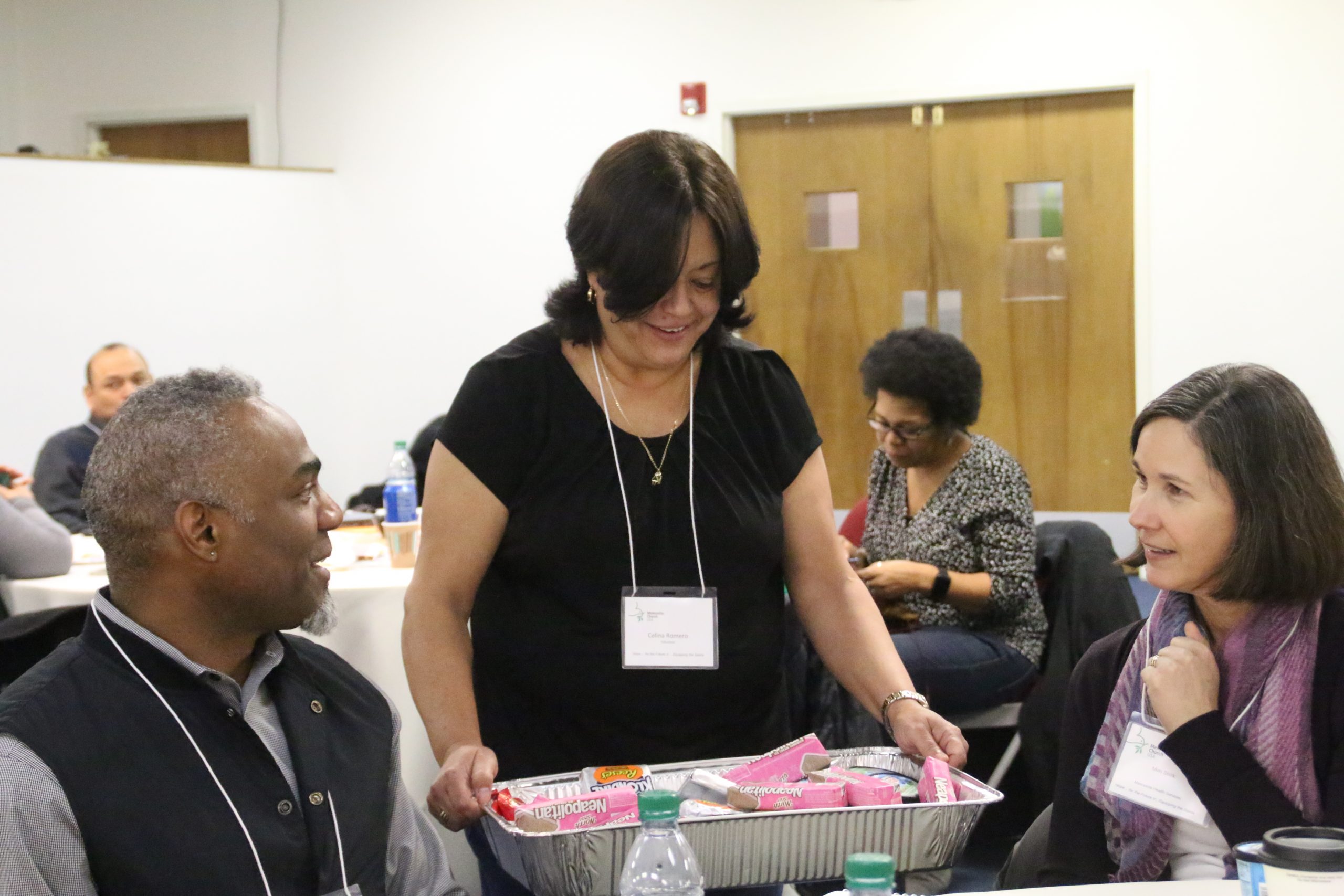 Celina Romero (standing) of The Mennonite shares with Ewuare Osayande of Mennonite Central Committee and Mim Shirk of MHS as they participate in a work group. (Photo by Carol Roth)

The 2015 gathering invited college students for the first time and focused on how to identify who has power in an organization or given situation. It also featured a town-hall-style human resources panel that had a lively question-and-answer discussion.

Rachel Stoltzfus, senior executive for Human Resources at Mission Network, and Eunice Culp, vice president of Human Resources for Everence, were among those on that eye-opening panel. It was the first HFF gathering for both of them.

Culp said she came this year expecting to explore details on how to “move from where we are and how to go further.”

“I think we got some really good things written down this time around,” Culp said. “Racial diversity is a high priority for us as an organization. Networking has been really helpful because getting to know people is really important.”

Culp said that she and her fellow human resource leaders across the church have since been intentionally maintaining contact and sharing information. They are planning to meet in April to discuss best practices and improvements, such as sharing a database of diverse contacts, she said.

Tapping into congregations that are predominantly people of color is a key solution, said Glen Alexander Guyton, chief operating officer for Mennonite Church USA. Guyton was a minister at C3 for 17 years before being hired by Mennonite Church USA in 2009 and moving to San Antonio, Texas.

“The Mennonite Church system can be quite complex to navigate,” said Guyton, adding that he came “home to C3” eager to make connections with people of color at the gathering to utilize in his work. “You need mentors to introduce you to the right people to help you understand how you can be successful in the church. When you have leaders such as Bishop Francisco, he can take you around and make introductions that lead to important relationships.”

Working at Racial/Ethnic equality is complex because just as White Mennonites are not monolithic in terms of thought, people of color aren’t, either. However, they share the same love for the church and desire to help it to thrive, said HFF planning committee member Regina Shands Stoltzfus, an assistant professor at Goshen College.

“There’s an urgency to get things done, and the reality is that we need both that urgency and the building of the capacity to move through our strategies and plans,” said Shands Stoltzfus, who recently received the 2016 Spirit of Justice Award from the Indiana Civil Rights Commission – their highest honor.

Experiencing her first HFF gathering, Mim Shirk, vice president of MHS, said that she, too, was struck and humbled by the complexities of the discussions among the groups, and remains committed to Racial/Ethnic diversity.

“I encourage the people, especially those who have been in this a long time, to stay with it,” she said.

6991: Melody Pannell of Eastern Mennonite University, Harrisonburg, Virginia, was among the first-time attendees who contributed to the gathering. (Photo by Carol Roth)

7114: Celina Romero (standing) of The Mennonite shares with Ewuare Osayande of Mennonite Central Committee and Mim Shirk of MHS as they participate in a work group. (Photo by Carol Roth)