#WeAreMenno: The movement of God through simultaneous interpretation 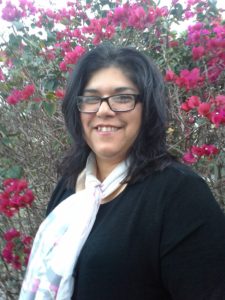 Alma Ovalle Perez is a wife, and a mother of three wonderful teenagers. She is the daughter of Gilberto and Elizabeth Perez.  Alma is a high school Spanish teacher, simultaneous interpreter and writer.  She sits on the board of Mennonite Women USA representing Iglesia Menonita Hispana and is on the executive committee for Southeast Mennonite Conference of Mennonite Women USA. Alma lives in Sarasota, Florida.

From a very young age, languages have always intrigued me. Growing up in South Texas, my world revolved around the constant movement between two languages. Speaking Spanish and English has been a natural part of my upbringing.

From the countless sermons I heard my father, Gilberto Perez, preach in Spanish at Iglesia Menonita El Mesias in Robstown, to the countless children’s books my mother read to my brother and me in English.  From the Spanish Mariachi Christian records my father would play on our record player, to the hymns I heard George Beverly Shea sing on the radio on Sunday mornings. From speaking Spanish to my abuelita on my father’s side, to speaking English to my grandpa on my mother’s side.  From Sunday dinners and hosting people from Mexico and Central America who only spoke Spanish, to speaking English at school with my friends.

All of these movements between language and culture helped prepare and shape me for the exciting journey the Lord had in store for me.

I was a young community college student at 19 and living in Brownsville, when my uncle, Conrado Hinojosa, who was then pastor of El Cordero Mennonite Church, asked if I would be willing to interpret his sermons from Spanish to English for the Mennonite voluntary service unit workers that attended church and could not speak Spanish.

I jumped at the opportunity to help others understand God’s word.

I donned a pair of headphones, sat in a little enclosed room beside the altar, and listened intently to his voice. Through the headphones, I heard what he had to say in Spanish and then immediately spoke his words into a microphone in English.  On the other side of my voice were voluntary service workers who placed small earpieces into their ears that were connected to a wire that they plugged into the pew in front of them.  Voilà, they were able to understand the messages in English and from that point on, my love of simultaneous interpretation began.

Simultaneous interpretation for me is the work of God’s Holy Spirit.

Over time, I have become so keenly aware that it is God and God alone who has allowed me to be His vessel and instrument between the speaker and the hearer.  When I have my headset on, I surrender my heart, soul and mind, and I know something special is about to happen.  As I listen intently to the speaker, I move through the speaker’s cultural nuances, idioms, speech pattern, and ultimately, to their heart for conveying the message.  My goal is to deliver the message using the speaker’s inflection, tone of voice, and pitch.  Not only that, I also hope to be able to capture the essence of the speaker’s heart — that is important to me.  There have been times when the speaker’s message was so powerful and moving that I have been moved to tears.  At those moments, I have felt a great sense of movement and purpose within my soul and have continued interpreting because I didn’t want the hearer to miss a single beat.  There have been other times when in my heart, intuitively, I have known what the speaker was going to say even before they said it.  At the end of the day I am exhausted, but as in all good work for the Lord, it was well worth it.

Looking back, I can see the hand of God preparing me for his work from a very young age through the many cultural experiences and opportunities He has given me.

Using those opportunities has allowed me to grow deeper in my walk with Christ and gain a deeper understanding of my role as an interpreter. Moving in and out of two languages has become the beat of my heart.